“I suppose some day I may be rather a
distinguished person in the entomological world,
and though perhaps the distinction may not be
the greatest I could have aspired to,
every rung on the ladder of fame will have been pleasant,
without one arduous or difficult step.”

Over the past month I read the edited diary of Margaret Fountaine, along with her biography, Wild and Fearless, by Natascha Scott-Stokes. I empathized with this woman (16 May 1862 – 21 April 1940) in so many ways. 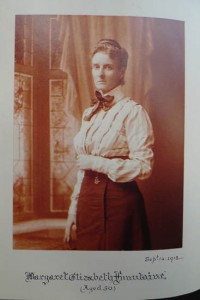 During Victorian times, she fought convention on many levels, would probably have been diagnosed with depression today, and at age 37 started her career as an entomologist.

“I was a born naturalist, though all these years,
for the want of anything to excite it, it had lain dormant within me.”
~Margaret Fountaine

She traveled to numerous countries on her own, meeting companions here and there but primarily was brave and independent enough to navigate railway systems, boat schedules and bike paths by herself. She even took to traveling by plane after her very first flight at age 69! In spite of some scary situations, numerous insect-infested accommodations and doubtless many insinuations about her peculiarity, she pressed on and pursued the itineraries that led to many butterfly discoveries.

“What a delightful life it was to be free, to wander where I could.”
~Margaret Fountaine

After several rejected “lovers” (in Victorian times and for her in particular the most that meant was a kiss) she finally found love at age 39, with someone not suitable in her circles. In spite of not being able to marry she forged a true companionship with this man 15 years her junior, aware that many ladies of her day did not have that privilege.

“All through the long, summer mornings we wandered through
the valleys and over the mountains round Amasia and
every day brought some new treasure to my collecting box,
for the butterflies were wonderful. …
We worked very hard and were always underfed,
but the days were not long enough
to contain all the happiness which was ours.”
~ Margaret Fountaine 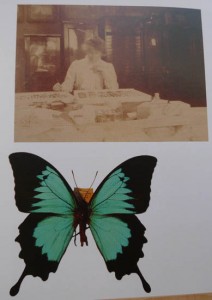 She recorded the life cycle of 8 butterflies until then unknown to science, but was not recognized for it because she was too busy in the field to go network with society.

“I turn my steps homewards, feet blistered and sore,
sometimes with the insteps covered with mosquito bites
and the irritating pricks of a
thousand tiny spurs of dried up grass seeds.”
~ Margaret Fountaine

I was crushed when her dreams started crumbling later in life (World War I, relationship strife, and financial losses), and then rejoiced when things began looking up again.

“Sometimes I would feel that I had a bright future before me,
but more frequently I was filled with apprehensions and misgivings.”
~ Margaret Fountaine

Later on she provided a record of Philippine butterfly life cycles that are being used for their conservation today.

“I was soon careering wildly after everything I saw,
though catching tropical butterflies was no easy matter,
the intense heat seemed to have a most invigorating effect on them.”
~ Margaret Fountaine 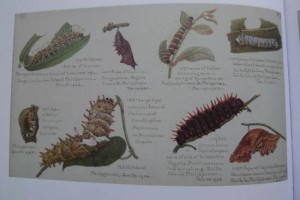 Rather than just capturing butterflies from the wild, Margaret began raising them from eggs and caterpillars, so that her collecting activity would not cause harm to the environment. Her butterfly-rearing notes appear to be lost, but she still left a collection of 22,000 butterfly specimens to the Norwich Castle Museum and four sketch books of butterfly life-cycles to the Natural History Museum in London.

She was a witty and descriptive writer, and her opinions are quite current even today.

“It is curious, how all over the world the strong feeling there is in men
to trample down and crush the weaker sex, not only in the East,
where the tyranny in this respect is carried to horrible extremes,
but in Europe too, and now in England.”
~ Margaret Fountaine (commenting on the Suffragette movement)

What struck me was how much she touched me. I was concerned for her during her early life when she became obsessed with a no-good man, felt for her when she was confined by Victorian etiquette, cheered with her when she received an inheritance, and eagerly read along as she carved out her new lepidopterist career for herself, while navigating a variety of interpersonal relationships. I could identify with her need to belong to society yet not be part of it, and a lot of her life experiences had me pondering my own life, family ties, and feelings about life.

“I loved the wild life I had chosen,
but sometimes I feel a longing for what my fate
might have been otherwise,
something so very different from what it really is.”
~ Margaret Fountaine

She was privileged in many ways, but in spite of that her life was messy, and there was heartache, loss and pain among her family and from those she held dearest. In spite of her words first being edited by herself (she stipulated her journals be published 100 years after she started writing them), and then editorialized further by the two books I read, her personality comes through across the ages.

“I want to see all I can of this beautiful world
before I have to leave it, and life is so distressingly short.”
~ Margaret Fountaine 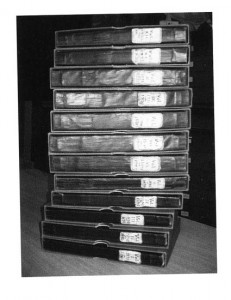 For that question of: “Who would you’d like to meet from the past?,” It’s a tough call between Margaret and Maria Sibylla Merian. I think a field trip to the Field Museum’s entomology department followed by a visit to the Judy Istock Butterfly Haven with both of them would be fabulous.

Now that I’ve read about a Victorian lepidopterist lady and one from the 17th century, the quest is on to figure out what happened in the century between them. History sleuthing is such fun!

“I am not afraid to do what I think is right and
not afraid to sometimes do what other people may think is wrong.”
~ Margaret Fountaine

One thought on “Empathizing with Margaret Fountaine”