â€œLauren Levato is becoming one of Chicago’s favorite daughters,
drawing, collaborating, assisting and teaching other artists.
In her new drawings she looks at herself with hybrid possibilities,
while staying in touch
with her poignant animal instincts and sympathies.â€
~ Paul Klein

As one of Lauren Levatoâ€™s drawing students, it has been a pleasure to watch her Wunderkammer show evolve into the gorgeous exhibit it has become. The Wunderkammer exhibit opened on January 11, with much press coverage prior to it, and numerous visitors swarmed through and responded to each piece.

But first, letâ€™s look at the artistâ€™s opening night outfit! What a powerful yet whimsical ensemble of her sheer blouse (offering a peek at the trademark Hi-Octane Redhead tattoo, the awesome pin-striped skirt, the black-ribbon stockings and the super-cute shoes. 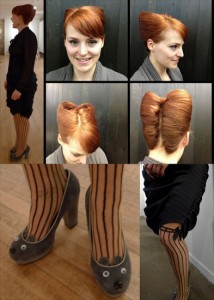 Working primarily in black and white since 2007, Lauren began adding color to her drawings in November 2011. Since last year, Laurenâ€™s vision of her show at Packer Schopf Gallery has shifted from large scale drawings that included a combination of insects and anatomy to the Wunderkammer self-portraits now flying off the exhibit walls. 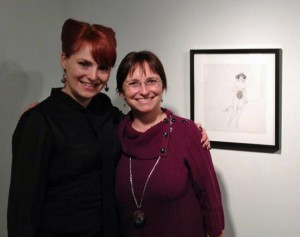 Me with Lauren and her portrait as St. John the Baptist
photo by Rory Coyne

Having resisted self-portraits for yearsâ€”they made Lauren angryâ€”over the summer a breakthrough came and Lauren drew Self Portrait as St. John the Baptist, which references her familyâ€™s religious background as well as St. Johnâ€™s subsistence on locusts. Inspired by historical anatomy flap-books, Lauren â€˜outlinedâ€™ her body, with embellishments and symbols focusing on her head and her womb (which has me reviewing Carolyn Myssâ€™ Anatomy of the SpiritÂ and pondering logic vs. intuition as well).

â€œThe sophistication of the work results
not from visual grammar, but from linguistic grammar.
Each of these paintings is a sentence:
‘I am Lauren Levato, and I am [ ] and [ ] and [ ]
and that involves [ ] and [ ].â€™
They are elaborated reflections on
the consequences of a series of self-recognitions.â€
~ Daniel Maidman

The self portrait series references Laurenâ€™s relationship to her nuclear family and family history, which also gives rise to the broader spectrum of communal lore, his(/her)story, legends and the symbols associated with those. The second portrait, Self Portrait as Thief in the Night emerged from the loss of Laurenâ€™s nephew, who was stillborn. 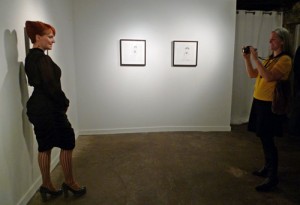 â€œThe day my nephew Leo died was the first time I ever saw a red fox and I was captivated. It was in the back yard of a home in Evanston and was so content and playful and it stopped me in my tracks and made my brain stop the active process of confused grief. It was an astounding moment in the middle of true pain, though not as much pain as my sister was feeling to be sure,â€ Lauren said.

â€œWith a stillbirth you expect to come home with a warm, cooing baby and instead you are planning a funeral – it’s the worst kind of grief, frankly. It’s very thief in the night kind of stuff, a fox in the henhouse: you go to sleep with a full roost and wake up and everything you cared for and expected is ripped away from you.â€

â€œThis is one of the only pieces that directly
makes intentional reference to pregnancy/womb.
Most of the pieces are more about psychological/emotional states.â€
~ Lauren Levato

Self Portrait as My Sisterâ€™s Keeper was an extension of that grief and the emotions surrounding Laurenâ€™s sister, which led to Self Portrait as Forgetting, another expression of grief.

â€œThe undone ribbon, well that’s a direct reference to the ribbon tattoo on my arm, which is the â€˜death madnessâ€™ tattoo and is about the grief I had when my dad died. So here we go again, coming undone, ribbons on the loose, tethers cut, into grief,â€ Lauren said. â€œNow the goat, that’s always a reference to my dad.â€ 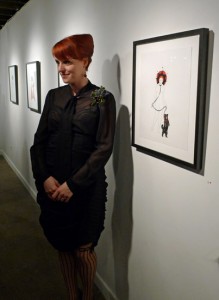 To complete the triptych of goats, Lauren experimented with a larger size drawing (which also led her to decide on a favorite scale for her drawing process) and also a different imagery of the goat. Self Portrait as Capricorn â€œwas the only piece that came to fruition as I went along. All the other pieces are pretty much 95% worked out before I sit down to draw them. So I decided to just push it with that piece and I made the hair so huge that it visually needed a background element and I spent a few days sketching around on the piece itself to work out the exact elements in the â€˜hair universeâ€™.â€

â€œBy taking the goat OUT of the body (removing dad)
and presenting him externally;
now we can get a good look at you/
now I can control this thing instead of it controlling me.Â â€œ
~ Lauren Levato

I personally did see a shift from the Capricorn to the subsequent drawings. There is an evolution from just adding a single color to each portrait to adding more range as the portfolio evolved. From Self Portrait as Siamese Saints, each subsequent portrait has at least two colors, up to four.

The drawings also evolve from the microcosm of nuclear family to referencing broader historical myths and art. Self Portrait as Siamese Saints references a painting of Saint Lucy by Francesco del Cossa, and Self Portrait as Capricorn represents the tapestries Lauren loves, from the ones currently on display at the Field Museum’a MaharajaÂ exhibit to the medieval Unicorn tapestries.

â€œThe self-portraits are loose and fluid,
the work of an artist just discovering a subject
and giving herself plenty of space to evolve.
But while much of Levato’s work can
be read as an effort to edit and control,
she is also an exemplar of the dizzying freedom
that awaits when you simply let go.â€
~ Sarah Nardi

Self Portrait as Siamese Saints actually preceded the Capricorn drawing and references Laurenâ€™s best friendÂ Skye Enyeart-Rust and their joined histories with their fathers. â€œShe’s St. Apollonia and I’m St. Lucy, who were both martyred for their devotion to God and refusal to marry/have sex. So the rabbit is then a reference to the old â€˜rabbit done diedâ€™ kind of medicine–inject a woman’s urine into the skin of a rabbit and if it dies, she’s pregnant,” Lauren said. “I love quackery throughout time. And the reason for their deaths is religious quackery at its finest.â€

â€œI like to work in threes.
There’s something very literary about it
but also very maiden/mother/crone about it as well.
You can really tell a story in threes.â€
~Lauren Levato

Self Portrait as Prophet is the most personal of Laurenâ€™s drawings, reflecting her love of her canine companion, and also referencing a dream, which she explains on her web site.Â â€œThe animals/symbols have a system of development, each one is different but it follows the system: What story am I telling? Is this animal/symbol/gesture communicating that? And, usually, what do I need to cut out (what is too much visual information)?â€ Lauren said.

The last three portraits, (Hex, Caul, St. Ursula) have the most vibrant colors, a reflection of Lauren embracing the use of color more, and becoming bolder in her self-expression as well. Only two portraits have red hair, which was part of the process of adding new elements, whether it comes to Lauren in graphite or color, and how the composition and aesthetics play out. â€œItâ€™s about the power of the piece,â€ she said.

â€œLevato, on the other hand, designs her work with a meditative calm.
Emerging from science, she applies an artistic equivalent
of the dissectionist’s practice: the bloodiest of matter,
the most methodical of excavations.
Her image-objects are partly defined
complex symbols representing internal states.
She has developed the ability to relateÂ important visuals in her life
to specific aspects of her own state of being.â€
~ Daniel Maidman

I do see the series of her drawings as an emergence from micro to macro. It is an evolution of Laurenâ€™s relation to her nuclear family, to people outside her family, to the world and its cultural historyÂ at large. She explores and gives vision to her place in this world as a self-contained, empowered woman. As such, she is willing to embrace all aspects of her selfâ€”whether as legendary and glorified saint or prophet, or as the vilified hex and thief in the night.

Packer Schopf Gallery is located at 942 W. Lake St Chicago, IL 60607. The exhibit runs through February 16, in addition to three solo shows: Wilderness of Mirrors by AndrÃ©a Stanislav, Psychedelic by Bruce Riley, and Zodiac by Deborah Baker. Gallery hours are Tuesday through Saturday from 11:00am to 5:30pm. The online Wunderkammer exhibit can be perused here. 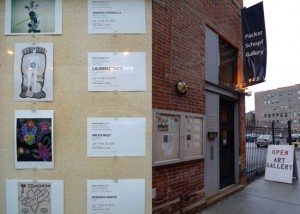 “Our path with her art is an experience
of the intellectual and emotional texture of Levato’s journey.
We see her walking.
We do not see, entirely, where she walks.â€
~ Daniel Maidman

This exhibit is the first part of Laurenâ€™s Wunderkammer: A Year of Curiosities fundraising project in November 2012 (Which exceeded its goal at $12,243 with 108 supporters). Lauren will be working on the perks of Wunderkammer contributors in the coming months, as well as completing commissions. Her drawing classes are set to resume in March. Laurenâ€™s website is www.hioctaneredhead.com, and you can follow her very active Facebook page.

Press coverage of the show and the Wunderkammer project includes: 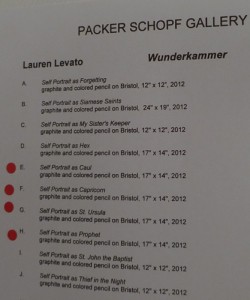