January has always been a sluggish month, but I didn’t know what I was in for in February. Apparently the polar vortex did not kill off cold viruses, and one outing in early February caused me to be felled for almost 3 weeks. Normally I can fend off a cold by resting for 2 days, but this time the fatigue, difficulty breathing and stuffy head persisted in keeping me down a full week.

Then as I googled the symptoms to make sure it wasn’t anything else, I learned I would be contagious for a full 2 weeks. So even when the worst of symptoms passed I still had to quarantine myself an extra week. It’s been a long time since I have been this sick, and it was an exercise in patience. 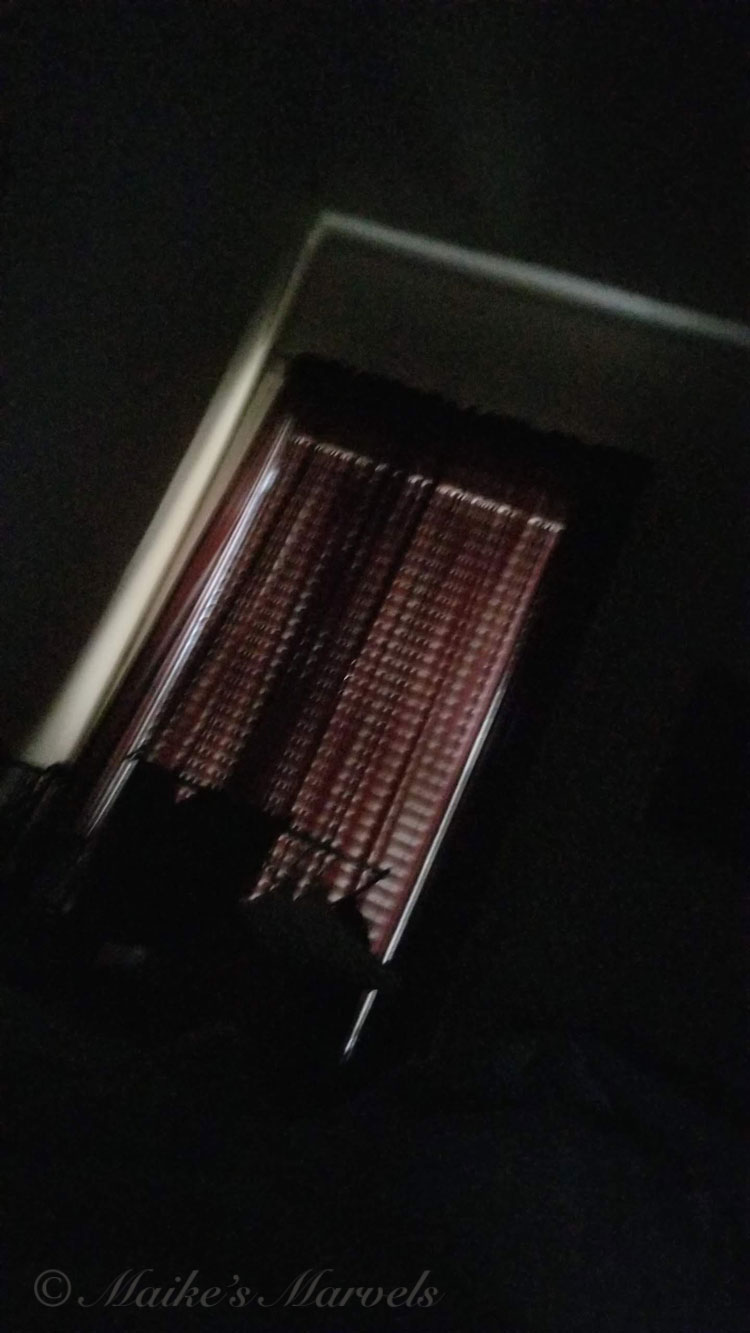 Sure, I could have suppressed symptoms with various medications, but I never feel comfortable ignoring my body. Plus, it still wouldn’t have knocked out the virus itself. So I slept a lot, read Harlequin novels thanks to my library’s online eBook library, and waited for my brain to unstuff itself.

After the coughing and nose blowing and sinus headache subsided I found out I had pulled a neck muscle from coughing so hard. Fortunately I was able to make a trip to Walgreens to get more pain meds, since I was out of nonsteroidal anti-inflammatory drugs (NSAID). The other fun part is barely making it to the bathroom during a coughing fit, ’cause the bladder plays along! 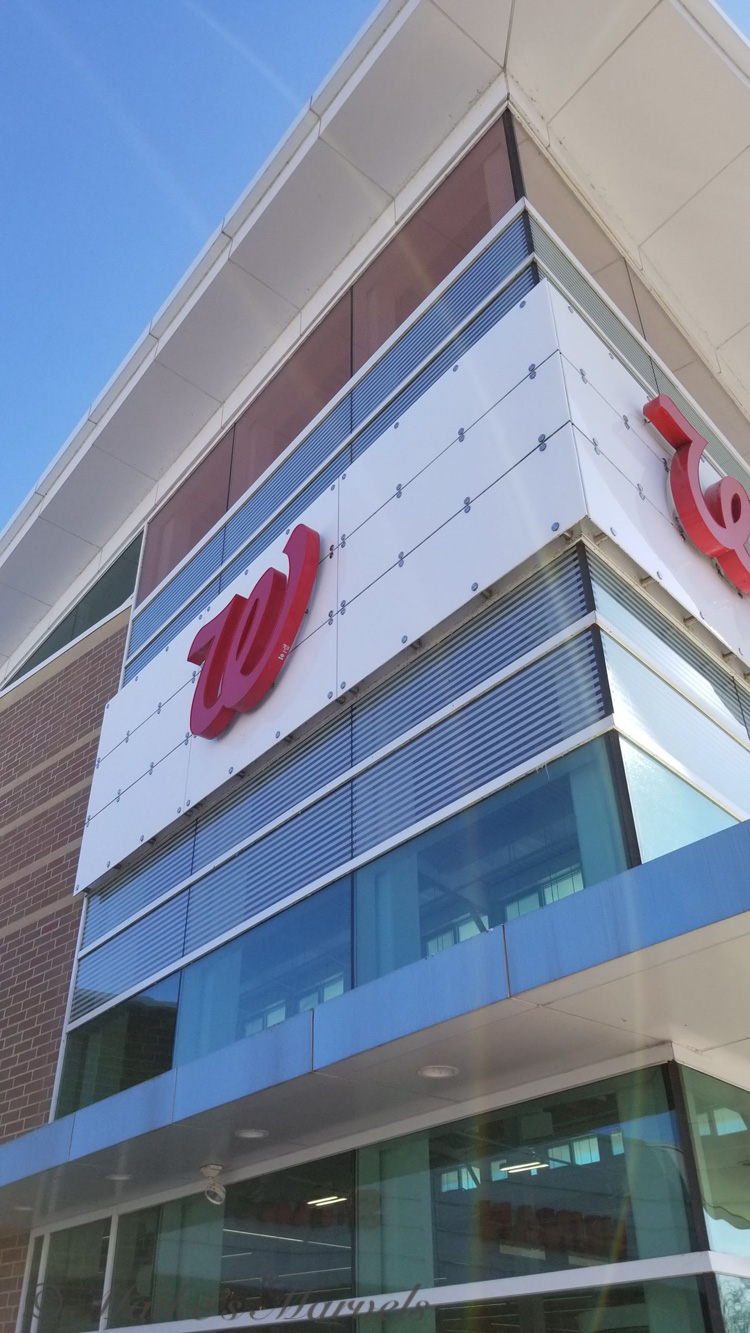 Being sick by yourself is interesting. I had offers of soup to be brought to me, but I really didn’t want my friends to catch this bug. Plus, I am more like an animal when I am sick. I just want to hide away until it is all better again. I was able to get up and make boxed soup, even with a non-existent appetite. The day I was able to walk to Walgreens I got some amazing Ramen Chicken soup from Hunan Spring next door.

Then 2 days later I drove to Trader Joe’s and got my Nature’s Flu Shot ingredients. I had not been diligent about my fruits and veggies before my illness, so this home remedy needed to be back in rotation.

Nature’s Flu Shot is attributed to Dave Sommers, though I can’t seem to find the original source link. 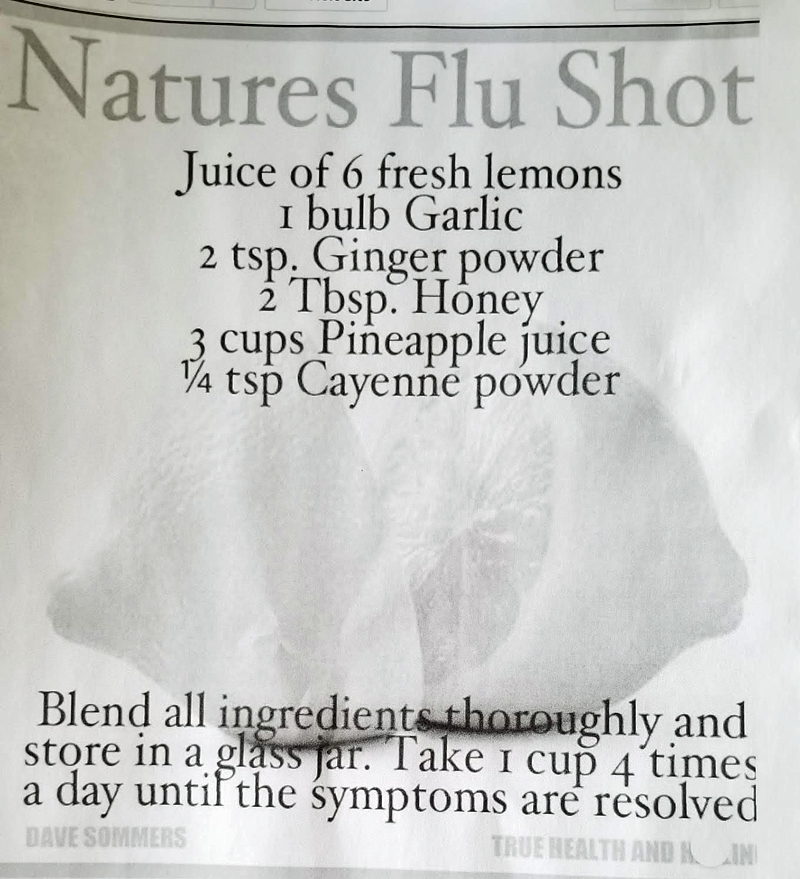 The ingredients have a variety of health benefits.

Lemons are a source of vitamin C, “which keeps our immunity in check. But they are also full of antioxidants that are believed to have a ton of health benefits which include protection against heart disease, cancer and the aging process in general,” according to organic authority.

Garlic contains allicin which gets activated when crushed or cut. “Allicin holds anti-fungal, antiviral, and anti-bacterial properties, which promote health in a host of ways, from ridding the body of pests to treating a cold. Diallyl also contains anti-fungal properties, but it’s more beneficial for reducing cholesterol, boosting the immune system, improving blood circulation, and detoxifying cells.” More interesting uses of garlic are here.

“Raw ginger is rich in volatile oil and contains phenols, vitamins C and B6, magnesium, potassium and copper. … it has an anti-inflammatory effect and may also lower blood pressure,” according to Conscious Style Magazine.

“Honey’s highly absorbable sugar and B12 coenzymes make it one of the most powerful brain foods of our time. Plus, raw honey repairs DNA and is extremely high in minerals such as calcium, potassium, zinc, selenium, phosphorus, chromium, molybdenum, and manganese,” says Conscious Style Magazine. “When it comes to foods that heal, honey, in its raw form, is a secret weapon against infectious illness. When you’re dealing with weakened immunity and feel like you’re extra susceptible to catching colds, flus, stomach bugs such as norovirus, and food poisoning, raw honey acts as a healing food to assist your body in keeping a strong first line of defense by strengthening neutrophils and macrophages so they can fight off pathogens.” 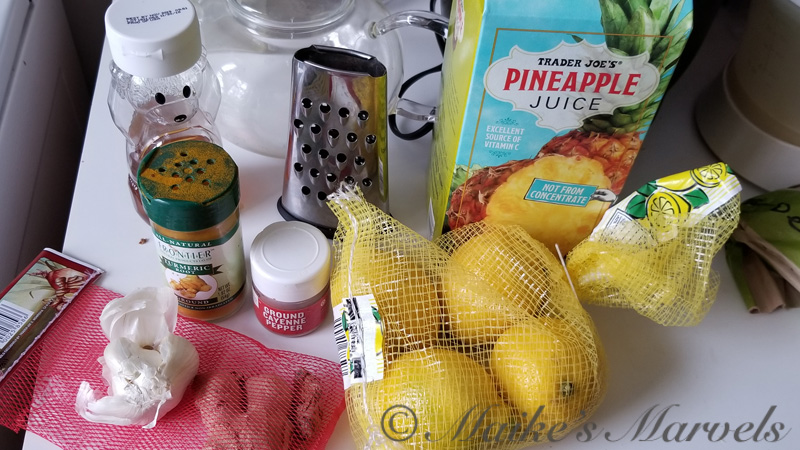 “Pineapple juice contains a mixture of enzymes called bromelain, which has strong anti-inflammatory properties. It’s thought that bromelain can help with respiratory problems that are tied to allergies and asthma. It’s also thought to have mucolytic properties that help break up and expel mucus,” according to healthline.  “Pineapple is also helpful for bruises, sprains and strains by reducing swelling, tenderness and pain. [It can] help relieve rheumatoid arthritis symptoms and reduce postoperative swelling. Additionally, the bromelain contained in fresh pineapple can relieve indigestion. This enzyme helps break down the amino acid bonds in proteins, which promotes good digestion.” More cool Pineapple properties are on Feminist Women’s Health Center.

I love filling up the Vitamin C tank in winter. “Vitamin C helps build and repair bodily tissue and promotes wound healing. The body uses vitamin C to help metabolize fats and cholesterol, absorb iron, and synthesize amino acids and collagen. Collagen is one of the primary building blocks of skin, cartilage and bones. Vitamin C also decreases the severity of colds and infections.”

“Cayenne is wonderful medicinal food for moving phlegm out of your system …. It actually ­benefits digestion and can help ward off illness when flu and colds are making the rounds,” via Consious Lifestyle Magazine.

“Turmeric is considered a healthy spice because it contains high levels of curcumin, as well as sterols, resins and volatile oils. It is rich in vitamins C, B3 and B6, and also magnesium, manganese, potassium, copper, iron, zinc and omega-6 fatty acids. … It is known to be a good antiseptic, effective against a variety of fungal and bacterial infections, and research has confirmed that it may also help to inhibit the spread of cancer by destroying mutant cells and can enhance the effects of chemotherapy and radiation therapy…. This healthy spice is thought to have significant potential in the fight against degenerative diseases such as Alzheimer’s, type-2 diabetes, arthritis and pancreatic disorders. … Curcumin also reduces histamine levels, and may increase the production of cortisone in the body,” says Conscious Lifestyle Magazine. 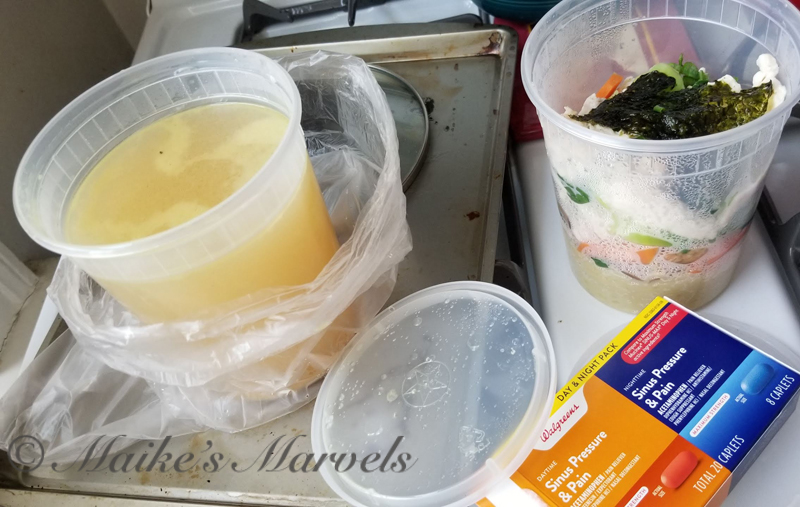 I am always grateful for my health. It is a blessing to be alive even on less-than-stellar days, so to be this invalid helped push that to the forefront. Two weeks of isolation is a bit much once your brain is restored, so I am happy to re-enter the world now and get back into a social routine, along with getting my blog post ideas back on track. 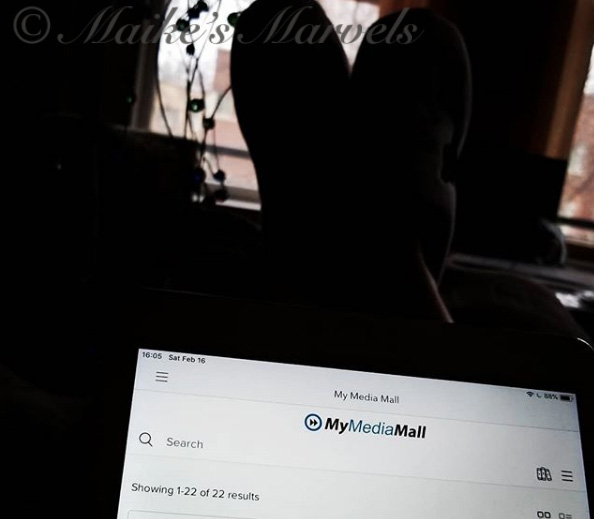 And then it is off to catching up with my original February plans. While they were still hibernatory, they certainly didn’t involve laying in bed or on the sofa for a good week and a half!