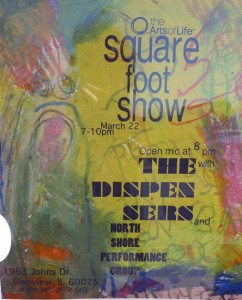 I submitted to this call for art without having seen the studio (technically a no-no, but hey, Iâ€™m a newbie at this). I poked around on the web site and saw a lot of very vibrant art, which prompted me to create Red Hot Love, a departure from my usual color scheme. 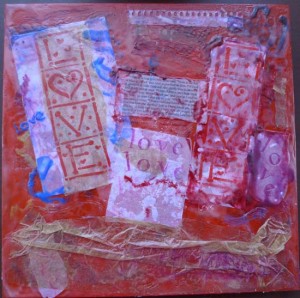 Because it felt so different, I also grabbed Migrant Danaus on the day of submission, in case Love didnâ€™t fit in. (Later, Radar Love by Golden Earring played on the radio when I drove over to the opening reception.) 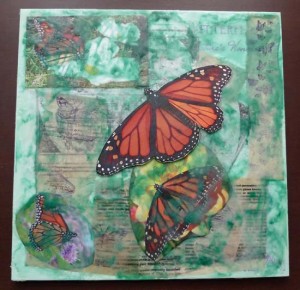 What I found when I submitted my pieces (in person) was a bright and large space in an unassuming suburban commercial complex. Walking in, you see the gallery space, which would be a storefront in other settings. But then toward the back a much larger area is revealed. One half is studio space and the other is a multi-purpose room. For opening night, that space was converted to a theater area, with a stage and seating. I dropped off both works, letting the staff decide which one to choose during the curating process.

Arts of Life strives to empower people to “create an amazing artistic and personal vision for their community”. The organization â€œis a community of people with and without disabilities creating an artistic culture to realize our full potential.â€ 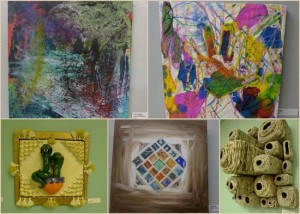 In addition to hosting quarterly art exhibits, the studio space is offered to people with special needs. Between 9 am and 3 pm on weekdays, artists can hone their visual arts, performance arts and musical skills. Some residents come daily, and others every other day. The North Shore Studio is a fairly new space, while the Chicago location has been in operation for 12 years. 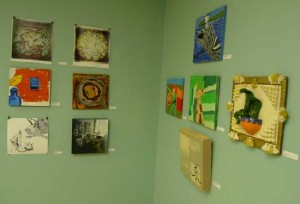 I met resident artists, their friends and relatives, bumped into recently made friends, and made new connections. A few people were drawn to Migrant Danaus, and I even got nice comments about Red Hot Love. 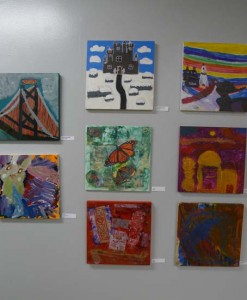 Rainbows, castles and bunnies next to my works 🙂

After mingling, noshing on snacks, having wine or juice and having artists introduce their work, we were ushered to the other room for an open-mic performance by the resident artists.

These performers showcased solo songs and group songs including: Light my fire, I believe I can fly, Come together, and My girl. We were also shown reenactments of the Lion King, Peter Pan and Twilight. The North Shore Music Ensemble has a web page here. 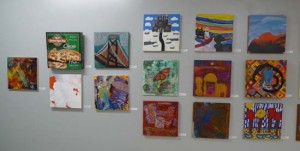 I found that the vibrancy of the visual art work is a true reflection of each person there. The theater space may have been dark, but everyone (including the audience) shone as they got caught up in the music and the acting. We laughed, we clapped, we sang along, and there was pure joy in the act of creative artistry. The environment was so inclusive, supportive and empowering. It is an honor to have my work among such creative spirits. 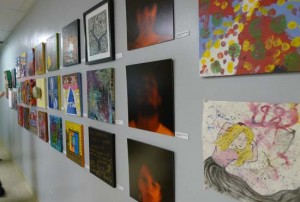 Apparently a Zombie Prom is next, a benefit with live bands at The Empty Bottle. What will I wear? 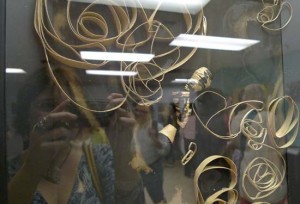 Â *It is called a square foot show because all pieces had to be 12 inches wide x 12 inches tall, which is equivalent to the American “foot” measurement.