Princess Lasertron posted about how music affects her in her third Radvent post.  I’ve always been conscious of lyrics as a word girl, and the meaning of the song determines whether I download it or not. Lately a lot of catchy tunes actually reference dysfunctional relationships or break-ups (why does my radio insist on playing Maroon 5 so much?), bad attitudes or violence.

With iTunes, I’ve enjoyed making playlists based on mood. In 2010 I made a “Power” playlist to help me feel more in control of my life, when I was learning to be more empowered. I also have a “Fun-Happy” list that pepped me up during my commute to work, because I was dragging many many mornings. Gotta Get Up by Harry Nilsson and other songs did put me in a better frame of mind.

Speaking of music, FUSEDChicago will be participating in a Rhythm in Wax exhibit in St. Charles this month. My Music Scroll diptych was accepted into this show. The show opens with a concert by the Fox Valley Orchestra on December 15. Midwest artists working in encaustic are presented in an exhibit of abstract, musically inspired work. A reception will be held from 6 to 7 p.m. with the concert beginning at 7:30 p.m. Directions and additional show information is here. 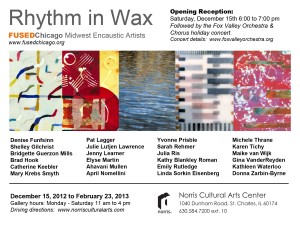 Because my focus has been on other investments this past year, I’ve only reshuffled songs, but not added new albums to my playlist. I tried Pandora a long time ago but couldn’t find the artists I liked, so I decided to stick to what I know. New songs came to me through the pop-tune TV shows I watched, but now that I don’t have Cable, that lags behind as well.

Uh-oh, is that how an adult becomes un-hip???

Anyway, my peppy, “let’s get out of a slump” playlist includes:

Walking On Air by Kerli

Touched By The Sun by Carly Simon

Here’s a recap of what was on my audio tape German Pop playlist before I left for the states.

And my Christmas Playlist, which I would like to update with a new album this year is here.

Any suggestions on adding to these with more current or additional classic songs?

I haven’t listened to Princess Lasertron’s full playlist yet because she noted some songs have explicit language. As a teen I was perfectly OK with throwing swear words around, but when I moved to the states I realized that the German words were mostly farm-related language (at least in my world). When you start by literally translating English curses into German, it leaves a creepy image in your head, rather than a reference to a pig-dog or variations on cowdung. WHAT was that about a mother??? Ewww.