On Tuesday, I attended theÂ Crowns, the Gospel MusicalÂ with my friends, and with the theme being hats, we decided to adorn our heads as well.

Since I tend to have trouble finding hats (theyâ€™re always to big on me), I opted for a fascinator Â instead.

A vintage store told me fascinators are â€œa modern, British Royal Family thing,â€ but my instinct proved right that theyâ€™ve been around for ages: Some fascinating facts and historical notes about the Fascinator.

â€œDuring the reign of Louis XVI, some women of the French court embellished their elaborate, sky-high coiffures with plumes and sprays of flowers, while others drew stares of amazement at their poufs au sentiment, a display of cherished memorabilia nestled in their bouffant hair.â€

Even Marjorie Goodman wore a ‘fascinator’ bow in a 1918 photograph. She is the daughter ofÂ Kenneth Sawyer Goodman, after whom the Goodman Theatre is named. 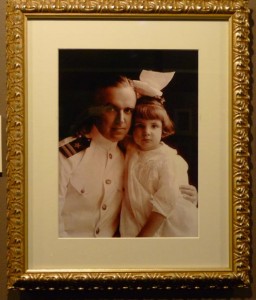 My initial visual came from a long-ago fascinator post by Princess Lasertron.Â Having made her headband, I felt confident to take on a fascinator headband project of my own.Â I searched for some tutorials online, and liked this feather fascinator, but I could not find any bagged white feathers in local craft stores last week. Michaels had some fun flowers I wanted to play with, Vogue Fabrics had bins of lace appliques and bridal pins, and I also got the birdcage tulle and a fascinator piece from there. 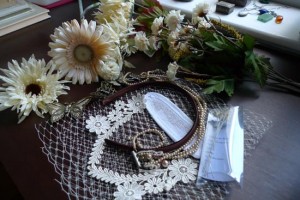 I looked up birdcage veils, and took cues from this tutorial for my veil on the headband.Â Since I want the headband to be versatile, I decided to wire-wrap the veil to the headband instead of gluing it on. 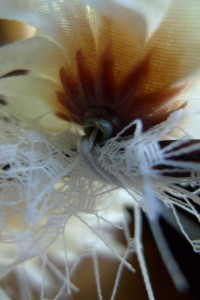 This will allow me to recycle the veil for something else. 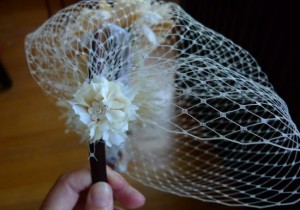 I sewed and hot-glued the flowers and a butterfly from a Charming Charlieâ€™s necklace to the fascinator piece. 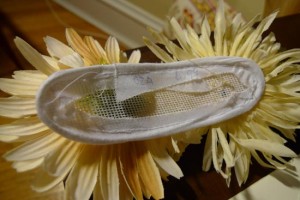 I then glued this piece to the headband. 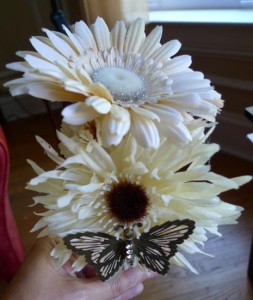 The pearl necklace was a vintage findÂ Crystal NeubauerÂ gifted me with, and adds a touch of festiveness.Â I wire-wrapped this with the bridal flowers as well. Itâ€™s secure enough for the night, but again I can remove this for a dressed-down version. 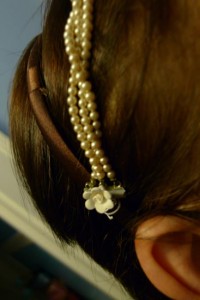 Iâ€™m really happy with the result. 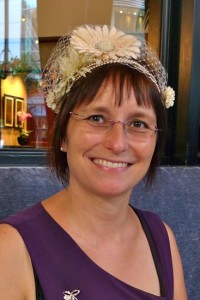 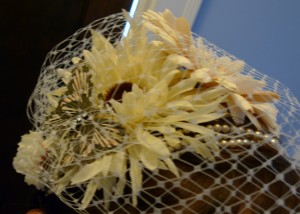 At the pre-show dinner, even my risotto had a fascinator. 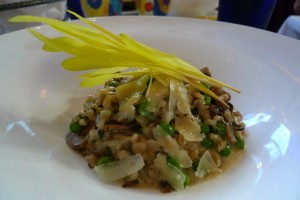 The Musical itself was wonderful. The hats become reference points for reflections and observations about life by five women, who try to reach out to a struggling teenager with these stories. As the title hints at, there is Gospel singing, but it is steeped in the vast history of African music, with nods to modern hip-hop as well.

The hats are fabulous, of course, as is the set, the costuming, and the flow of the play, produced and directed by Regina Taylor, whom I met at the Black History Month Dinner. It was universal, had heart, and also taught me a bit about culture and history. If you’re in Chicago, I highly recommend getting tickets while the show is still on through the beginning of August. 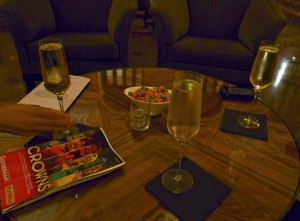 After the show, we flaunted our hats a bit more, now having learned how to wear them and what not to do when greeting someone in a hat. 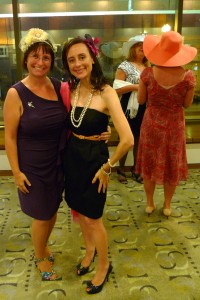 Do you think I should wear it to Bug Fest Friday evening? It does have a lepidoptera on it…

One thought on “Making a fascinator headband”