My last formal art class was in 1989. I got a stingy B+ on a sculpting project, which I knew I was actually really good at, but drawing and painting grades went downhill from there. In those classes we were assigned topics such as â€˜draw a house with a certain painting techniqueâ€™ or â€˜work on perspective by using rulersâ€™. We didnâ€™t draw from life, but from instruction supplemented by our imaginations. And I used color.

While I have doodled over the years and like the few drawings I did make, the lack of encouragement from my art teacher made me believe I could never be a visual artist. Â Then at The Creative Connection (new oneâ€™s in the works!) someone asked me why I didnâ€™t consider drawing my own card motifs instead of using rubber stamps (which often are subject to copyright restrictions when putting items up for sale).

Fast forward to February 18, 2011: Day 1 of my Multi-level Drawing class. First assignment: draw the still life the teacher placed in the middle of the room with just a pencil. NO colors.Â I had no idea how difficult it is to translate a purple hydrangea leaf to a black and white rendition, much less a cream-colored tulip! ï¿¼ 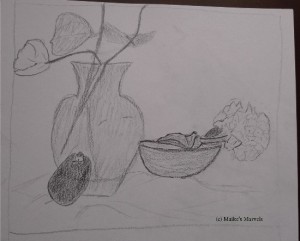 That first day all my: â€œyou canâ€™t drawâ€â€”â€œthis looks horribleâ€â€”â€œeveryone else is so much better than youâ€ fears came bubbling up. But I soldiered on (â€œI paid for this class so I am going to see it through!â€). When the third hour rolled around I was quite discouraged as everyone else had gotten praise for their drawings except me. The teacher and I did discuss some forms of experimentation and at the end I decided to play with a black background. Suddenly my piece became the subject of an impromptu lecture of how creating background textures can bring a drawing to life. Phew! 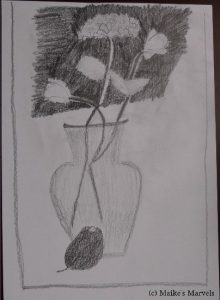 I cried tears of relief driving home, not realizing that my childhood self had held her breath in trepidation through those long 3 hours. I placed my pictures in a central place at home where I would pass it by as tangible proof that my art does have value. ï¿¼

The class was held once a week for 5 weeks. In these past five weeks I have learned quite a few things:

This was especially part of the last class, where we were instructed to draw loosely and not be neat about our lines. Using charcoal and conte, we experimented with how smudging and pentimento can create character in a drawing, giving it energy and life that a detailed replication of the subject would not. ï¿¼ 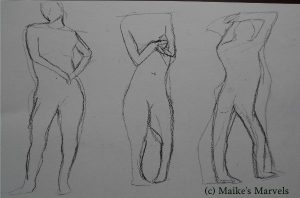 Our culture of instant gratification makes us feel we have to do things perfectly right out of the gate. We forget that things take practice and adjustment. Unintended â€˜smudgesâ€™ add more depth and energy to life than being so self-conscious we donâ€™t try anything at all.

In class, this meant looking at objects from a compositional perspective. Instead of focusing on drawing each hydrangea leaf in detail, or replicating the shadows and light as it appeared in front of us, we could take artistic license and change shading or perspective to give our drawing more depth. ï¿¼ 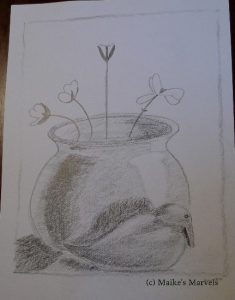 Personally, it meant that just because someone had labeled me non-artistic in childhood, I didnâ€™t have to hang on to that label. We get caught up in what we were brought up to believe, but there is nothing wrong with departing from that and trying a new point of view.

3. Look at how things relate before getting bogged down in details.

When we drew hands, the temptation was to draw finger by finger. Instead, we were instructed to look at the pose of the hand overall, and work on the lines and points within the drawing to create the shape of the hand. That was a magical day! ï¿¼ 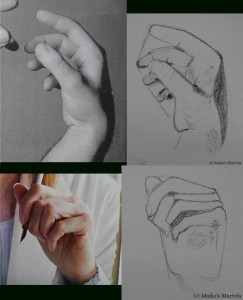 In life, we sometimes get too concerned with the details and finishing checklists to realize how our actions matter in relation to life as a whole.

4. Black and white have a lot of hues in between.

I love color. My favorite color is the rainbow because I just canâ€™t settle on one. Drawing in black and white seemed so inhibiting. But looking at the drawings and demonstrations of the other students, I saw that there is sooo much texture in shading and that a black and white drawing can have just as much life as one in all colors of the rainbow. ï¿¼ 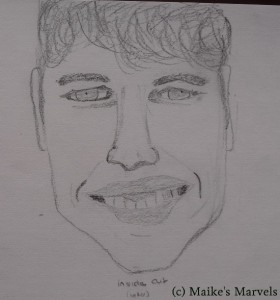 There is a lot of variation in the depth and tone of grey shades, which reminds me that many things have various alternatives beyond â€˜either/orâ€™.

5. No matter how talented or experienced the person next to you appears to be, they have their insecurities too.

Over the five weeks I realized that I was the only one who hadnâ€™t been consistently drawing over the past few years. I also learned that I was more of an â€˜illustratorâ€™ than a â€˜drawerâ€™ (which will make me feel better until I take an illustration course). However, during the various lessons the teacher would make statements where even the â€˜advancedâ€™ students would exclaim â€œthatâ€™s hardâ€ or â€œscary.â€ 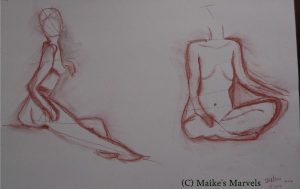 We tend to put others on pedestals, presuming that they have much better lives than we do and that they have their acts together. All humans will always be human though. ï¿¼

Remember that you are fine just as you are, and that whatever gifts or inspiration you are given is valid. Act on those prompts without worrying what others might think. 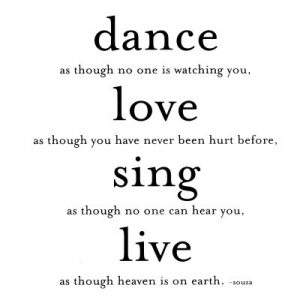