Last week I commuted downtown and decided to stroll over to the Chicago Cultural Center. 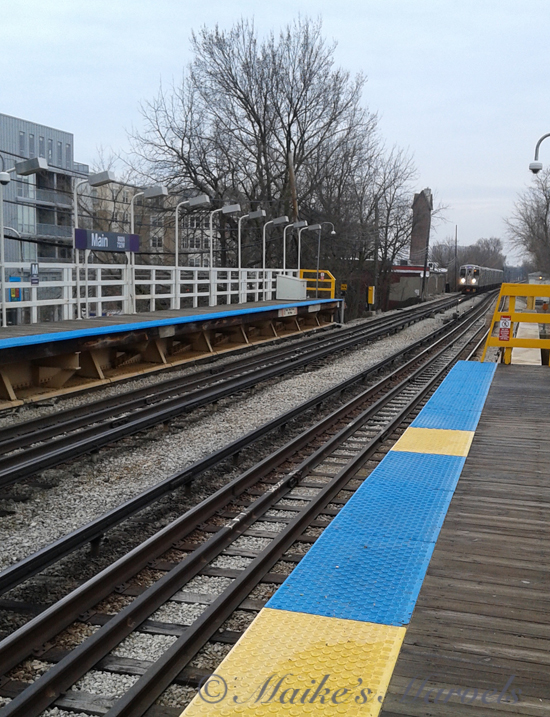 First, Angel and I passed the Monument with Standing Beast by Jean Dubuffet.

I walked in on a prototype of the story chair from the Conrad Sulzer Regional Library, which apparently doubles as a table and turns into a throneÂ as stories are told. 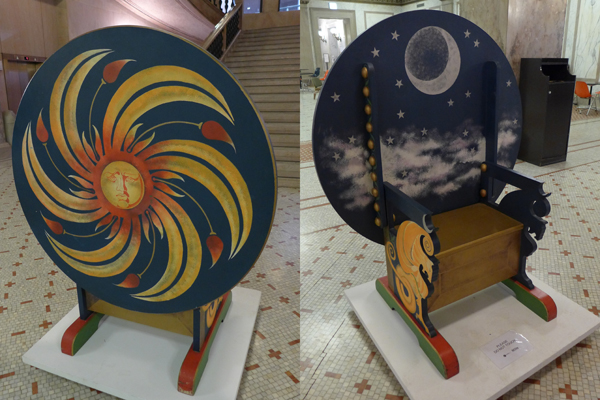 Then I decided to start my exhibit exploration upstairs, whereÂ Eugene Edaâ€™s Doors for Malcolm X College are on display. 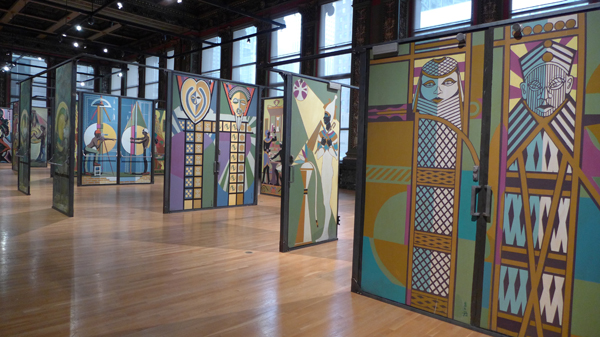 This exhibition featuresÂ all 32 doors painted by Eugene EdaÂ for the stairwells of the original, now demolished Malcolm X College. Painted in 1971 they are considered a landmark of the Black Arts movement in Chicago. 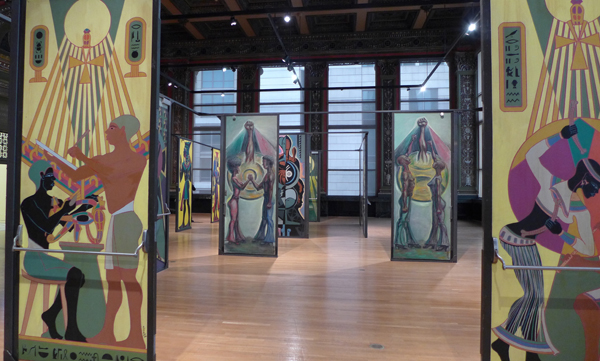 The doors are thematically distinguished in 4 categories, based on their original stairwell locations. 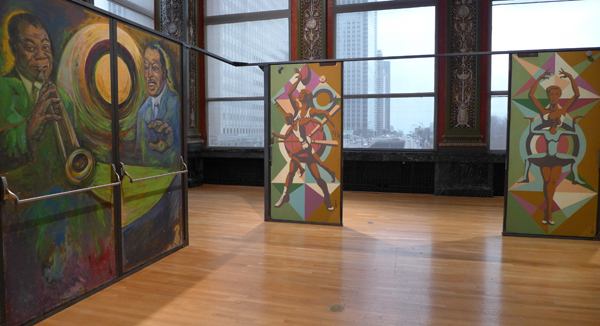 Eugene Eda started with ancient Egypt as the foundation of his works, and then narrates the history of African culture and heritage with the other door themes.Â I was fascinated by all the symbolism represented in stairwell B, and want to learn more about AdinkraÂ symbols used in West African culture. 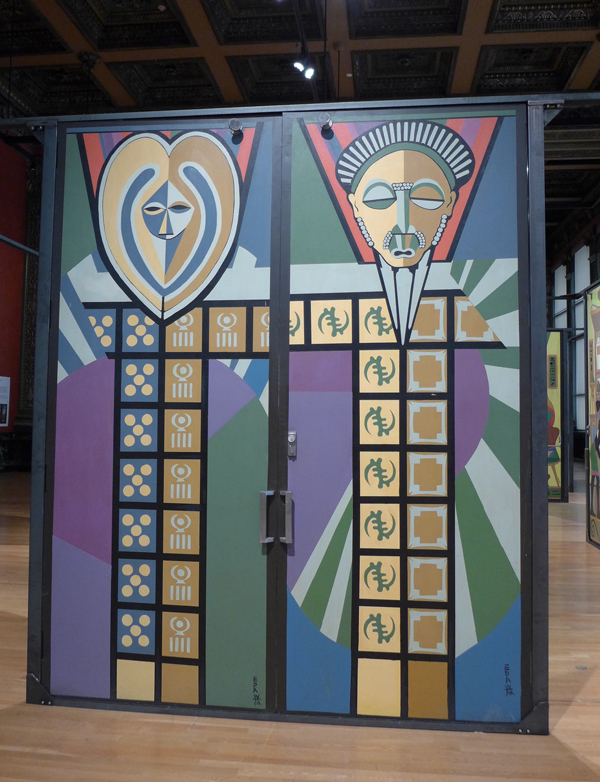 Fortitude, unity and community are themes for stairwell C, showingÂ scenes representing the various areas of study at Malcolm X College (currently arts, general studies, science and applied science), along with depictions of family. In Stairwell D,Â according to Michelle R. Perkins, the doors are to remind those passing through to “rise above anything that imprisons the body and the mind.” 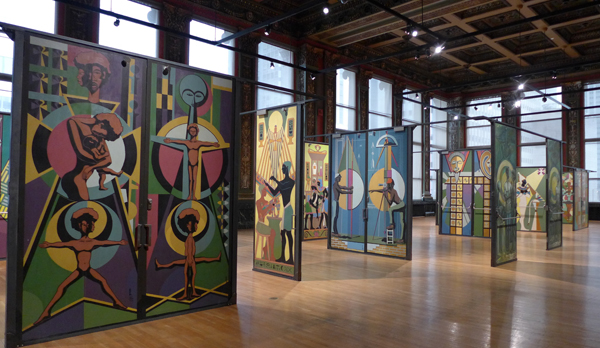 Part of the interior design of the walls in this room had the inscription “lÅ«x et vÄ“ritÄs”, meaning light and truth, which was very appropriate for this particular exhibit. As a European, I have a cursory acquaintance with American History, andÂ even my world history education was quite Euro-centric, so learning more about Black History, African(-American) culture, Indigenous culture and what is essentially ‘non-white world history’ requires awareness and alertness. 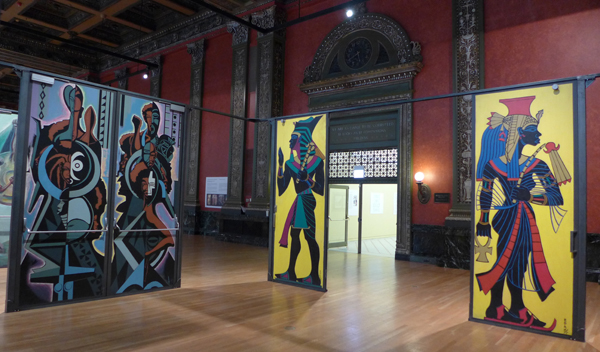 I am grateful there is much activism to have these stories told and celebrated. Attending art talks and exhibits about marginalization is uncomfortable, but makes me a better human being who can hopefully respond better to the impact oppression has had on any group than be clouded by my own perceptions. 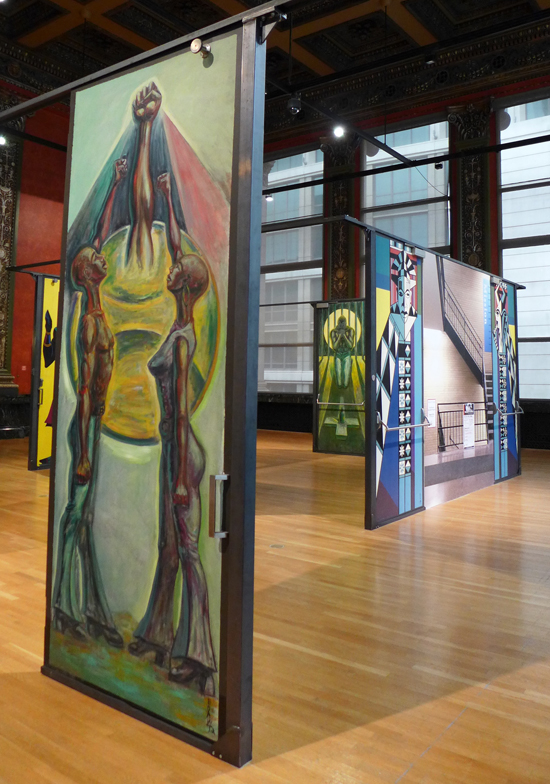 The next exhibit wasÂ 50×50 Invitational / The Subject is Chicago: People, Places, Possibilities, with artists from various Chicago Wards represented to make statements on the current state of the world, ranging from a postcard exhibit in which people wrote an artist about their wishes to statements about the current political climate.

Then I wandered on toÂ The Wall of Respect: Vestiges, Shards and the Legacy of Black Power, where Eugene Eda was mentioned again. The history of this particular wall spoke of the difference in opinion even among a group that society at large tends to homogenize, and was educational in so many ways.

The activism on making voices heard about cultures and groups that have been oppressed, suppressed and ignored is important, and while it takes effort to gain understanding, it is vital to deal with the discomfort of historic inaccuracy and workÂ to rectify it. 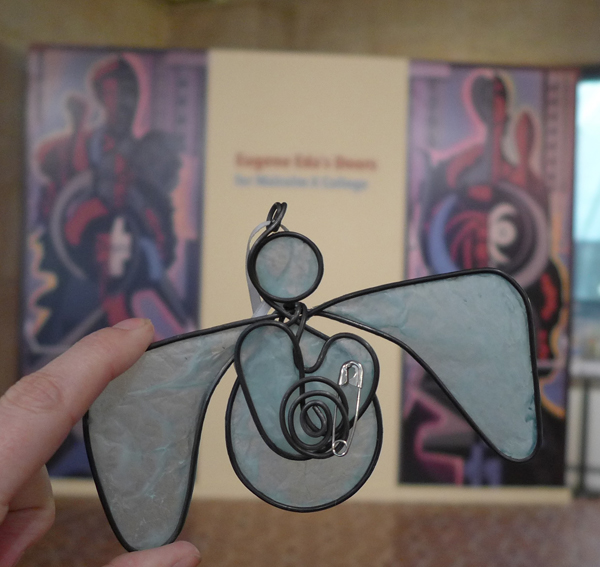 I wandered through a corridor that landed me in the ramp, where PassageÂ by SO-IL fromÂ New York City, U.S., featuring photography by Iwan BaanÂ from Amsterdam, The Netherlands is an ongoing exhibit. 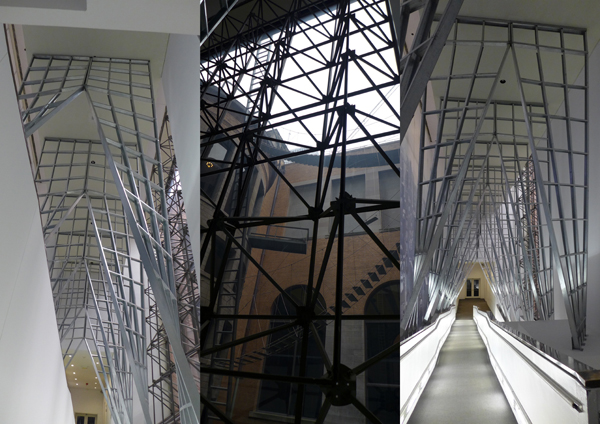 From that window I also got a good view of theÂ Piranesi Circus (Atelier Bow-Wow inÂ Tokyo, Japan) in the Atrium, which intrigued me on all levels of the cultural center. Both these architectural masterpieces were part of the inaugural Chicago Architecture Biennial,Â a global exhibition of contemporary architecture, showcasing the visionary ideas of 100 architects and designers from 30 countries. 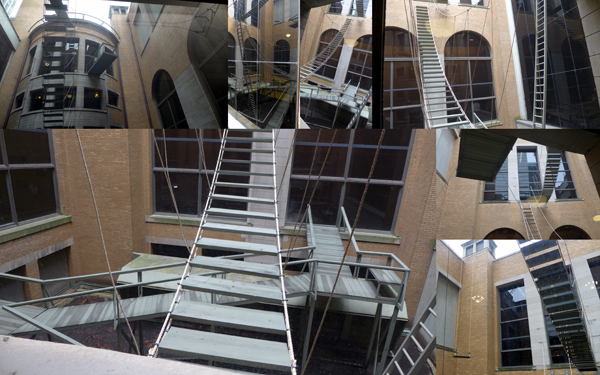 It is certainly a playground for the imagination. 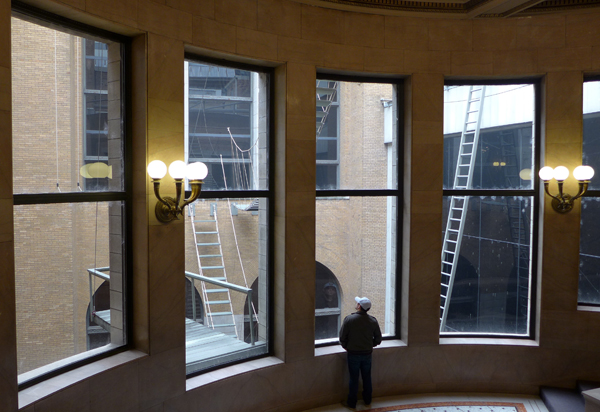 Of course the internal architecture of the Cultural Center is a feast for the eyes as well. 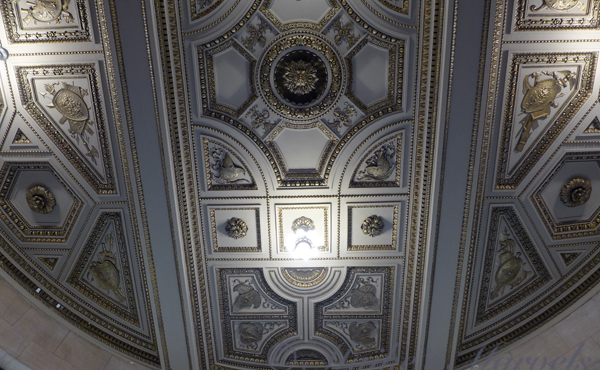 With its original intent as Chicagoâ€™s first central public library in 1879, the building was designed to impress with rare imported marbles, polished brass, fine hardwoods, and mosaics. 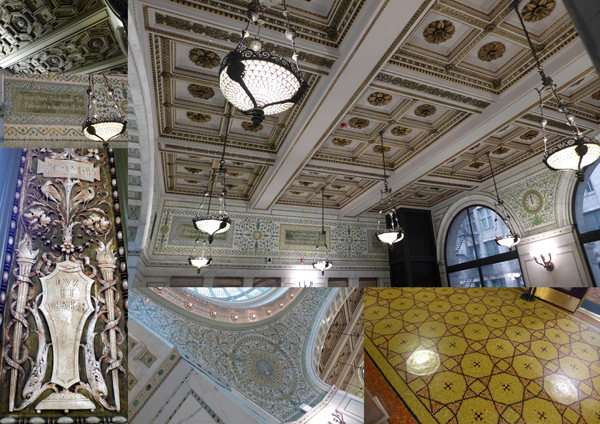 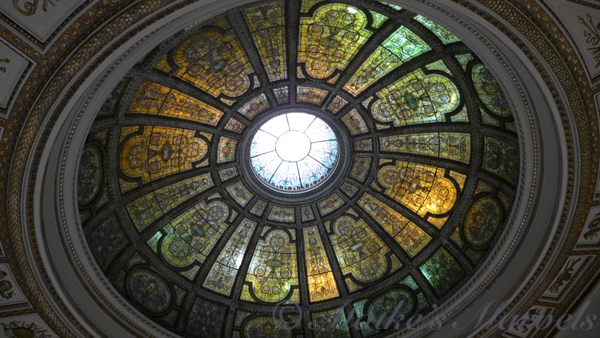 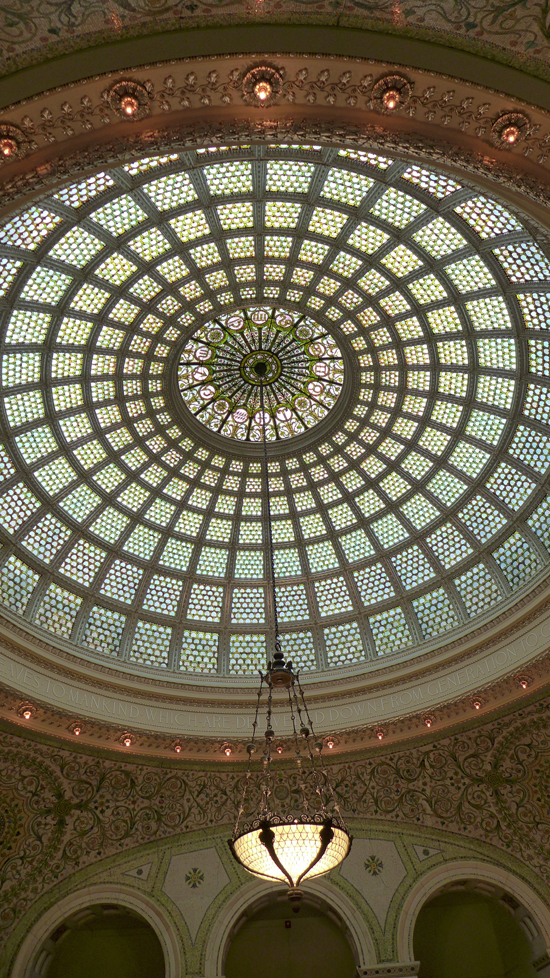 The workmanship is mesmerizing. You can learn more about theÂ Chicago Cultural Center exhibits on this link. 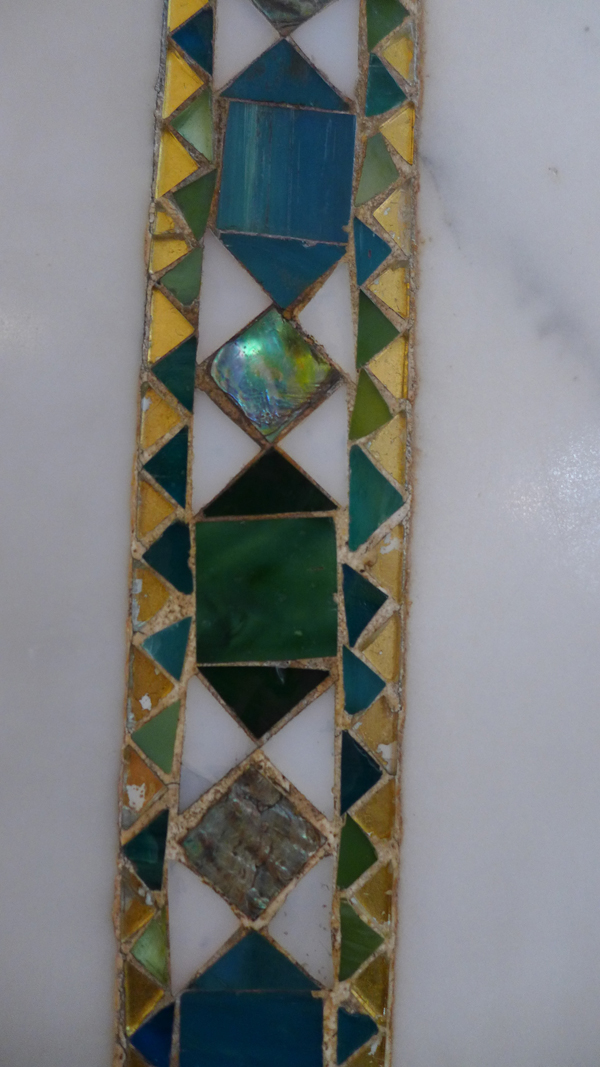 I also came upon lovely quilts like this one by Laverne Brackens.

These quilts are held in library collections and loaned out for display afterÂ their cleaning before being placed in their conservatorship’s collections again. 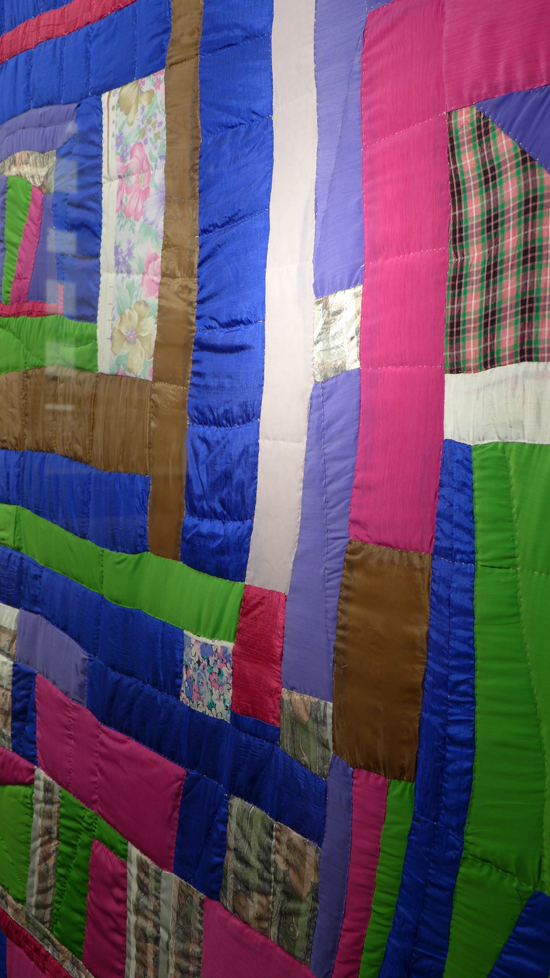 With so much history and creativity to ponder, I left the Cultural Center to make my way home. 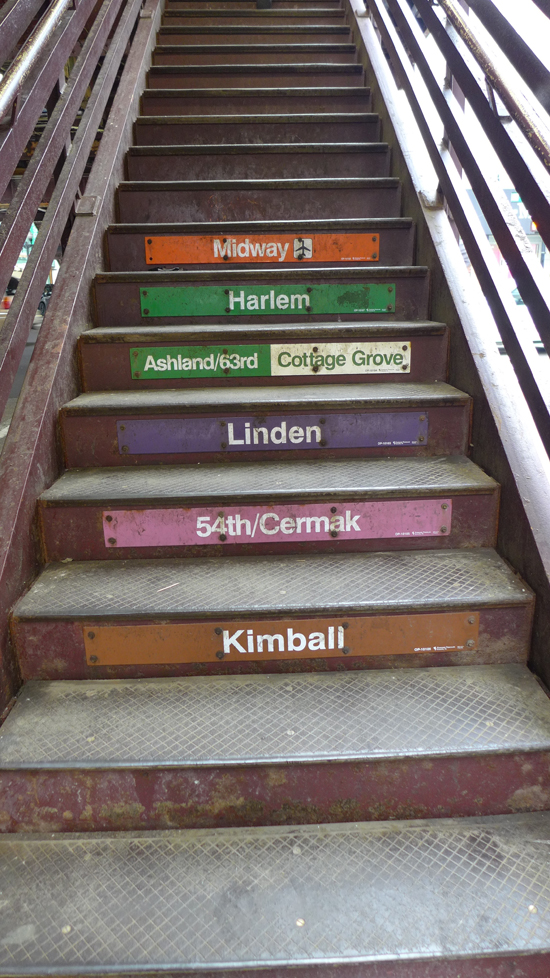 Chicago is such a diverse and vibrant city, and I strive to be more alert to the expression of voices that may not reflect my experience or point of view, but require me to get through some cognitive dissonance to grow as a human being and be a more compassionate citizen of the world.