Last summer I made a dragonfly stake on a whim and it was well-received. This year I took the production level up a notch and added ladybug stakes to the collection. I distributed them at my various boutique outlets, and they steadily fly off to new homes. A post on Facebook prompted Ayla’s Originals to coordinate a trunk show with me.

So for Aylaâ€™s Trunk Show this coming weekend, August 12 and 13, I am replenishing the batch. The traditional ladybugs go fastest, so red was on the brain this week. 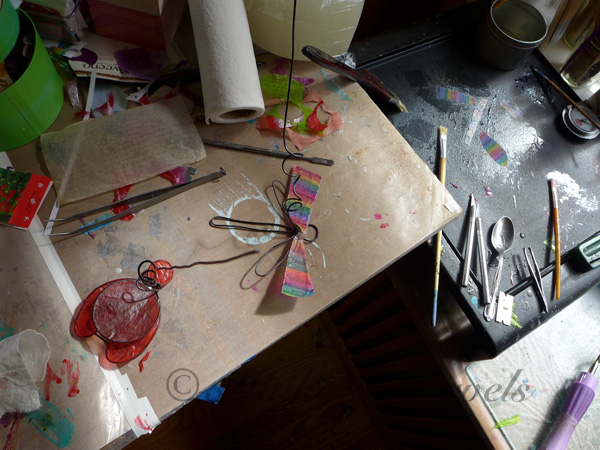 Meanwhile, the jig I had set up for the Morpho application needed to be dismantled. However, I was inspired to create a stake form that setup before making the change. 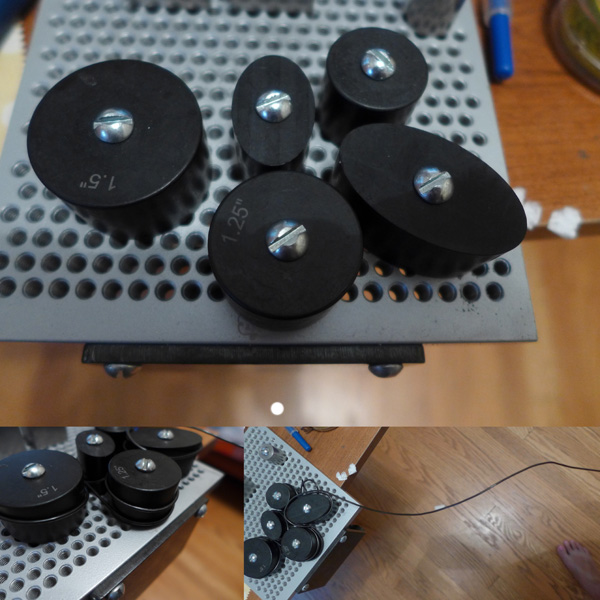 I had also just made two mini-books, and that book setup led me to make two bookish stakes.

Then I changed the jig to my custom-created dragonfly template, and started bending wire into the popular dragonfly stakes.Â When my fingertips were sore I closed the studio for the evening. 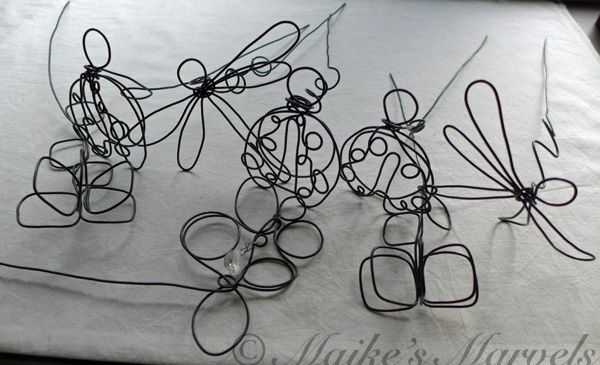 The next morning I fired up the griddle and my irons, and started laying out the outfits for each critter. I hand-stamped lime green paper and interfacing fabric to reflect the writings of a book. Then I painstakingly added each page, which takes a lot of aligning, adjusting, cutting and realigning. 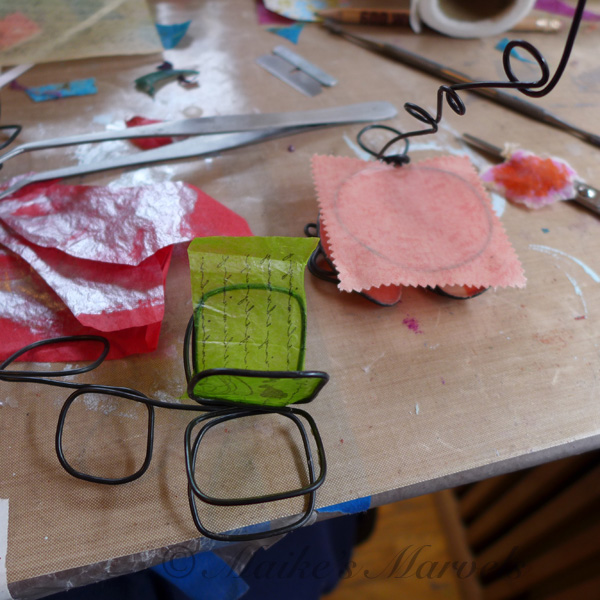 The books are my most time-consuming piece at this stage, followed by the dragonflies and their waxing intricacies. 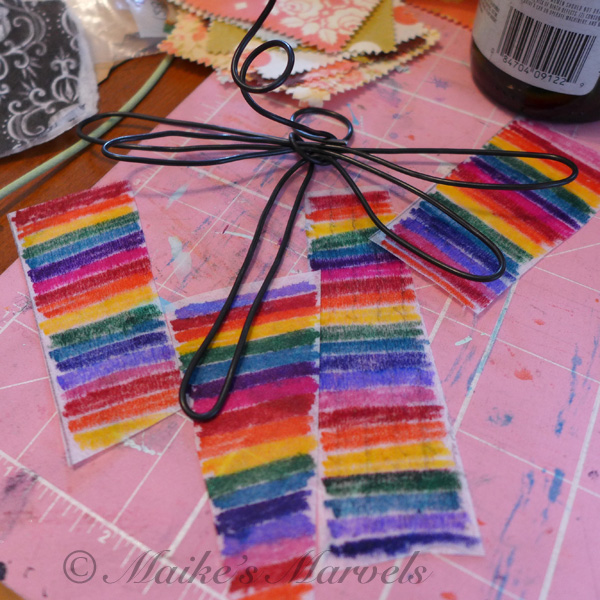 I hand-colored interfacing with rainbow stripes (in permanent marker) for the ever-popular rainbow dragonfly. 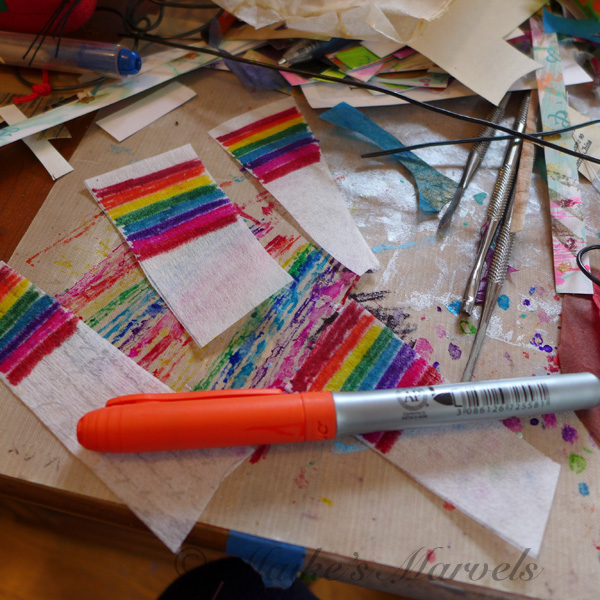 One ladybug was begging for polka-dotted fabric, and the other two were given red tissue paper. 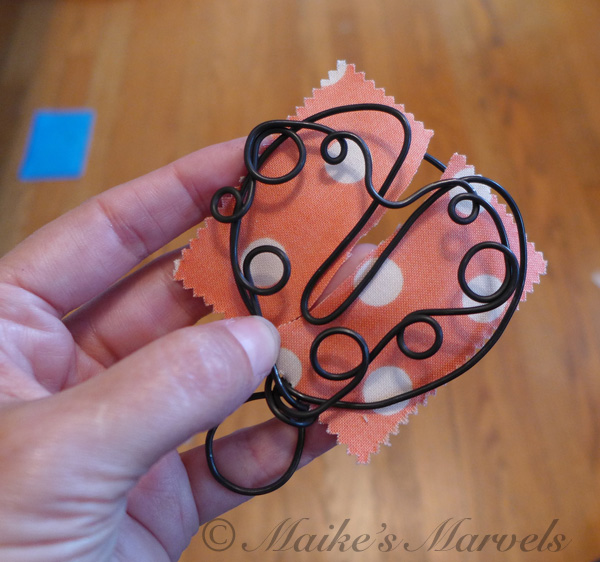 Storm clouds were brewing, so I also used that tissue paper and another fabric scrap for a test ladybug ornament, which I swiftly hung outside. 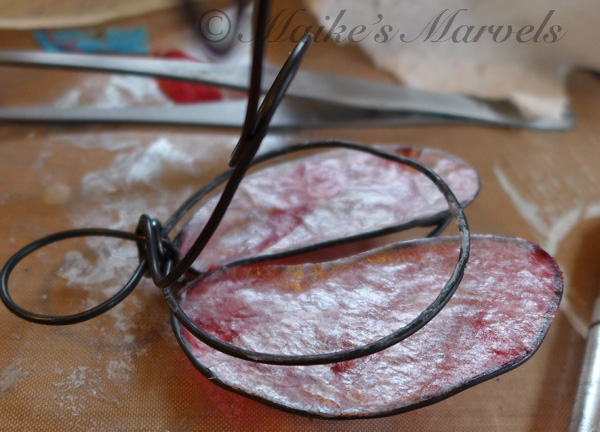 Soon the buckets came down and even splattered onto the deck. 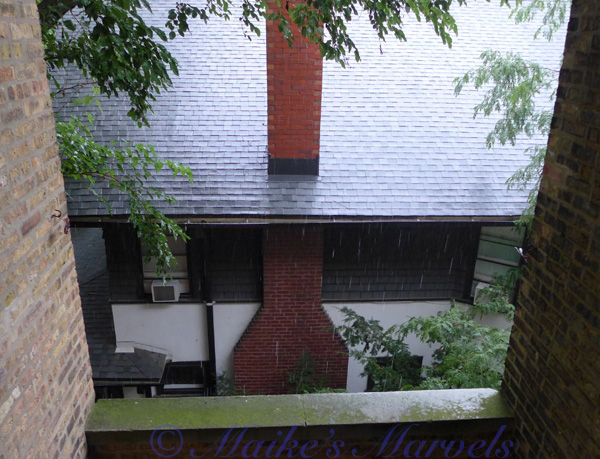 Nonetheless, I stepped out in the rain to see how my own two creatures were faring. Rain wasÂ bouncing off the dragonfly. Â The ladybug was shielded from the onslaught, but soon the angle changed and it too started getting wet. 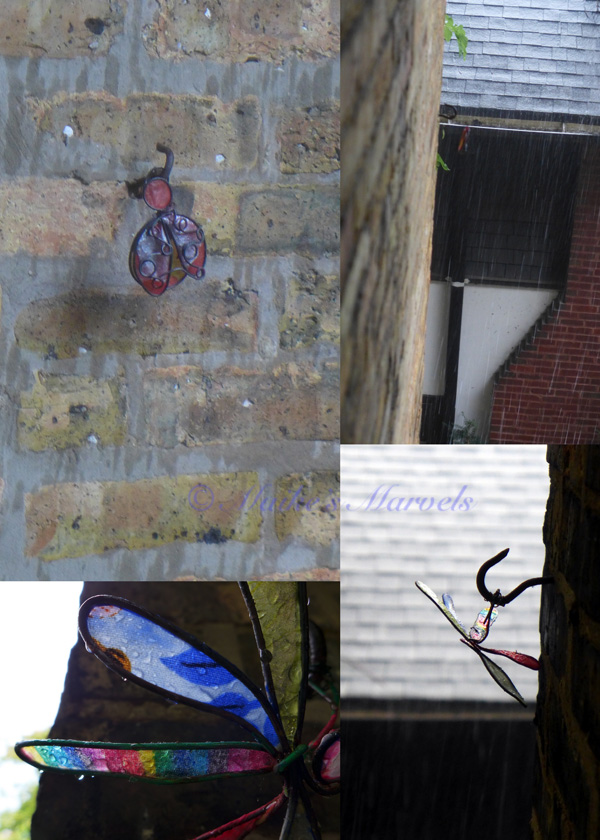 After the storm, both ornaments were wet, but undamaged. 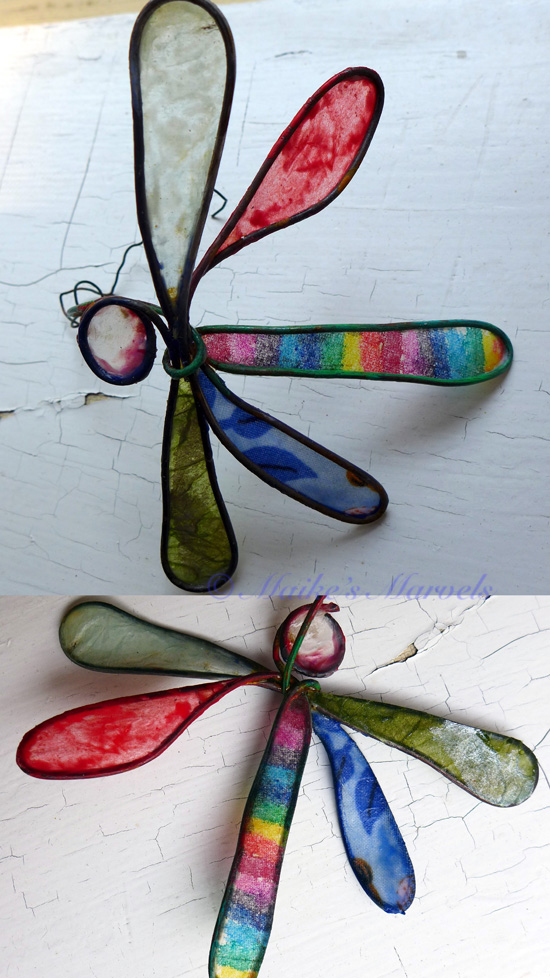 Upon closer inspection you can see spots of rust in the dragonfly, which has accumulated since I hung it in April. 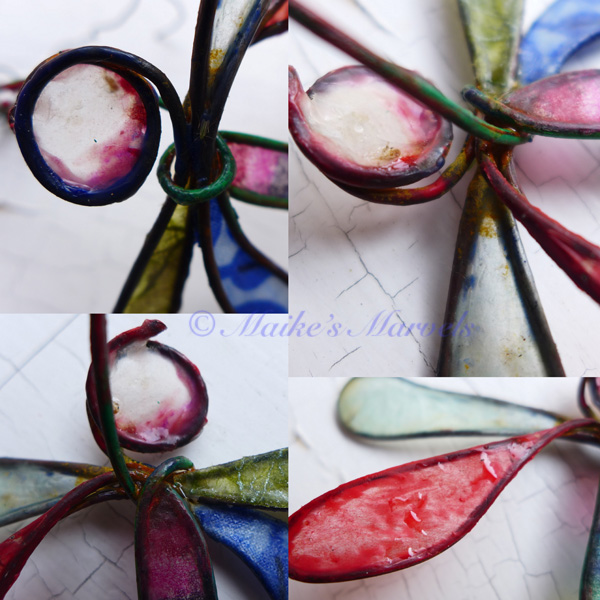 But overall the droplets just hang out on the wax until they evaporate, and the fabric and tissue strips remain intact.

I waxed my new creations. The whimsical oval piece was fun to design. 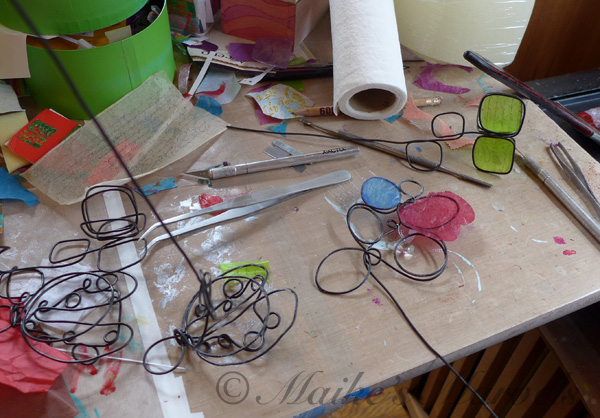 Then I photographed them as the light and angle allowed. 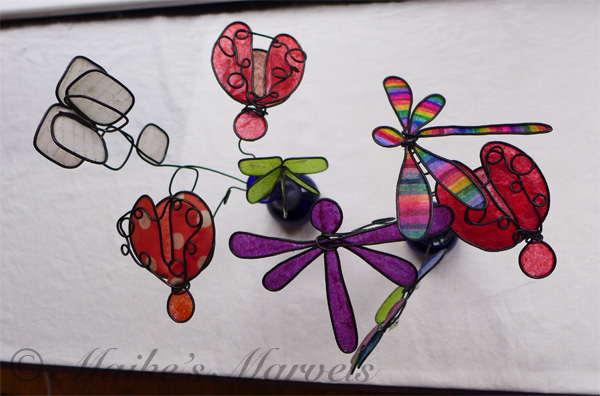 Stakes are harder to take pictures of than my other pieces. They don’t lay flat like regular ornaments, and getting all the angles in a photogenic way is challenging. 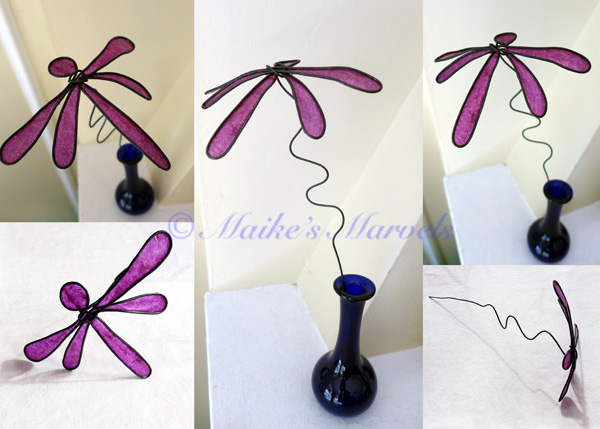 The Everlasting Fire Studio vases showcase each one well, though. 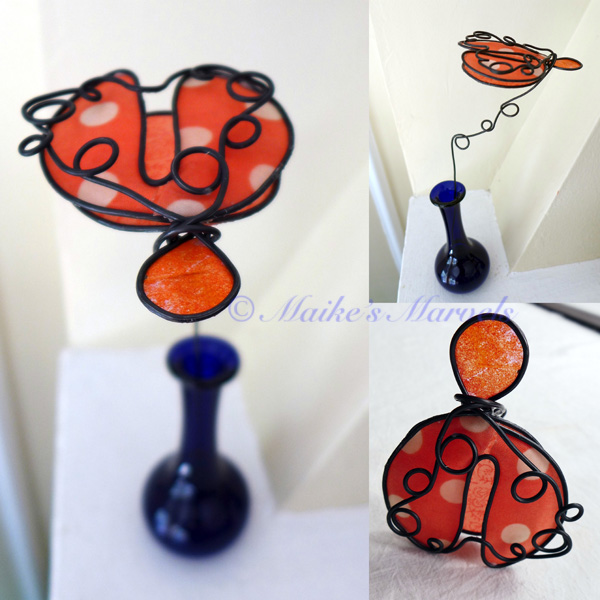 I really like the bookish ones, which will be a whole other outdoor test run. As ornaments, these books are more fragile than my other pieces. So for now I’d recommend them indoors only. 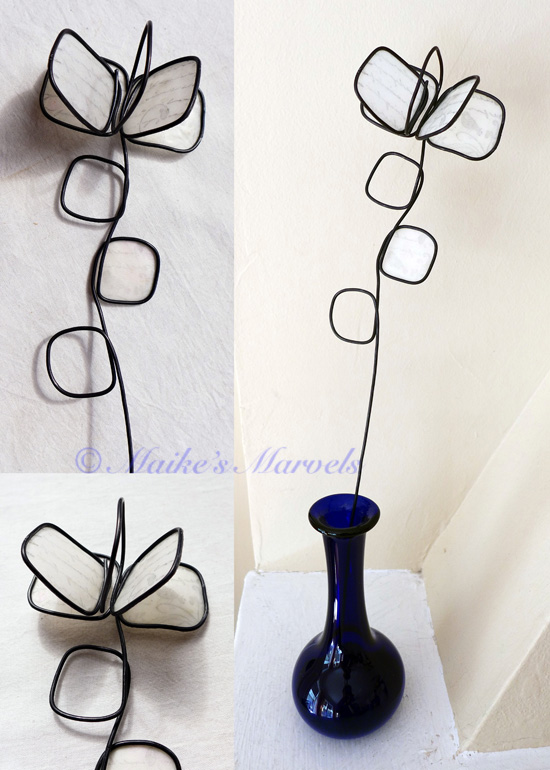 Good thing I have a volunteer with an outdoor plant I can send one of these off to.

My fireplace mantel is also a bit crowded, so I played with one corner for now, which isn’t ideal. 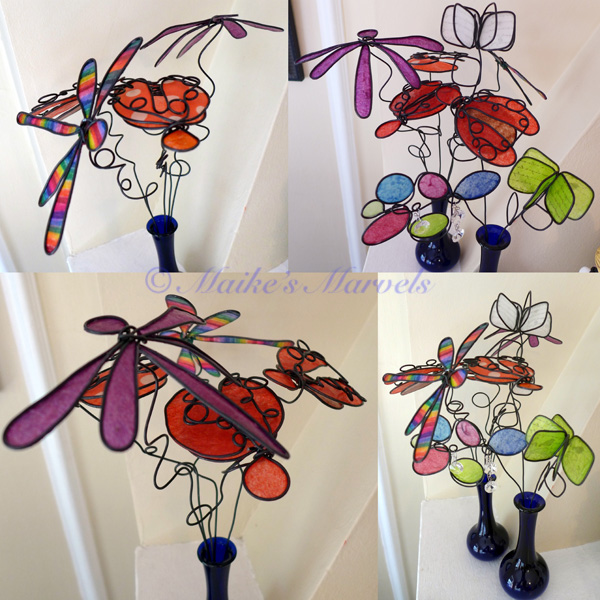 I will need to work on a light box setup to block out the windowsill. 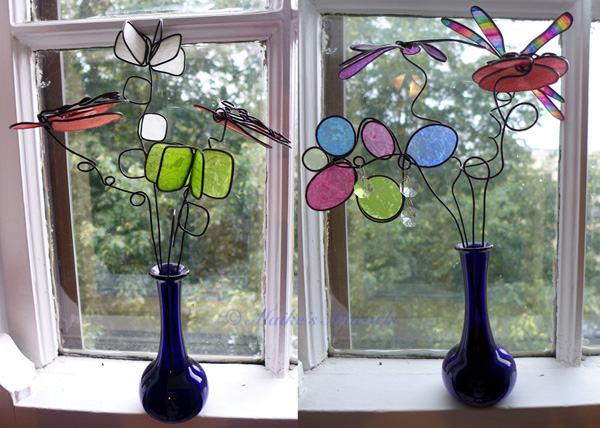 Meanwhile, they look pretty as a bouquet and by themselves, and make me happy. 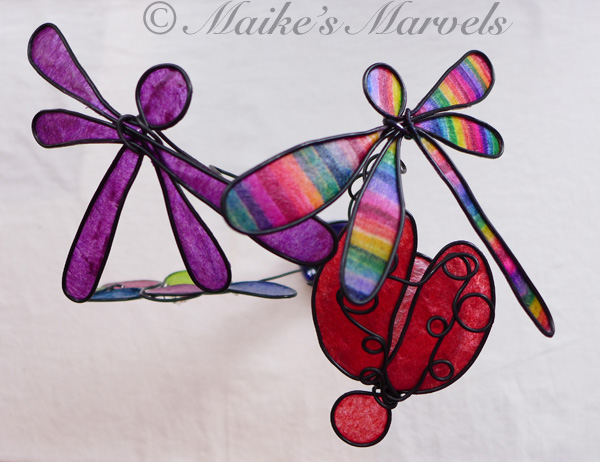 Since I will be showing at a bead store next, I also wanted to play with some bling on a stake. 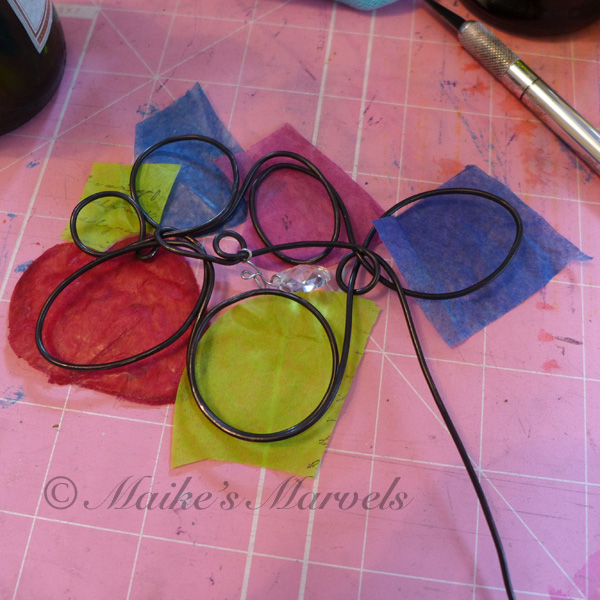 The organic creation received 3 led crystals, which I know will hold up outside. 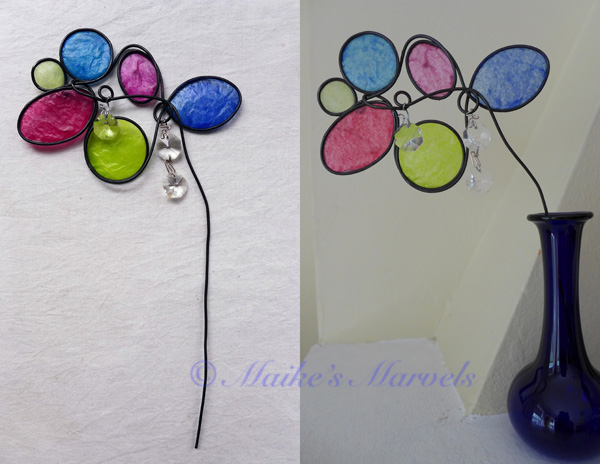 I plan on asking Ayla what else is suitable for outdoor sun catchers when I set up my trunk show this weekend. 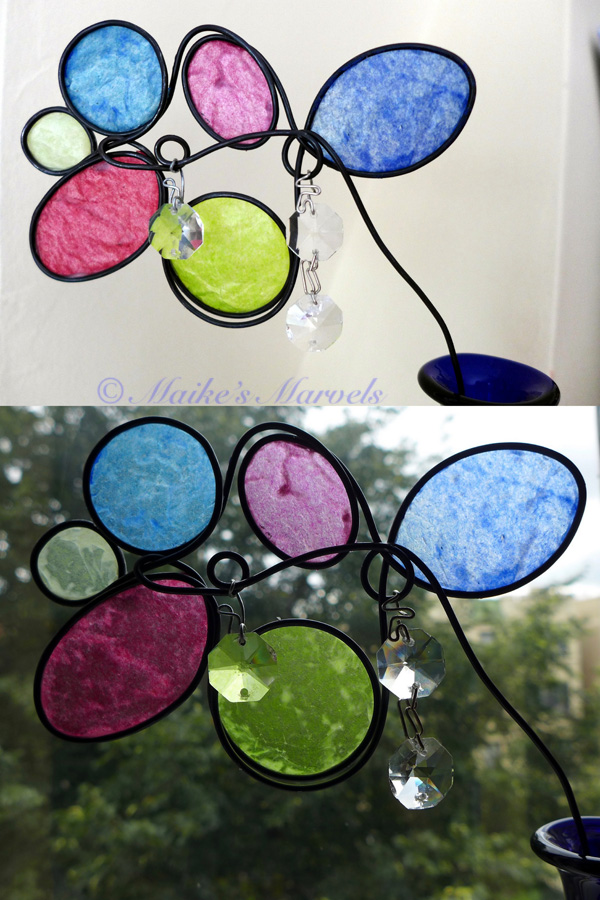 The new creations will have their own table at the Aylaâ€™s Originals Trunk show. I will also bring my jewelryÂ and angels of course.Â 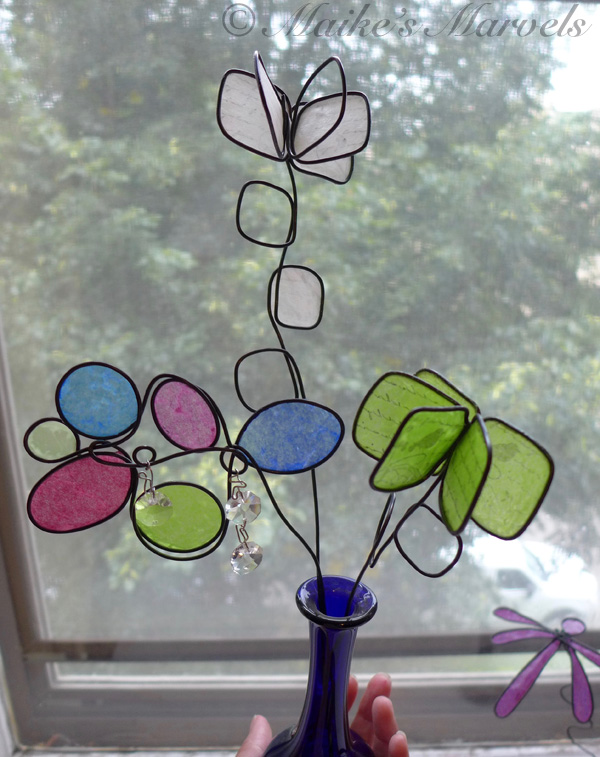 Aylaâ€™s Originals Store is located at 1511 Sherman Avenue in Evanston. I will be there Saturday from 10 am to 5 pm and Sunday from 12 to 5 pm. Then all unsold pieces go home with me again. 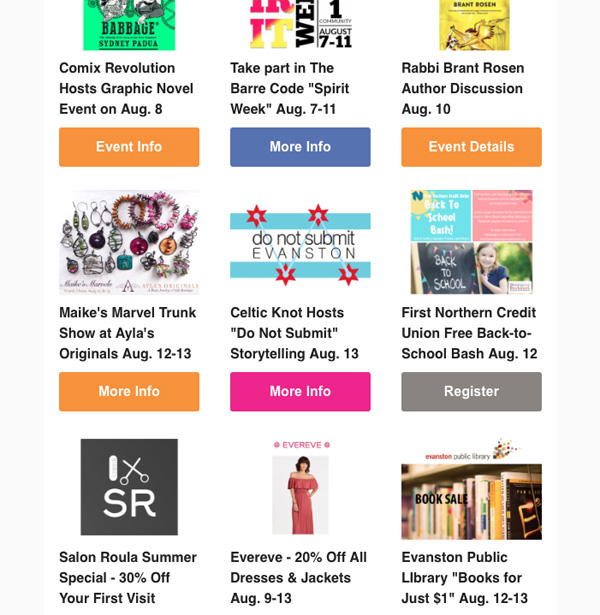 There are lots of fun shops and eateries around 1511 Sherman. Be sure to take a selfie with Wonder Woman at the Other Brother Coffeehouse! 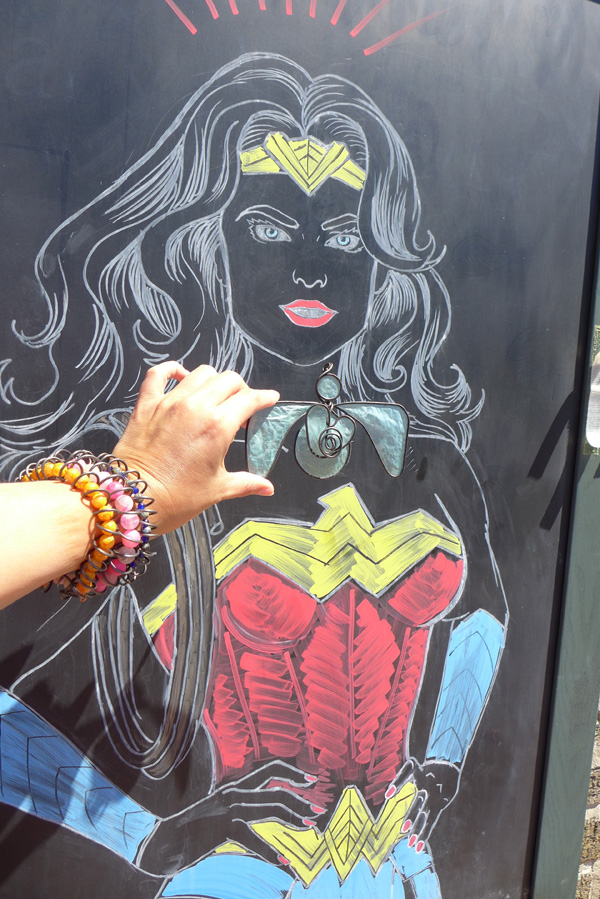