â€œThere is no royal flower-strewn path to success.
And if there is, I have not found it
for if I have accomplished anything in life
it is because I have been willing to work hard.â€
~Madam C.J. WalkerÂ

Itâ€™s Black History Month in honor of which the Womenâ€™s Innovation Network will be hosting a panel discussion this Tuesday, February 21, 6 pm at International House, 1414 E. 59th St, on the University of Chicago campus. It promises to be an evening full of inspiration and empowerment. There is still time to reserve a spot viaÂ www.ladiesofwin.org.

The title of the event is: â€œSuper Successful Black Women Entrepreneurs Share How They Did It â€“ the Story Behind the Glory!â€

â€œNow all we need is to continue to speak the truth fearlessly,
and we shall add to our number
those who will turn the scale to the side
of equal and full justice in all things.â€
~ Lucy StoneÂ

More information on the event from the WIN press release:

â€œModerated by NBC TV Reporter LeeAnn Trotter, … attendees will hear success stories from an inspiring panel at this exciting event.

“With this powerful event,” said Valerie Beck, president of the Women’s Innovation Network (WIN), and founder of Chicago Chocolate Tours, “we are filling an important need for education and connection, and making it fun in the process. Get ready for massive inspiration, as our panelists share the story behind the glory!”

Moderator LeeAnn Trotter is NBC’s entertainment reporter, covering everything from restaurants to celebrities to what’s happening around town. This Chicago native joined NBC in December 2005, after working at CLTV for eight years. There, she anchored the weekend news and hosted the award winning entertainment show, “Metromix: The TV Show,” which earned her a local Emmy and several nominations for Best On Camera Performance. 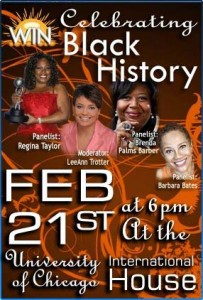 Since becoming the North Lawndale Employment Networkâ€™s (NLEN) founding Executive Director in 1999, Panelist Brenda Palms Barber has grown the organization from two to 14 employees and has generated an annual budget of $1.9 million. A wholly owned subsidiary of NLEN, Sweet Beginnings is a transitional jobs program that provides green collar jobs to formerly incarcerated individuals, producing honey in an urban neighborhood setting, and manufacturing and marketing honey-based personal care products under the beelineÂ® label throughout the Midwest region. Whole Foods Markets and other high-end specialty boutiques like Mark Shale are important partners and distributors of beeline products.

A contestant on NBC’s Fashion Star, which airs next month, Panelist Barbara Bates has been a designer for 25 years. Barbara’s heart and dedication to the community is as large as her designing talent. In 1999, Barbara established the Bates Foundation which donates prom gowns and tuxedos to the neediest high school students in Chicago. Barbara is also a cancer survivor who never misses an opportunity to advocate for testing to aid early detection.

The WIN Black History Month Innovation Panel will be catered by Loquacious Catering, a WIN Member. Tickets to the event are free of charge, though contributions for food and beverage may be made at $10, $15, or $25, and spots may be reserved at www.ladiesofwin.org.

An energetic and new-thinking organization, the mission of Womenâ€™s Innovation Network (WIN) is to foster massive business growth for women entrepreneurs through innovation, inclusion, and inspiration, in a positive and ethical environment.”

â€œI think, with never-ending gratitude,
that the young women of today do not and can never know
at what price their right to free speech and to
speak at all in public has been earned.â€
~ Lucy Stone

Â ADDENDUM: As of March 10, 2013, I no longer support the WIN Board and its actions. However, I do support small business, women-owned businesses, and the gracious hosts of past WIN events.