â€œPeople wonâ€™t remember your accomplishments,
theyâ€™ll remember how you made them feel.â€
~ Melissa Joy Kong

After an information-packed morning at Think.Start.Do, the learning continued after lunch. With our mind on food, Johanna Cook of MommaCuisine proudly showed the video that is now on view as United Airlinesâ€™ in-flight entertainment.

Johanna started out in culinary school but didnâ€™t enjoy it, so she studied journalism instead to write about the restaurant industry. Soon she became a hostess at California Pizza Kitchen and loved working in a restaurant. She made working in restaurants her career, had three children and then plateauâ€™d a bit in life. â€œMy realistic dream wasnâ€™t working out.â€ 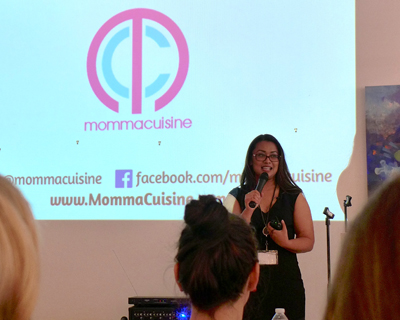 In 2007, a friend mentioned that she should blog. She started blogging recipes, and one day received a comment from an excited reader who had tried her recipe. Her first reaction was fear: â€œWhat if someone got sick from my recipe?â€

â€œI kept writing just to write.
Then I started to research how brands were using social media.
I didnâ€™t know anyone and no one knew me.
But I thought if Martha [Stewart] can do it so can I.â€
~ Johanna Cook

She started thinking about her blog as a business and developed a business plan. Through a ROKU channel and developing her brand he business is valued at $.5 million and she made 6 figures last year, without having millions of followers. 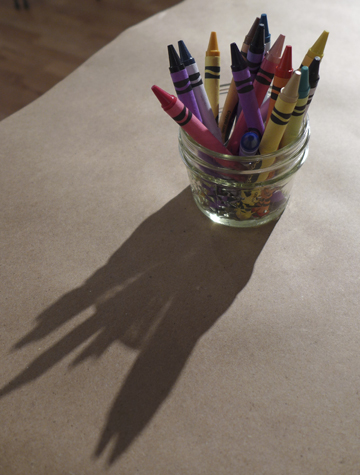 Johanna recommends making a list of 20 words that you want your brand to be. Then pare that list down to 10, and the pare it down to 4-5 words and focus on those as your brand. â€œFood is the vehicle to help other women with their passion,â€ Johanna said about MommaCuisine.

â€œEveryone here can make 6 figures on a web site,
even if it is just a side muscle.â€
~ Johanna Cook

Melissa Joy Kong, owner of Iceberg Content Marketing Agency gave advice on getting out of the weeds of business management and getting beck to the reason you started your business in the first place. She asks herself a few key questions: 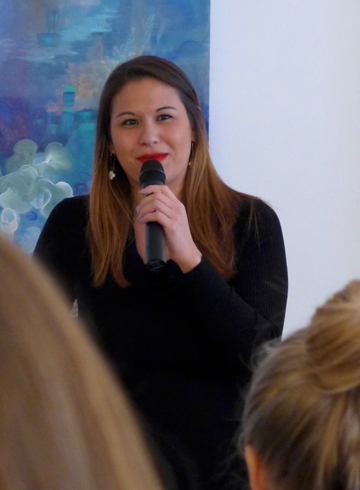 1. What am I doing with my life?
Melissaâ€™s career is one of seeking, traveling the nation to interview couples about love for her Lovumentary, being part of various startups, and helping men transition out of the NFL. The revelation came that instead of seeking an answer externally, she realized she already had the answer inside herself. She realized she was a born storyteller, and she should help others tell their stories. To ease the searching, she recommends writing a letter to your current self from the perspective of 30 years from now. 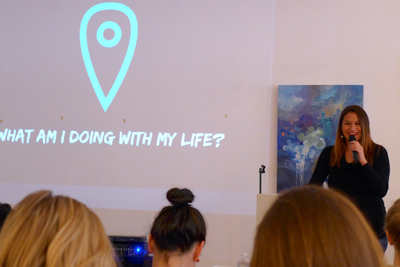 2. How do I make the best use of my time?
Melissa has an extensive vision board with sticky notes to map out her time. She guarded against falling into an Internet black hole and use that time more constructively. Instead of focusing too hard on your end goals, Melissa recommended focusing on habits: â€œWe become what we repeatedly do.â€ She recommended adding a new habit each month, and giving yourself 66 days to form it rather than the proverbial 28. 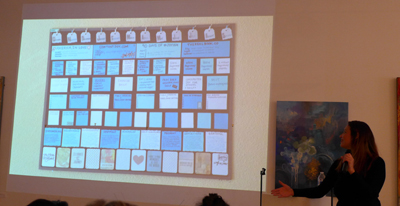 A side benefit of creating habits is that you will also stop negative self-talk with yourself. As you become proud of your incremental habit accomplishments, your inner voice will trust itself more and focus more on your true passion than the lies you tell yourself.

â€œEven though we focus on money or titles,
there is nothing more valuable than time.
You canâ€™t get time back.â€
~ Melissa Joy Kong

3. Can I make a difference?
A blog post Melissa wrote in 2012 got a comment from a reader about how one particular quote changed her life, and Melissa needed to read that quote she wrote herself at that point in time. She stressed telling the people who make a difference in your life regularly, because it will help affirm their purpose too. 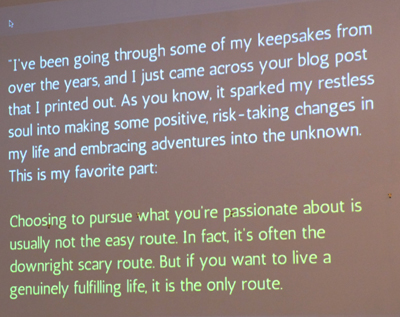 To accomplish your goals, she said to write out everything you want to do in 3 years, and then crossing off all but one priority. Then set out to do that one thing by mapping out baby steps.

â€œWe get so caught up in our business
that we forget that itâ€™s about one another. …
In the end, we are all walking each other home.â€
~ Melissa Joy Kong

Simon Anquetil, Chairman of business incubator Tech Pilot Fund (which sponsored our VIP Happy Hour) met Think.Start.Do Organizer Stefanie Monge through South by Southwest. He decided to get an MBA without having an undergraduate degree, and succeeded at being accepted at a university that had its first inaugural entrepreneurship program.

After founding an IT consulting business and also working as a medical consultant Simon realized repeat business came from women business owners, and he began to study the difference between male and female entrepreneurship. Simon stressed that he understands that gender is fluid, but that there are traits that are classified as more male than female, but that individual gender dispositions are based more on psychological patterns through nurture. 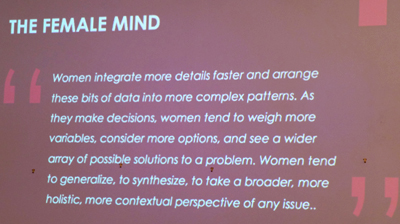 The key traits that Simon said distinguish entrepreneurial approaches are:
1. Web Thinking: Men tend to think in a linear step-by-step approach whereas women engage in web thinking, considering the context of each scenario.
2. Ambiguity: women handle ambiguity better than men.
3. Chunking, the process of teaching the brain a new pattern and getting it right at any speed is accomplished more easily by women.
4. Long-term Thinking: Women tend to think more longer term than men.
5. Empathy: Women are more community oriented when making decisions rather than focusing on power and status.

While there is much buzz about the NUMBER of women in business leadership positions, Simon pointed out the relative percentage of women business owners and CEOs is still at a historic 4 to 5%. There is still a gap in college enrollment of 60% male to 40% female, and women are still not earning more with their degrees. Men tend to invest angel funding in men rather than women. 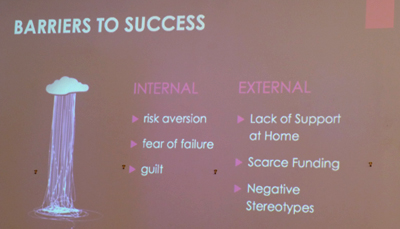 Simon then joined a panel about Embracing Failure & Setbacks with Angie Lee, business strategist; Saya Hillman, Founder Mac & Cheese Productions, andÂ Terri Brax, CEO & Co-Founder of Women Tech Founders. The panel agreed that failure is a matter of perspective, and stopping after a setback is worse than not moving on at all. Each also cited examples of how a perceived failure, such as a layoff, turned out to be the catalyst to a better life, even if it seemed the end of the world at the time. 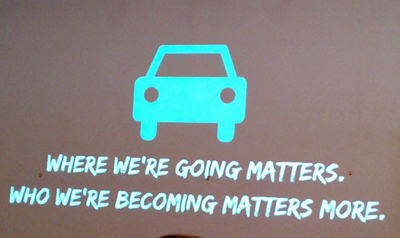 Aubrey Schuster of TransTech Social Enterprises shared her journey from being the anointed heir to a successful family business and doubling its sales to coming out and losing both her career and her family. She had to move away to be true to herself. When she moved to Chicago she was introduced to Angelica Ross and followed her on social media. When Angelica made a comment about needing administrative help, Aubrey raised her hand via social media, and was hired.

â€œThere is an entire group of people with conviction.
Make a place in leadership for trans people.â€
~ Aubrey Shuster

TransTech Social Enterprises was formed in 2014 as incubator for LGBTQ Talent with a focus on economically empowering transgender people in the community. TransTech membersÂ are trained in graphic design, web development, social media management, multimedia production, and other services through real-life projects. 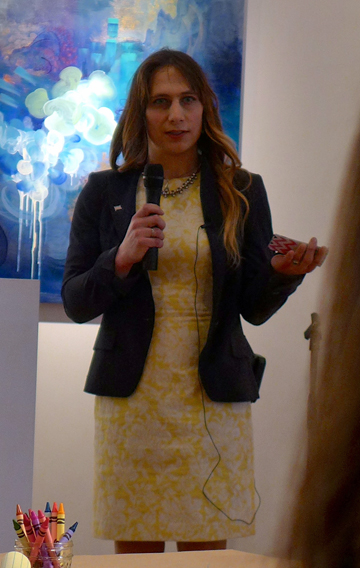 The technology field is suited for transgender people because it can be done remotely, removing the barriers of engaging in a hostile office working environment. Since TransTech is a training ground, services are discounted in exchange for investments in social justice causes.

“Transwomen are not a homogenized group of people.”
~ Aubrey Shuster

Because transwomen reject masculinity, they are more targeted than those impacted by general misogyny. Trans women, particularly black transwomen, are marginalized with significant economical barriers. They are often rejected by family. 47% of black transwomen are incarcerated. 90% of transgender people hide their true selves, and 70% do not come out at work. You can learn more via this video clip.

â€œThis is the most diverse conference I have been to.
Everyone has spoken beautiful truths.â€
~ Devorah Heitner

Devorah Heitner, author of Raising Digital Natives thought a career in academia would be a perfect fit since her professors seemed to have a lot of autonomy, and she didnâ€™t want a boss. She learned otherwise as she pursued this path, but nonetheless focused on pursuing her PhD in 2007. From 2002 to 2007 she researched Black Power TV, traveling the country interviewing people who were part of this movement after Martin Luther King was assassinated. She got married and had a child, and then learned that her husband did not want to leave Chicago, limiting her job options. She took a job that was a bad fit, and made it last for several years until she was fired.

“I was thrust into entrepreneurship
because I knew I cannot be an employee again.”
~ Devorah Heitner

After being fired, she called a career coach friend, and was at the crossroads between continuing a track of race, social justice and media, or exploring kids and digital media. Economic factors had her giving talks at local middle schools and high schools about digital media. She researched the challenges parents and teens face regarding cell phones, permissions to post photographs and other topics. By speaking, blogging and sharing data, she compiled Raising Digital Natives. 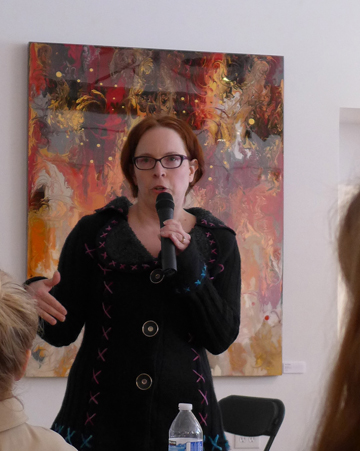 In 2014 she gave a TEDx talk that caught the attention of Singaporeâ€™s Minister of Education and she was flown out to Singapore to speak in March. She now has a team of 4 people assisting her with a new book coming out and continuing her venture.

Tips Devorah thinks are applicable to entrepreneurship from her research are:
1. Mentoring over Monitoring: taking a cell phone away after a mistake does not teach children anything, but teaching how to manage content is more effective.
2. Find productive ways to deal with failure: digital citizenship is an ongoing process and a constant learning curve
3. Find clarity through boundaries: unplug on a given days to clear your mind, donâ€™t discount your rates when you know your value
4. Be clear in your subject lines when requesting an audience: Rather than â€œrequesting meetingâ€ capture what you do, such as â€œdigital media expertâ€ when reaching out to new leads.

â€œWe all have a passion and
we all want to make money with our passion.
Money gives us access and more freedom.
Money helps you do more.â€
~ Johanna Cook

We left with notebooks full of helpful hints, inspiration and exercises to ponder, and book titles to read. Many of us felt affirmed in making life choices that have been simmering, and others felt supported in staying the course of where they are now. 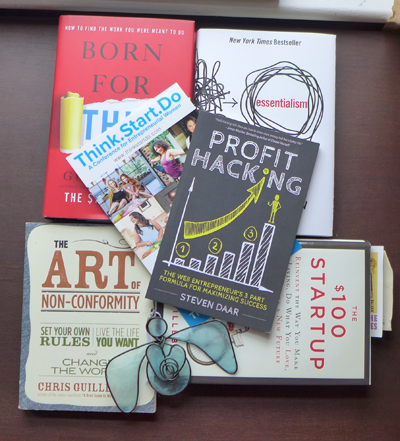 It will be exciting to see how our online community develops after the conference, and where we will all be when the next Think.Start.Do conference comes around.