“O, wonder!
How many goodly creatures are there here!
How beauteous mankind is! O brave new world,
That has such people in it!”
~ Miranda in Shakespeare’s The Tempest 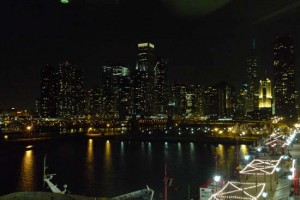 Last week I saw a fabulous interpretation of Shakespeare’s Tempest at the Shakespeare Theater. My friend had alerted me to this now sold out show early on. I’ve had a fascination with puppets since watching Germany’s Augsburger Puppenkiste on TV as a child, and still enjoy puppet shows whether for younger or older audiences. Watching 3 actors take on 6 adult puppet personas in The Feast: an intimate Tempest was captivating.

The play was a bit dark, so it was nice to come out to the shining Ferris wheel of Navy Pier, a tribute to the first Ferris wheel built for the 1893 Chicago World’s Fair. 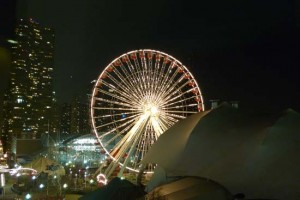 Little did I know that Navy Pier also holds the Smith Museum of Stained Glass Windows. Having just read Susan Vreeland’s Clara and Mr. Tiffany, I was mesmerized by these beautiful collages of glass. 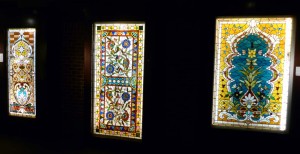 Both the book and the exhibit emphasize how these windows intended to showcase Chicago’s cutting-edge design and America’s independence in developing artistic styles.

This window is quite abstract. 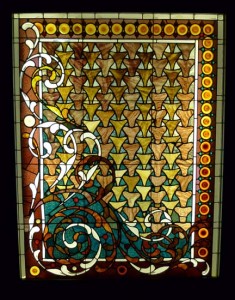 This “statement of early American feminism” was placed in the Women’s Building during the 1893 World’s Fair. It represents “Liberty for all women; Enlightenment for the oppressors; and the Progress made when this is accomplished.”

This German window was based on a poem by Johann Wolfgang von Goethe. 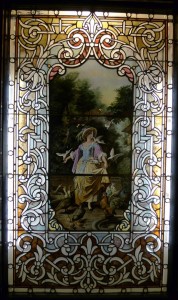 I like that it has butterflies and bunnies in it. 🙂 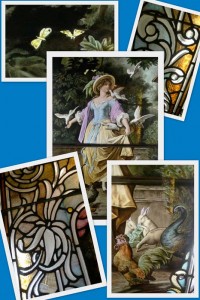 The Art Nouveau style became prevalent in windows too. 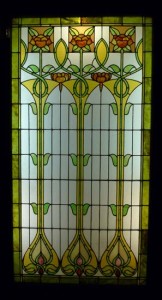 These Four Seasons lived at a North Sheridan Road residence, and are based on a design by Alphonse Mucha (who might have overseen this window’s fabrication). 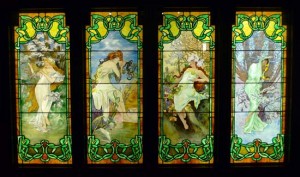 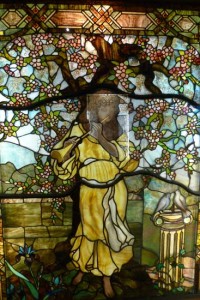 The chunks and orbs of jeweled glass made me wish for a window of my own. 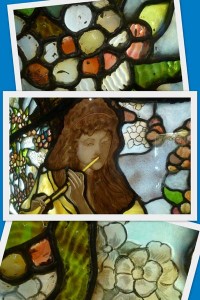 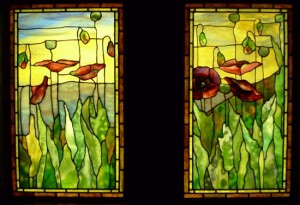 “For a depressingly long period, even his own furnace men
told Tiffany that his aim was unattainable.
It was impossible, they said, to incorporate color into glass
as he envisioned it.
For years they tried to combine various
metallic oxides to produce different tints and hues,
but the mixture would always disintegrate.
However, Tiffany had a stubborn streak which,
added to his extraordinary energy, led to eventual success.”
~ Dr. Egon Neustadt, the Lamps of Tiffany

This garden vignette looks Tiffany-esque, but is not traced back to the studio. 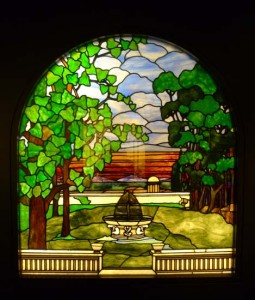 Agnes Northrop worked with Clara Driscoll, and designed this window for Tiffany Studios. It demonstrates Tiffany’s impressionist period and has Favrile glass in the sky.

“Most sheets of Tiffany glass are not smooth
but are unevenly surfaced either on one or both sides;
multitudes of folds, ripples or nodular irregularities give the glass
a third dimension and also create the extraordinary light refractions
which give Tiffany shades a great deal of their distinction.”
~ Dr. Egon Neustadt, the Lamps of Tiffany 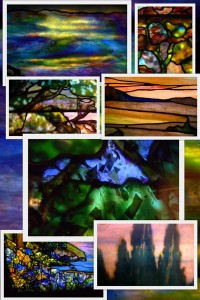 “This is a most majestic vision, and
Harmonious charmingly.”
~ Ferdinand in Shakespeare’s The Tempest

There is a whole section on religious windows, such as this Nativity. 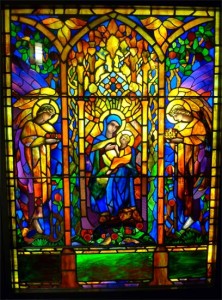 I pored over this Roundel with Three Angels. 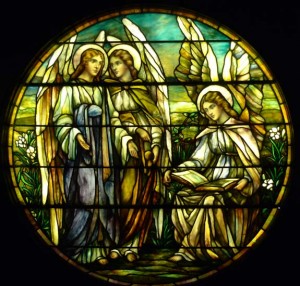 There is so much more to see, and gorgeous detail my camera couldn’t capture. I highly recommend taking a close-up look to see the glass-making techniques applied in the late 1800s and early 1900s.

“Thou makest me merry; I am full of pleasure:
Let us be jocund.”
~ Caliban in Shakespeare’s The Tempest 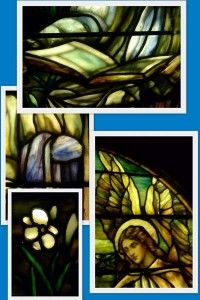