Princess Lasertron’s ninth Radvent post is about Advice. I am not always good at taking advice. It occurs to me now that I tend to confuse advice with direction and even criticism at times. Being told to do something doesn’t always work for me, unless I am inviting the instruction in. So I will let Princess Lasertron’s words sink in.

“I think that listening to what others
have to say is a way of doing ‘due diligence’ for your own choices
you either make sure you haven’t left any considerations out
or become even more emboldened in your decision.”
~ Princess Lasertron

When I started posting my Maravilgia pieces to my personal Facebook page in October, I did get some good feedback (hey, I like that word better!) including that some friends would like to see a Verses series of pendants. So I scoured the used bookstores for a Bible that had text in pendant-size columns. 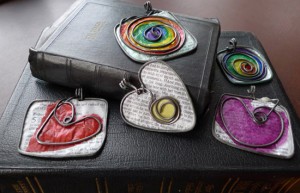 These second-hand Bibles are pretty tattered and well-used, and I don’t feel bad about tearing them up for a new purpose. 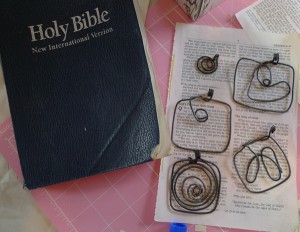 I measured out the column size in wire to try to fit in whole verses, but in some cases smaller is nicer, and just knowing that well-memorized verse is close to your heart will be sufficient. For Noah’s story, I colored a rainbow on tissue paper to go within the coil of the pendant. 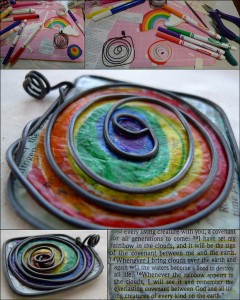 Esther’s crowning was a sign of Xerxes’ love for her, which had to be documented with a heart. 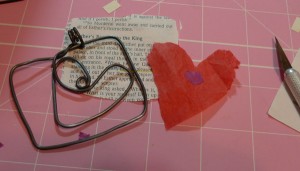 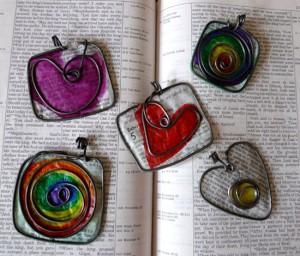 Let me know which shapes you like, and what part of the Bible inspires you most. Yes, I will be accepting your advice!

Since we’re on a sacred topic, The Sacred Show is closing on December 15. The reception is from 5 to 7 p.m. and will coincide with the Chicago Painters and Artists Meetup Holiday party. It will be Sassy Aphrodite‘s last public appearance, as two collectors will be drawing straws over where she gets to go next. 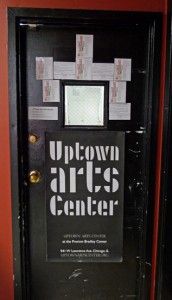 Princess Lasertron has some great prompts on her blog about giving and asking for advice. I do need to re-read my Knowledge post over the next year, because I do think that is some of my own best advice. I’ve also recorded many inspirational quotes over the past few years in designated quote books. Some find their way back in letters and on pendants, and as I re-read them and incorporate them into my art, I take that advice as well.

“Record whatever advice you would give a friend, sister, or daughter
about confidence, ambition, and self-love and read it to yourself.
Post that list where you can see it! Bathroom mirror status!
You wouldn’t have written it down if you didn’t believe it,
and you deserve as much self-respect as you
would give to any other girl or woman you love.”
~ Princess Lasertron

My advice to you? If you’re struggling with something, start drafting an e-mail about it or write a letter to someone you trust. I have found many times that I didn’t need to send that letter, and even when I did, the dialogue gave me so much more insight and helped me decide just by putting it in writing. Journaling and blogging have the same effect.

What advice do you have?

“The lessons people share
say a lot about where they’ve come from.”
~ Princess Lasertron