After immersing myself in Chapter 1 of Alice in Wonderland, I was eager to see the Alice ambulatory play by Upended Productions. 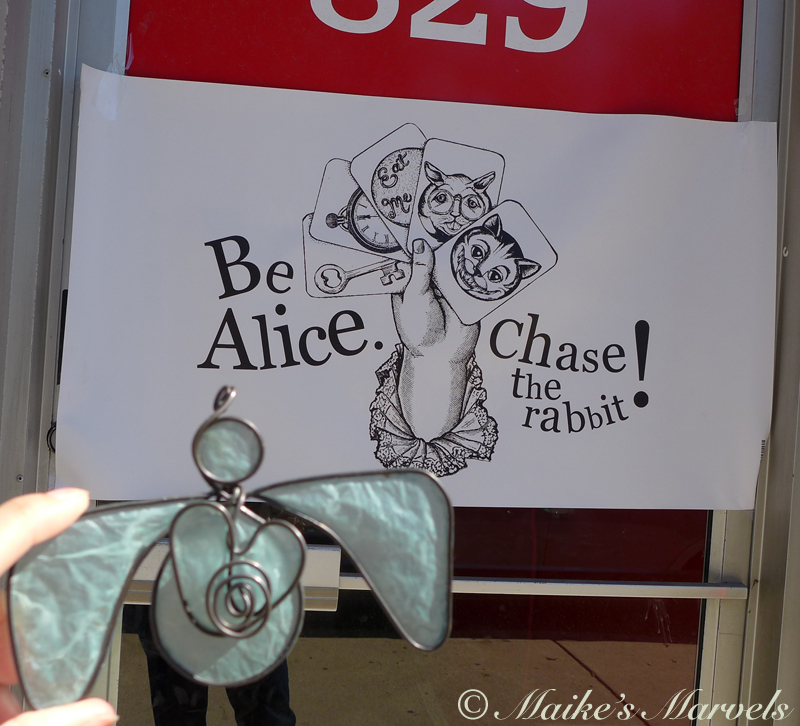 Alice performances are from September 22 to October 21, 2018 Saturdays and Sundays beginning at 1:00pm (tours leave in 15-minute intervals).  All tours leave from August LaCapra State Farm, 829 Chicago Avenue, which is where my rabbit hole is located.  Regular tickets are: $25 / $17 for students with ID. I got to visit my rabbit hole, and admire art by local acquaintances. 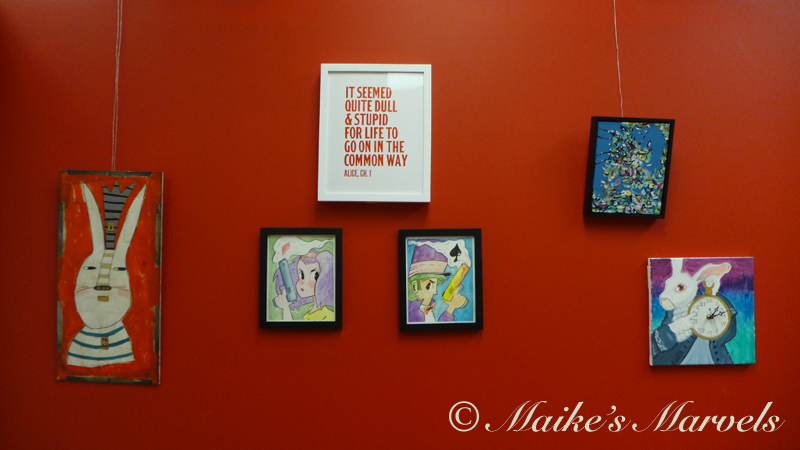 Sean Archer made a mid-century rabbit hole as a pop-up. 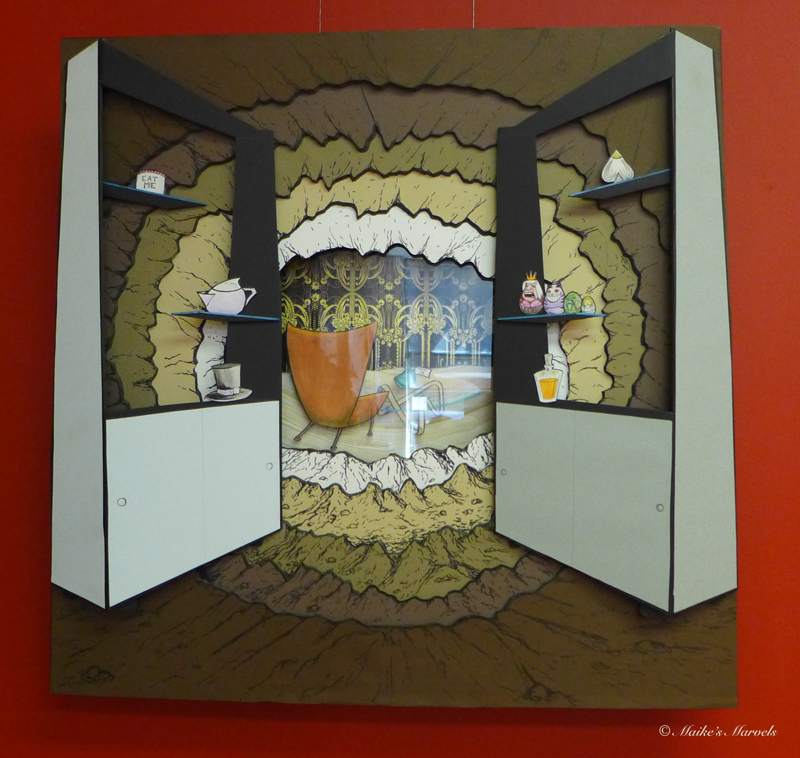 Joan Muller has hidden messages in her gorgeous Alice quilt. 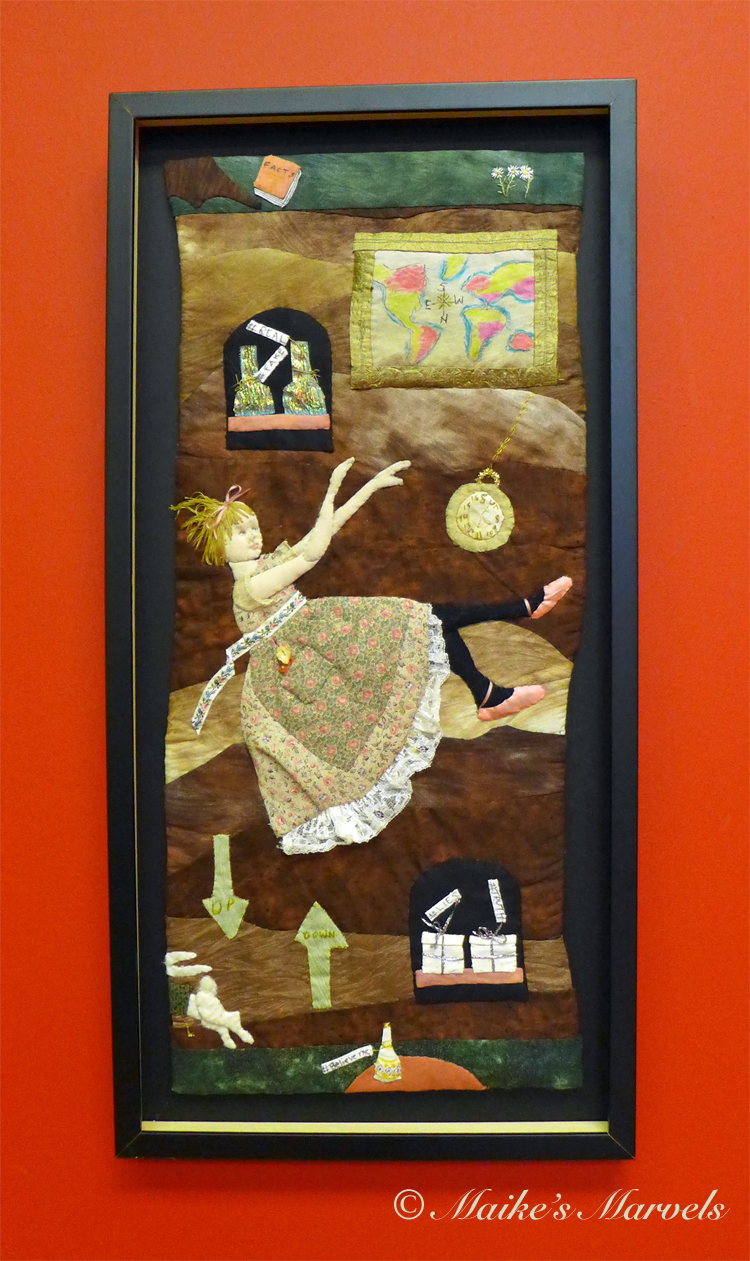 There was a lovely vignette of RSVPs along with works by Hannah Litvan and Meredith Kopelman. Not pictured is John Randle’s self portrait. 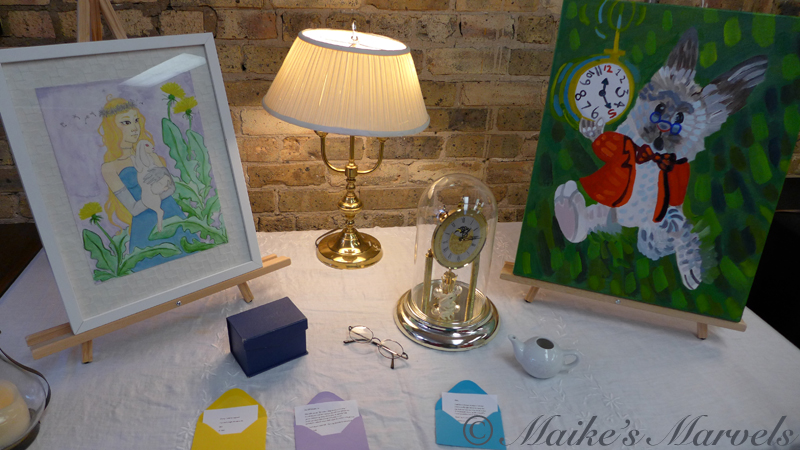 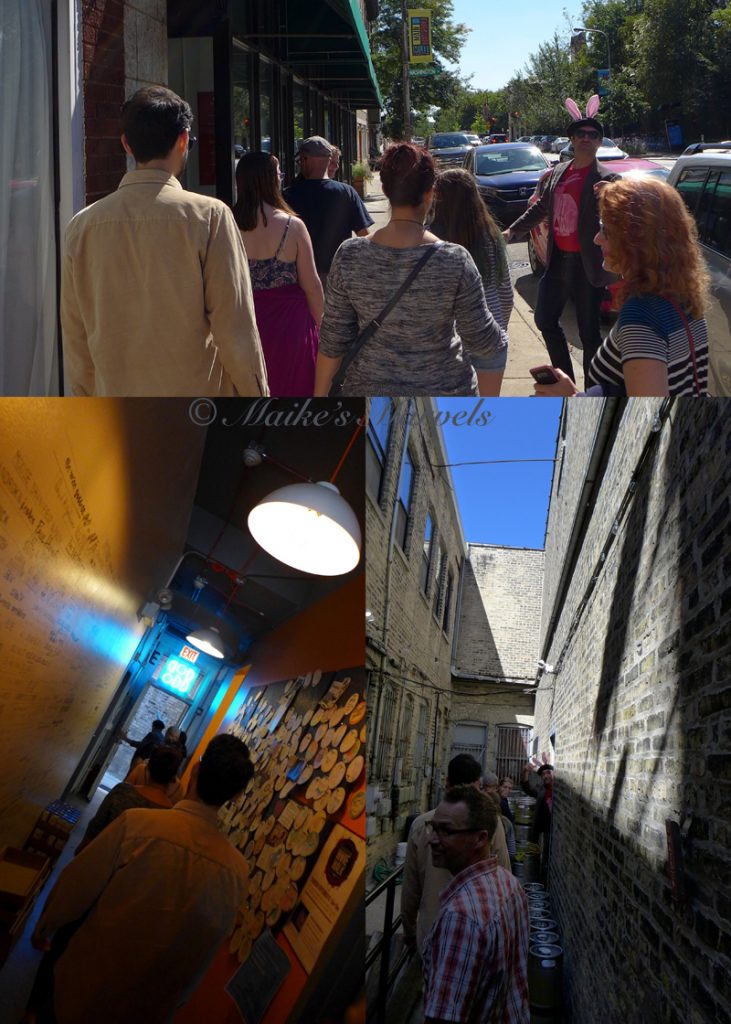 At Sketchbook Brewing, we were introduced to a mouse and his friends, and played wonderful games. 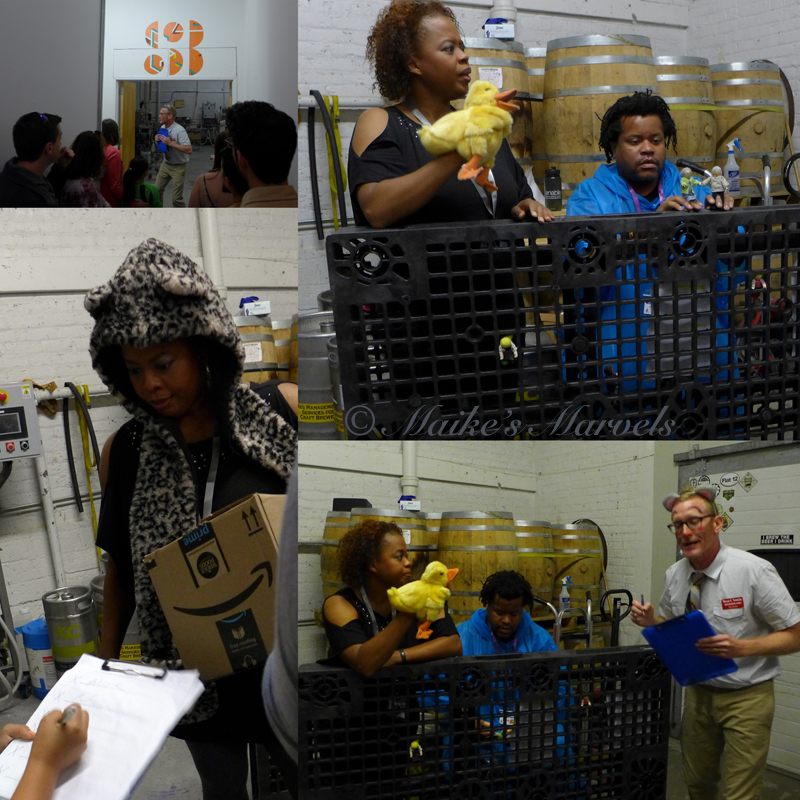 Then we heard about an amazing wondrous dream. 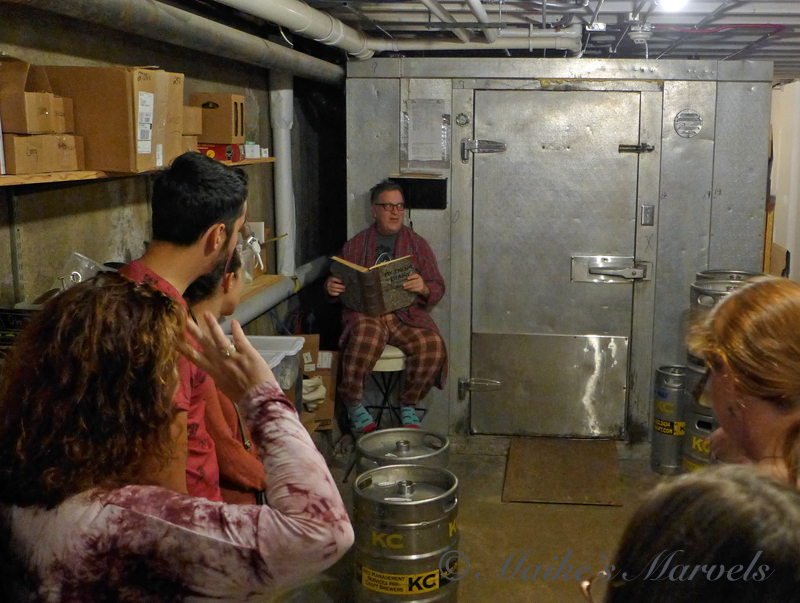 At the Main-Chicago Newsstand we were asked who we were. 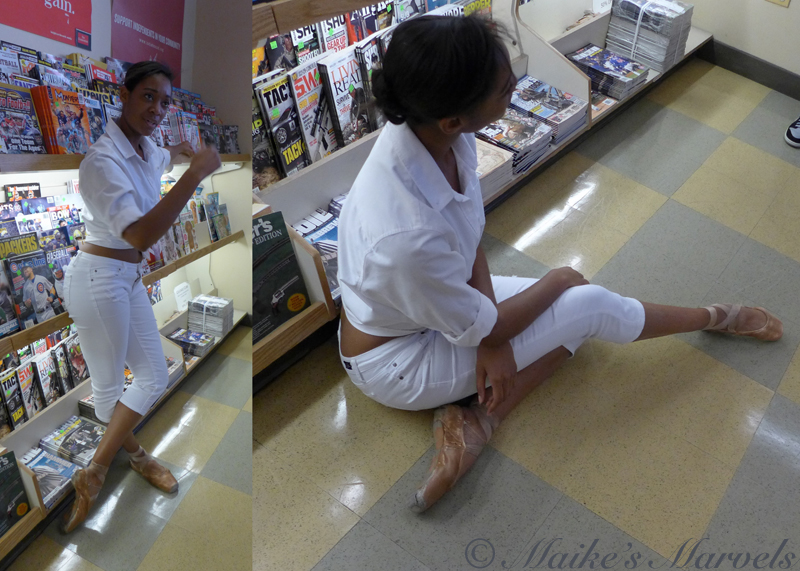 By Piccolo Theater/the Metra Train Depot we watched a moving picture with the Cheshire Cat. 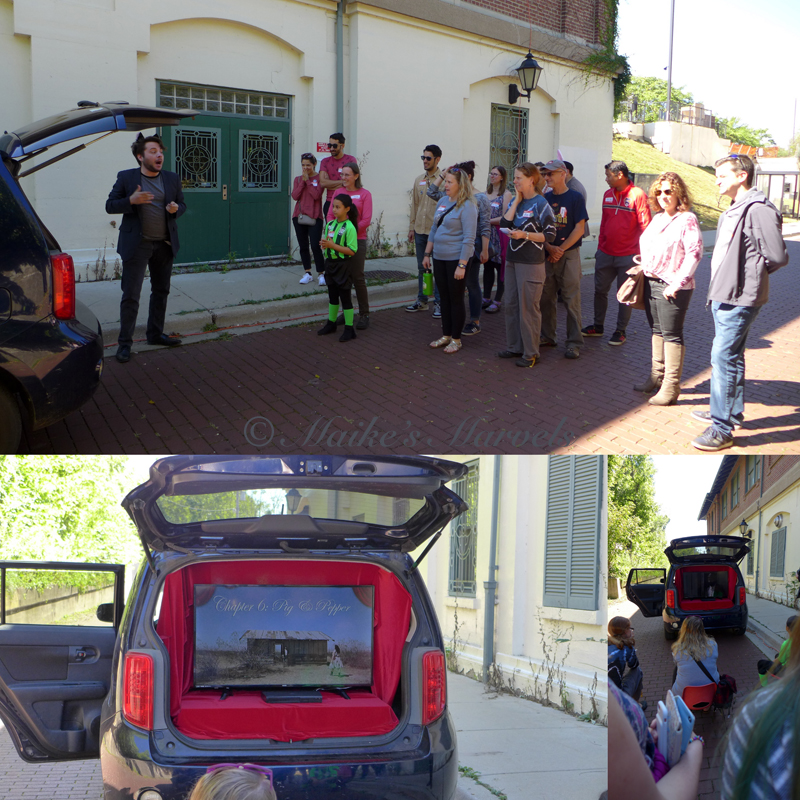 Then we were ushered to a tea party, where first we felt small, and then became giants. 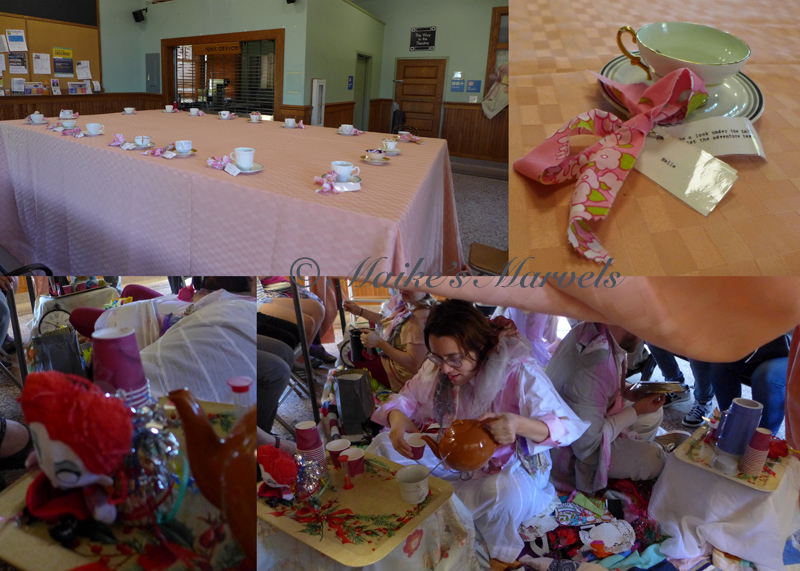 Characters greeted us throughout the tour. 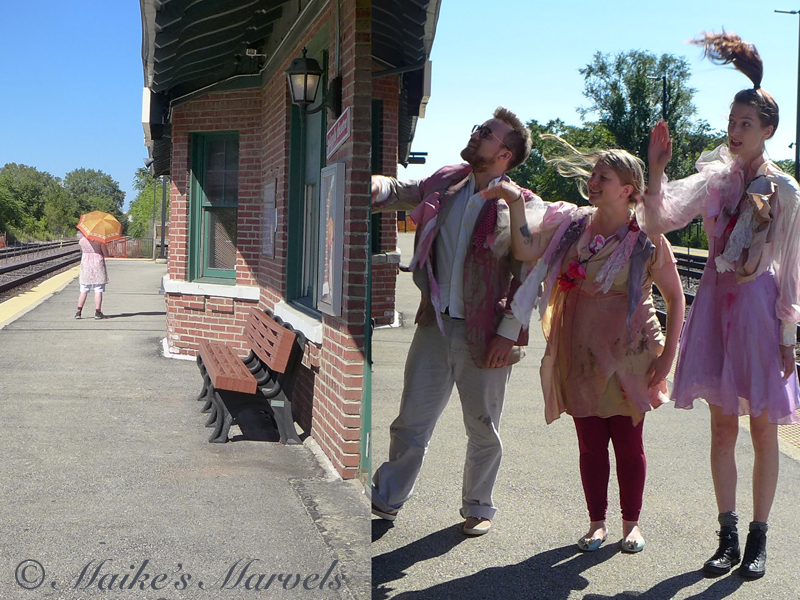 Then we met the Queen of Hearts at Cultivate. 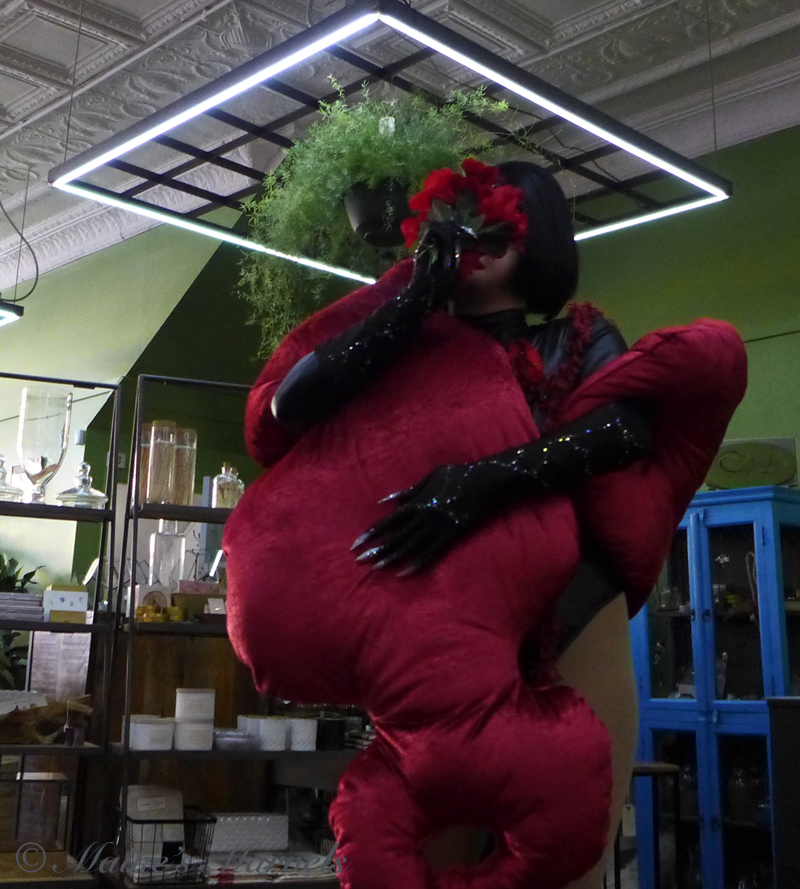 After that we were taught lessons in Seaology and received marks for participation. 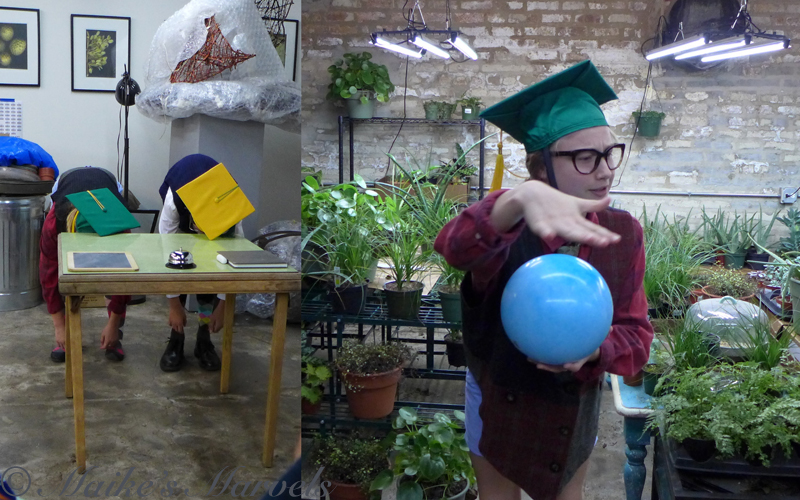 More creatures on the way out…

At La Principal, we were serenaded how to cope with our midlife bonanza, a song I hope to see on iTunes soon. 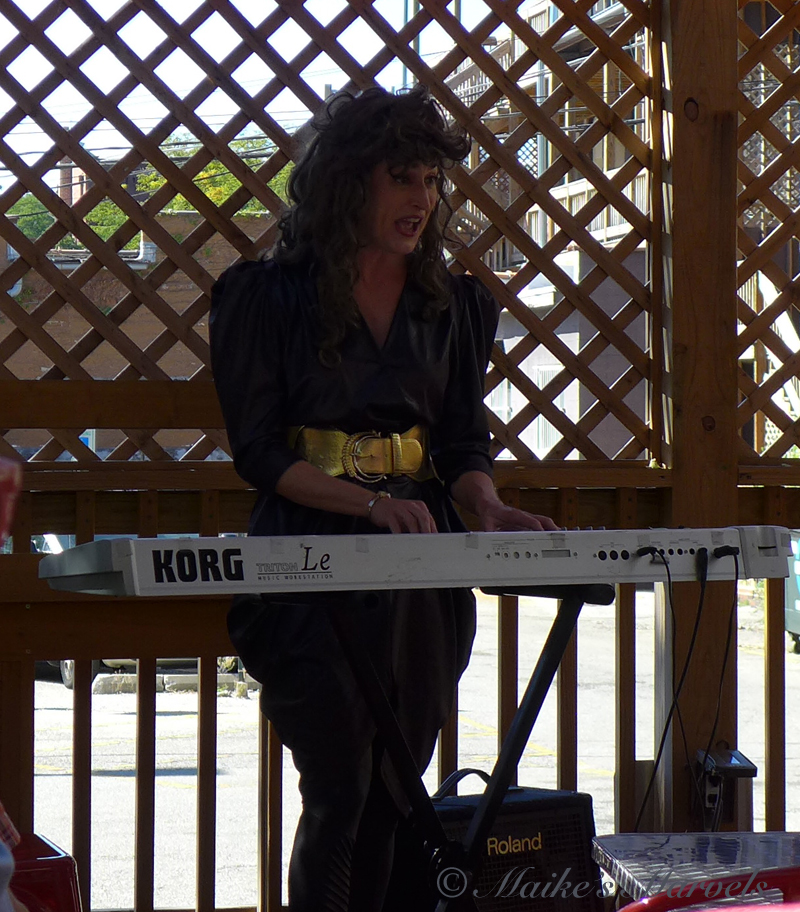 Our harried hare ushered us to Ten Thousand Villages. 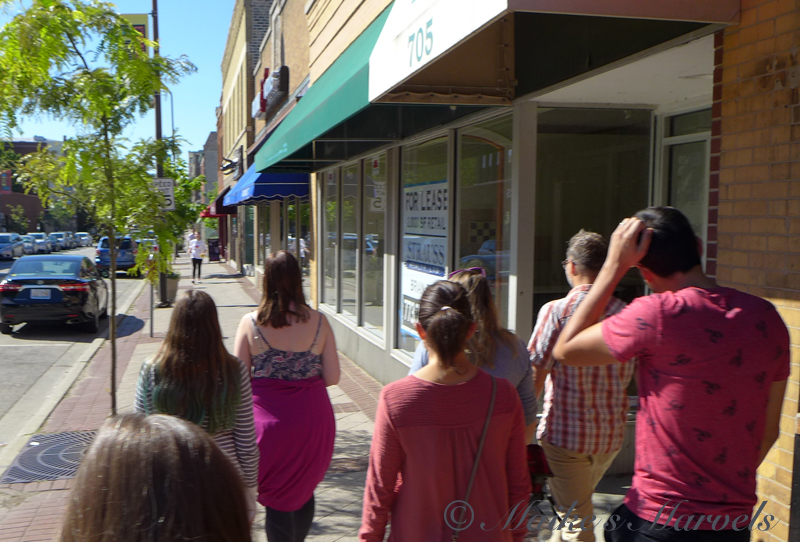 Then we watched cards play word games and give us lessons on perspective, communication and interpretation. 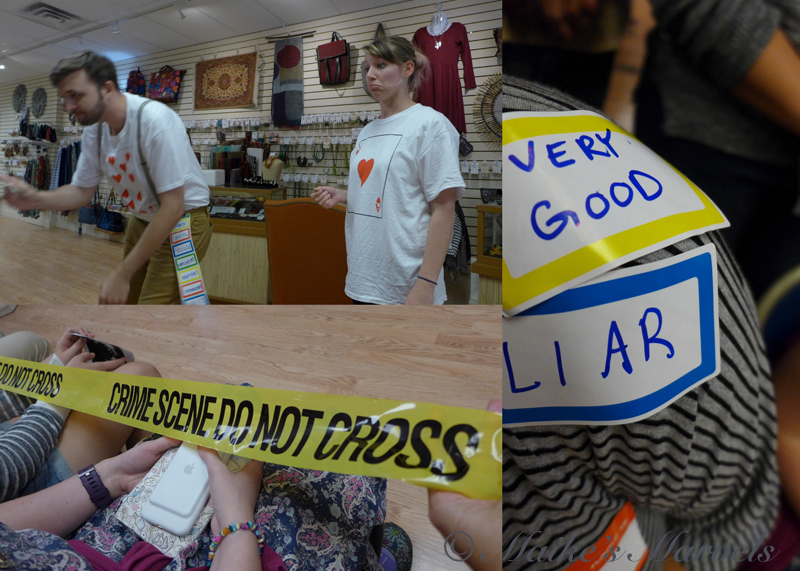 We closed at Squeezebox, where we discovered who was real.

Look at me being obnoxious after being made out for a liar! 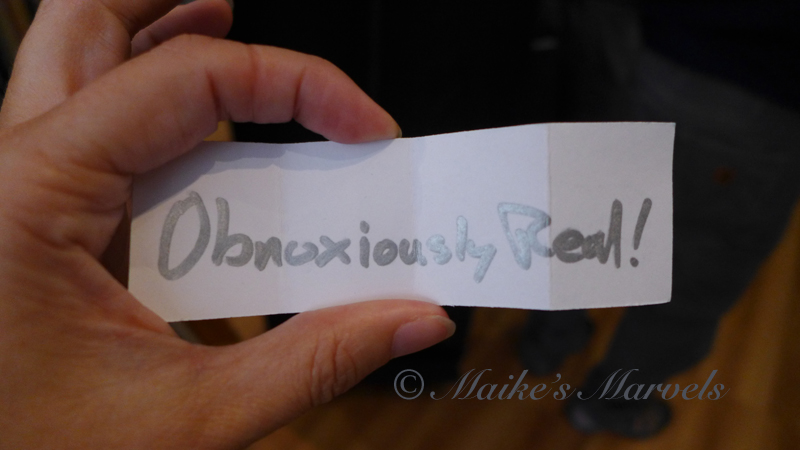 Then the French Rabbit departed. 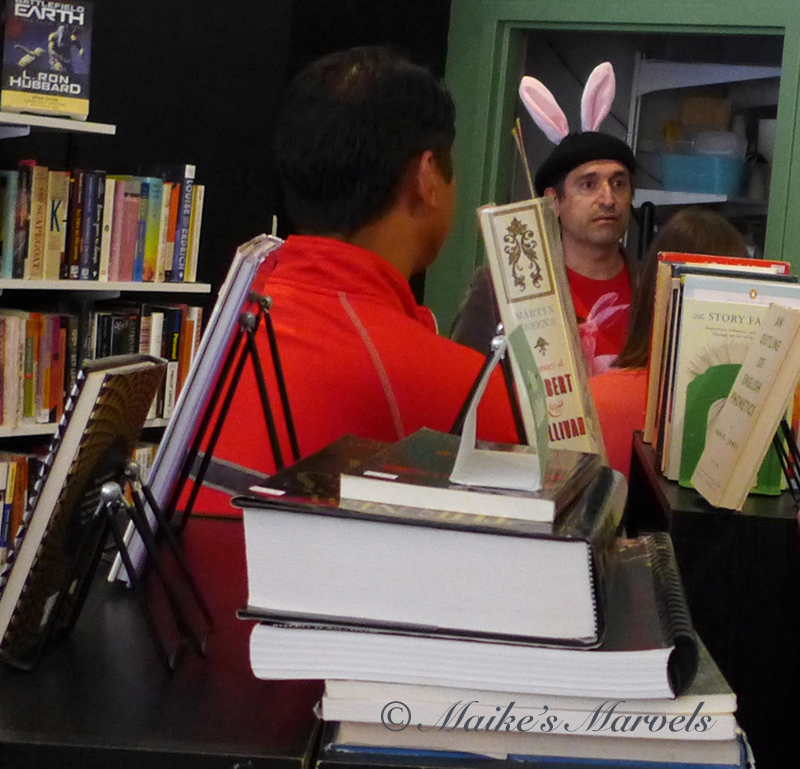 Of course Squeezebox books encouraged picking up a copy of the book after the rabbit’s farewells. 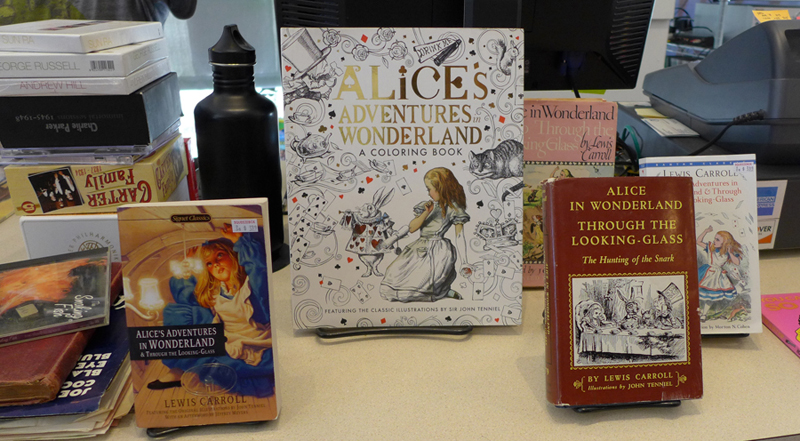 After the play we couldn’t resist climbing through the small door to enter the freshly opened Booked, where child-friendly Alice books are available. 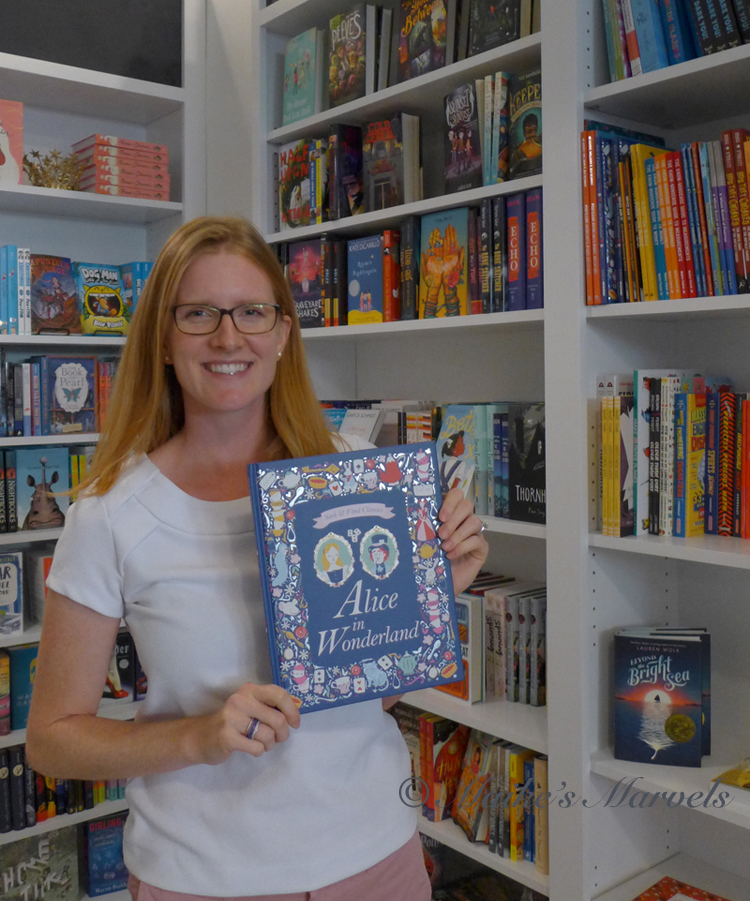 Thank you August LaCapra Agency for hosting our art work until October 21!

Be sure to visit my rabbit hole by then and enjoy this amazing play! 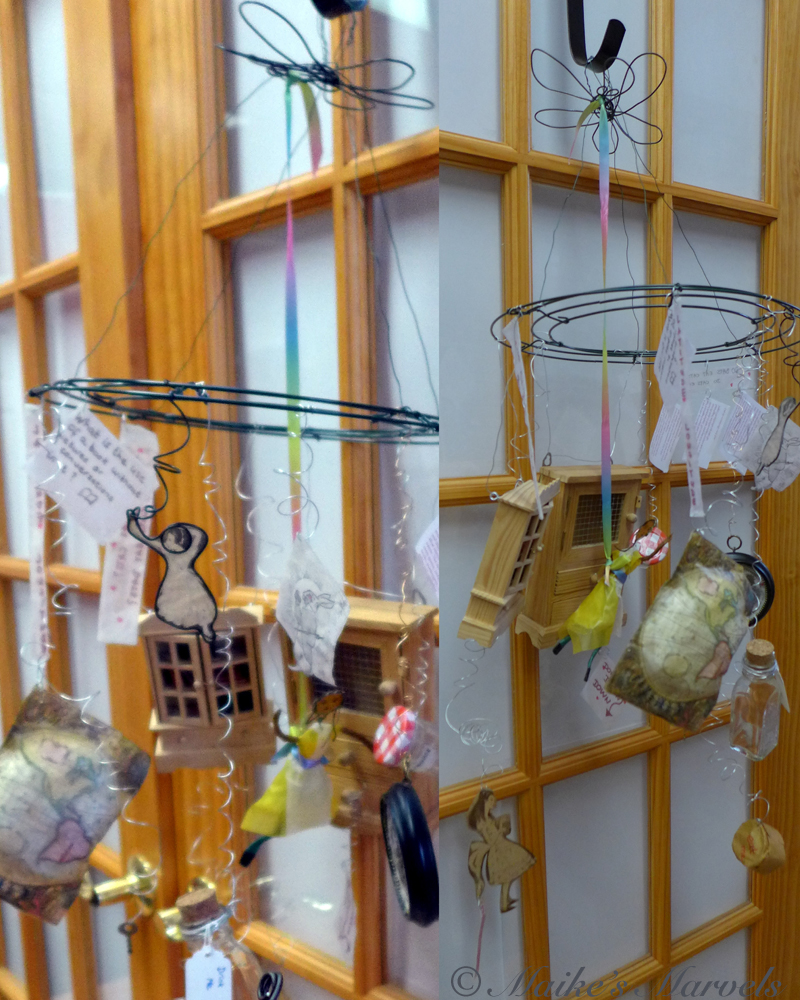 My souvenirs will go into an art journal soon. 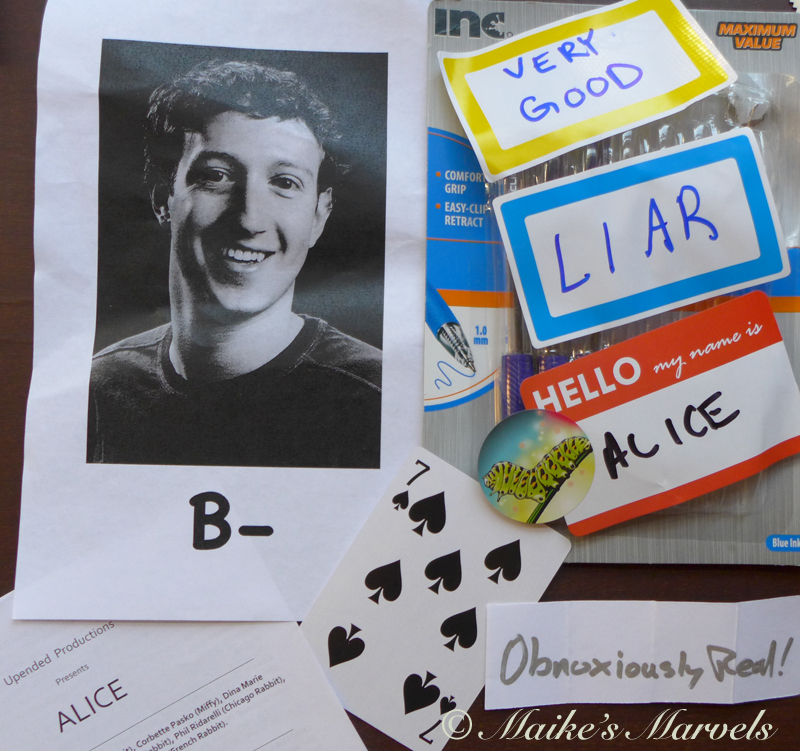 So don’t be surprised at the bunny ears along the Main-Dempster Mile this month! 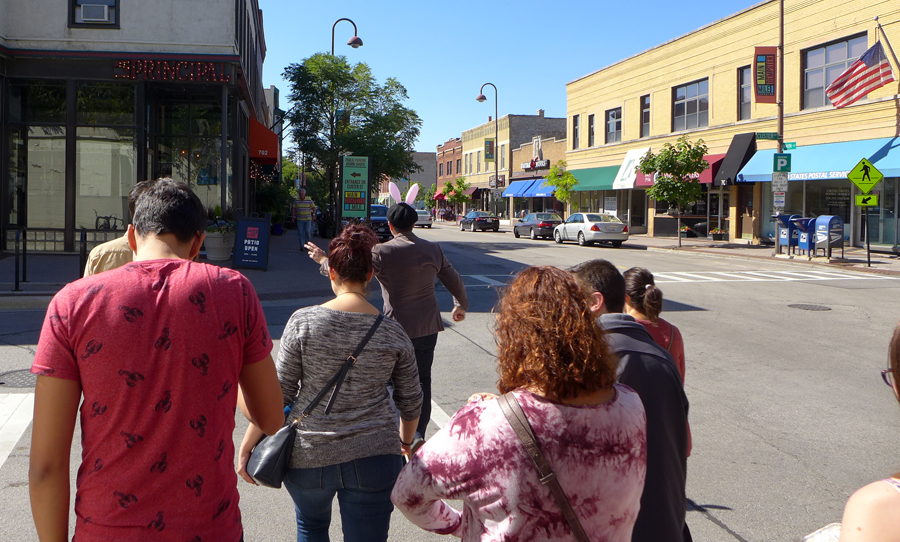