Over the Holiday Weekend I felt the need to take a hike. I decided to revisit Volo Bog State Natural Area, where I had been a few times almost a decade ago. 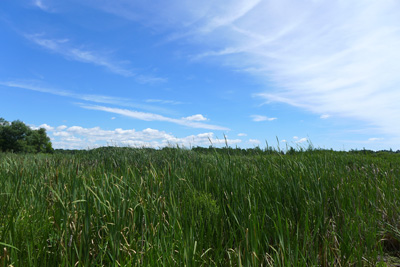 I was pleased to see the preserve was still as nice as I remembered, and that it was quiet in spite of the lovely weather. 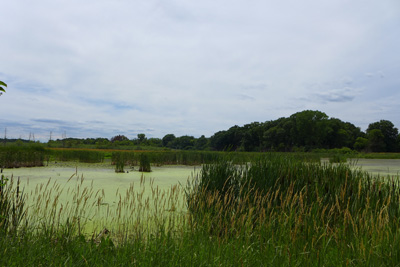 Volo Bog is the only quaking bog in Illinois, and also shows all stages of bog succession. 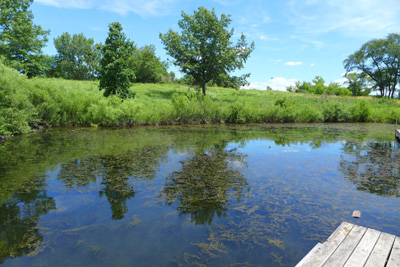 The eye shape of the bog allows visitors to see all types of vegetation that surround (literally) a bog, from the open pool of water in the center radiating out to a floating map of sphagnum moss, cattails and sedges. 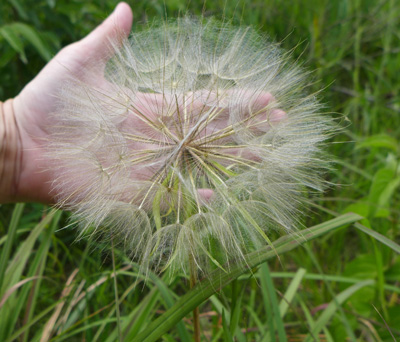 The Friends of Volo Bog campaigned to preserve the bog in 1958, and later protected it from being developed again. 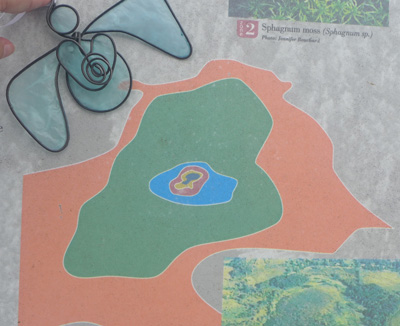 The bog is now a National Natural Landmark, showcasing a microcosm of plant succession, from bog, through wetland, to sedge-grass meadow. The Visitor Center used to be a dairy farm, and has a lovely interactive education center. 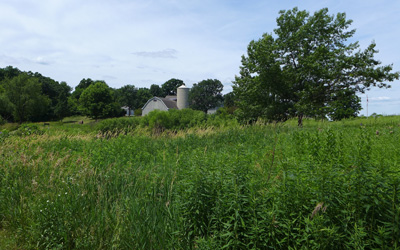 Upon entering a Western Fox Snake was slithering in its enclosure.

The upstairs room has a plethora of skulls to touch and identify, along with other displays about local flora and fauna. You can also get the trail map and nature guide there. 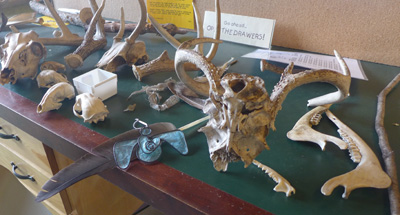 There is a lovely picnic area with tables and an outdoor privy by the parking lot. 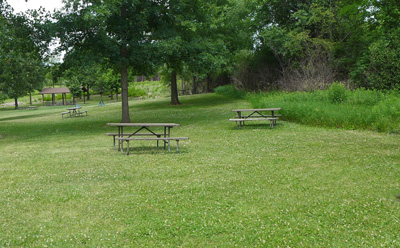 The Bog originated during the Woodfordian Stage of the Wisconsinan Glaciation. As the glaciers melted, numerous depressions formed and developed into lakes. 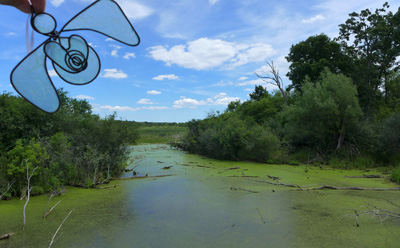 Volo Bog began filling with vegetation about 6,000 years ago, which subsequently died and formed a peat mat during decomposition. 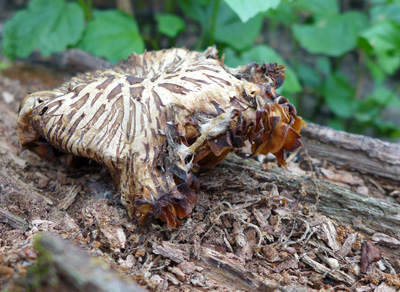 The combination of sphagnum moss and stagnant water resulted in acidic conditions within the bog community, encouraging other acid-loving plant species, such as leatherleaf, certain specialized orchids, and coniferous tamarack trees to grow. The main attraction is a half-mile boardwalk trail into the lake area of the bog. 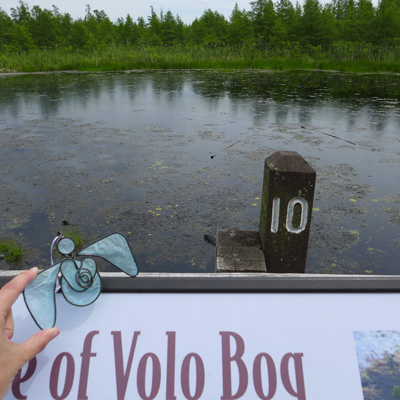 From the grassy entrance you walk through a forest of cattails until the vegetation changes. 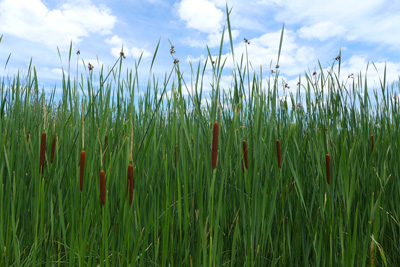 A seasonal guide gives information at various well-marked spots on what to look for. 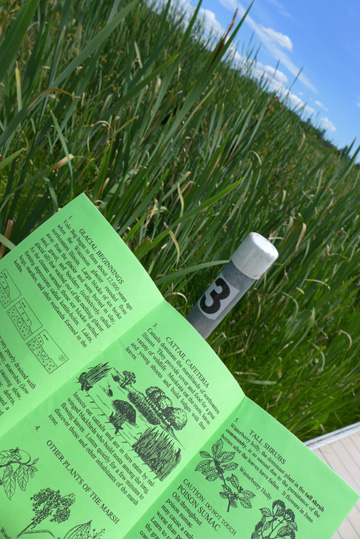 I saw a garter snake slither across the board walk, and was greeted with a bullfrog concert in the eye of the bog. 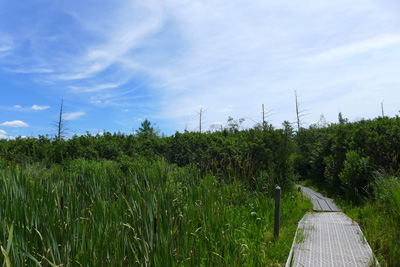 Frogs are everywhere. Linâ€™s Domain says the frog totem symbolizes metamorphosis into oneâ€™s personal power and reminds us to not get bogged down (haha) with day-to-day living. 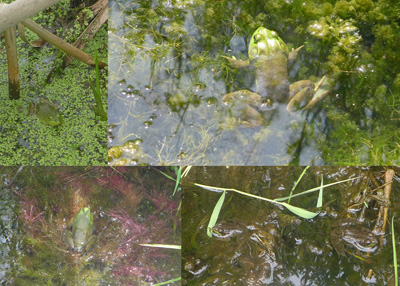 I also spotted some turtles, and helpful teens pointed out a catfish in the other pond area where tadpoles were abundant.

I then took the 2.5 mile trail surrounding the bog. There is a lovely play area for kids where they can interact with nature. 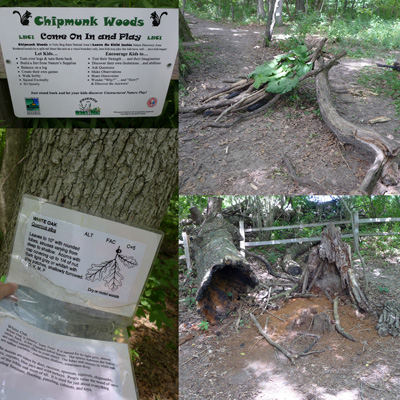 I spotted some beaks peeking out of bird-hatcheries, and enjoyed the variety of bird, cricket and for noises throughout the trail. 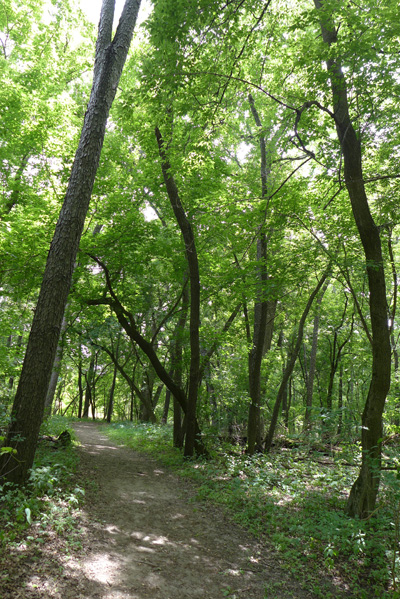 It got a bit hot along the way, but fortunately there are rest areas. 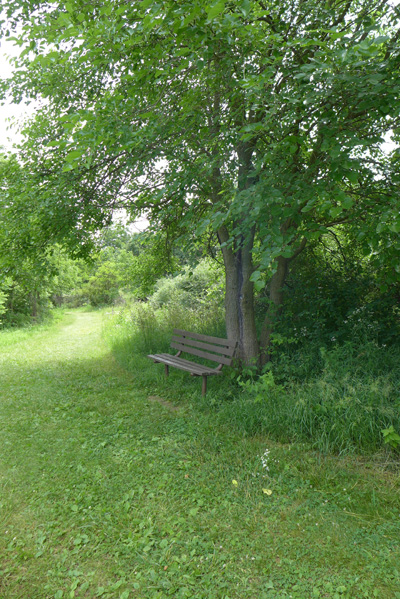 After some fortification and hydration I carried on. 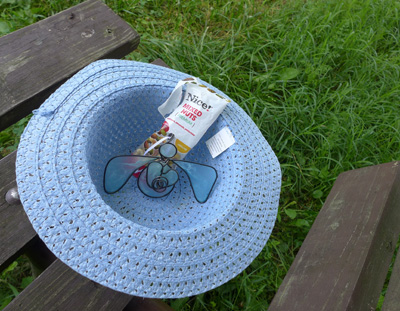 A marker directed me toward the observation â€˜towerâ€™ which seemed further than it looked on the map. 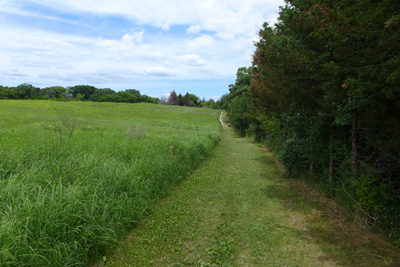 I found was a small observation hut on ground level. 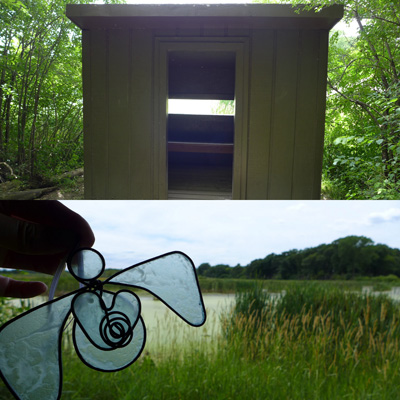 I came upon some lovely insects along the way. 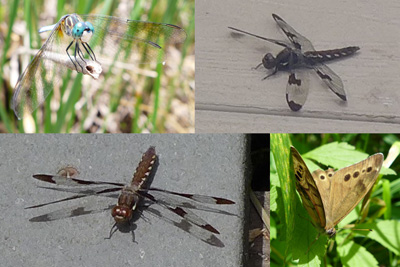 Markers indicated which way to go and how far I had gone along the trail. 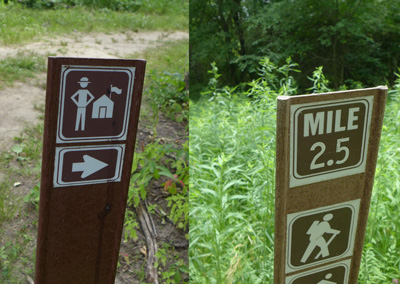 I also passed other walkers along the trail, so it was a lovely blend of being solitary without feeling lost. 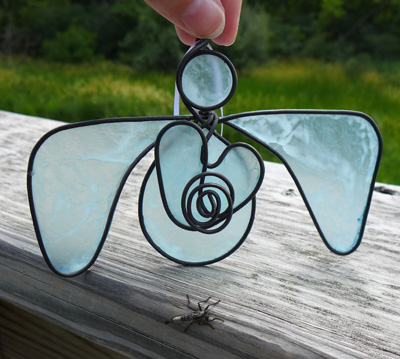 As I reached the picnic area, I was at the same level of two herons, just separated by a meter of shrubbery. Watching them walk past was magical. 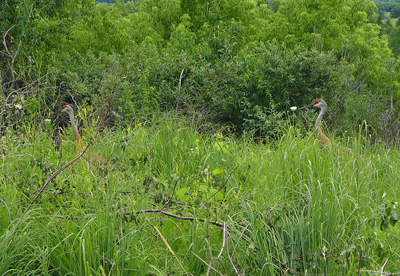 Herons have powerful independent and solitary energy. I rested my feet for a bit before getting back in the car. 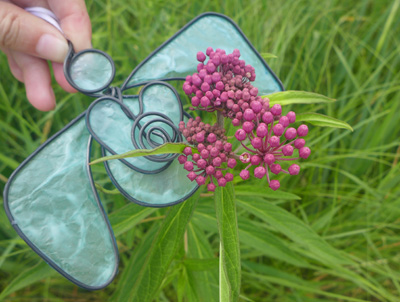 Volo has a car museum as well, but I havenâ€™t visited that yet.

Illinois has lots of places to hike and stretch one’s legs, so I will make it a point to go on more excursions this summer. 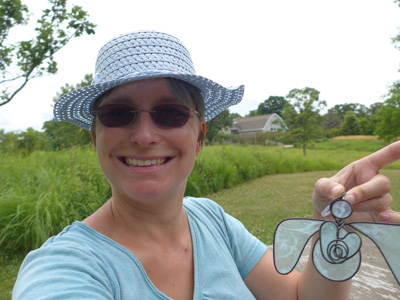 Check out what the Friends of Volo Bog are up to here. 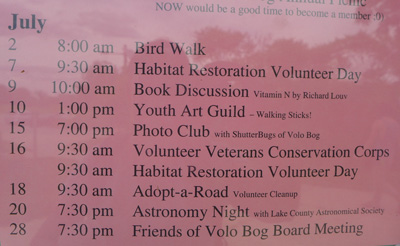