Since I’ve lived here I have passed the Toby Jug Museum numerous times. It always looks closed, but the hours are posted on the door and you can just ring the bell to be let in. 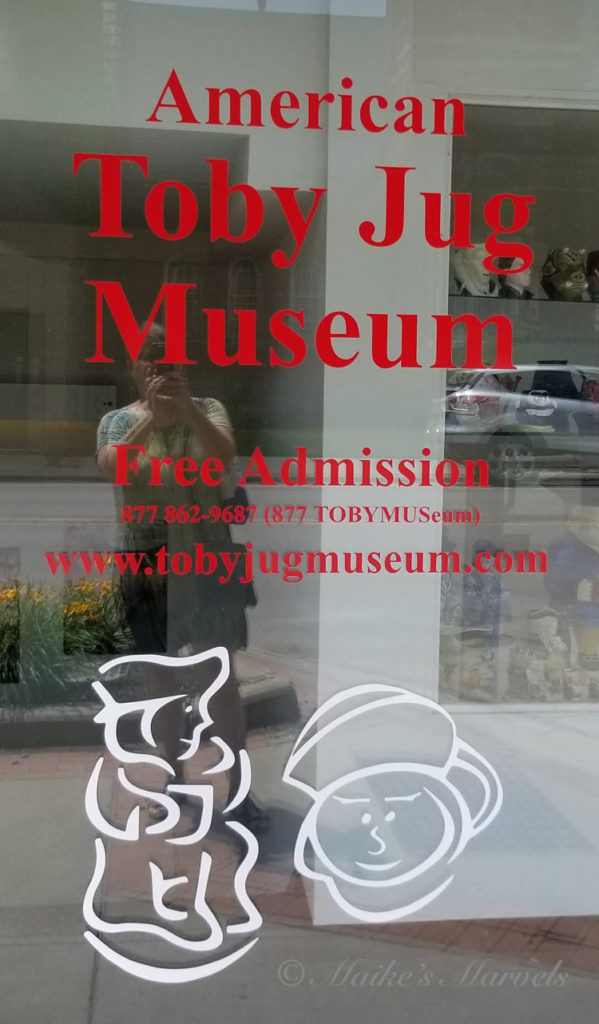 The American Toby Jug Museum in Evanston houses more than 8000 Toby and Character jugs.  It is the largest collection of its kind in the world.

We were not prepared for the vast amount of cabinets housing these figurative cups. 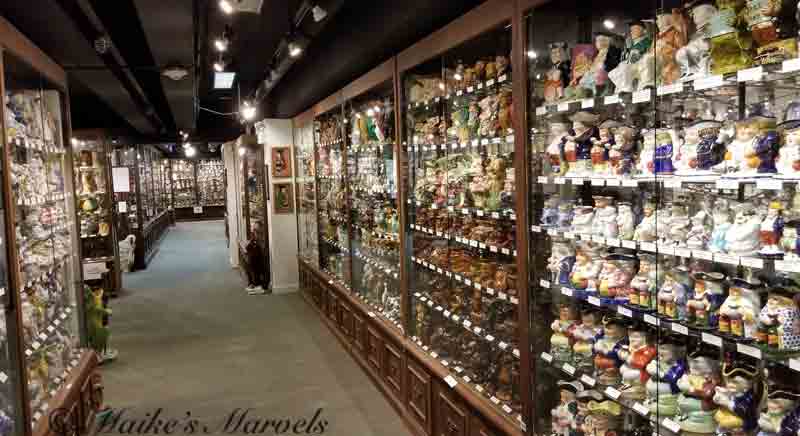 The exhibit is in chronological order, and begins with early inspiration of the Toby Jug form.

These reminded me of remind me of the Nkisi Nkondi “Conjure Vessels” I saw at the Milwaukee Art Museum. These are attributed to slaves in Edgefield, South Carolina, who were smuggled on the Wanderer vessel in 1858 from the Kongo. A nkondi houses a spirit which can travel out from its base, hunt down and harm other people, so it is has a more powerful meaning than the Toby Jugs. 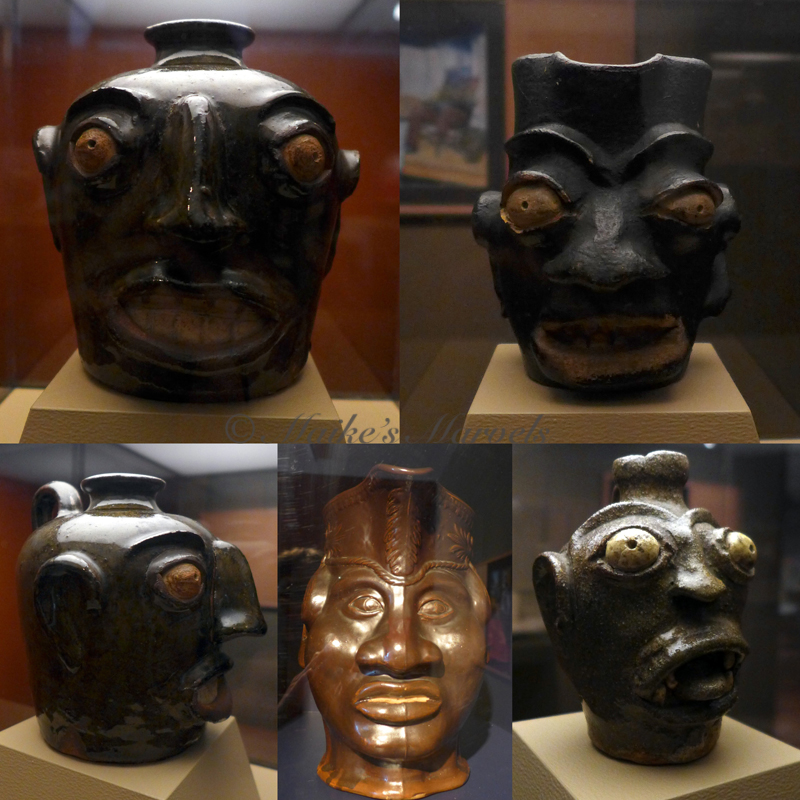 Museum founder Steve Mullins purchased his first Toby Jug at age 15, and after a while made it his mission to collect every Toby Jug known in the world. This explains why some of the earlier versions have glazes that don’t quite pass muster to the artistic eye. 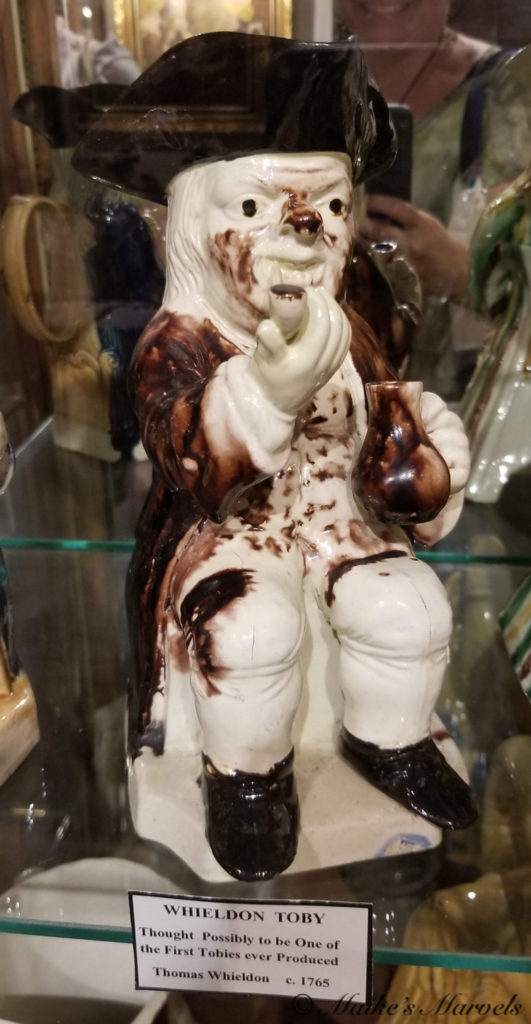 Soon the collection outgrew his home, and an alternate site was found. As he continued collecting, the basement of the building at 910 Chicago Avenue was custom-designed for his collection. It includes numerous caricatures of famous people, and pokes fun at statesmen (and -women) of various time periods. 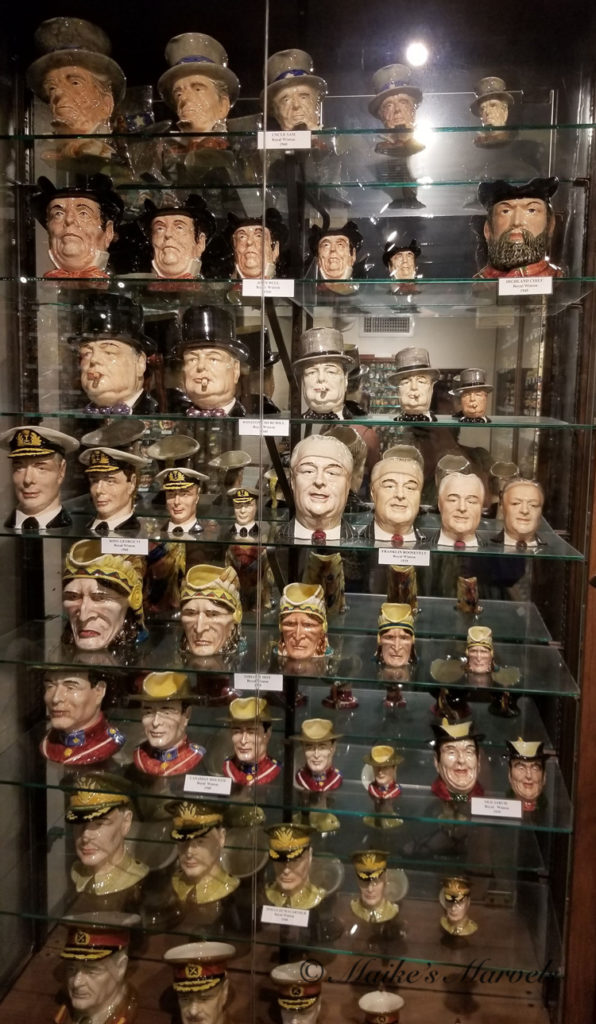 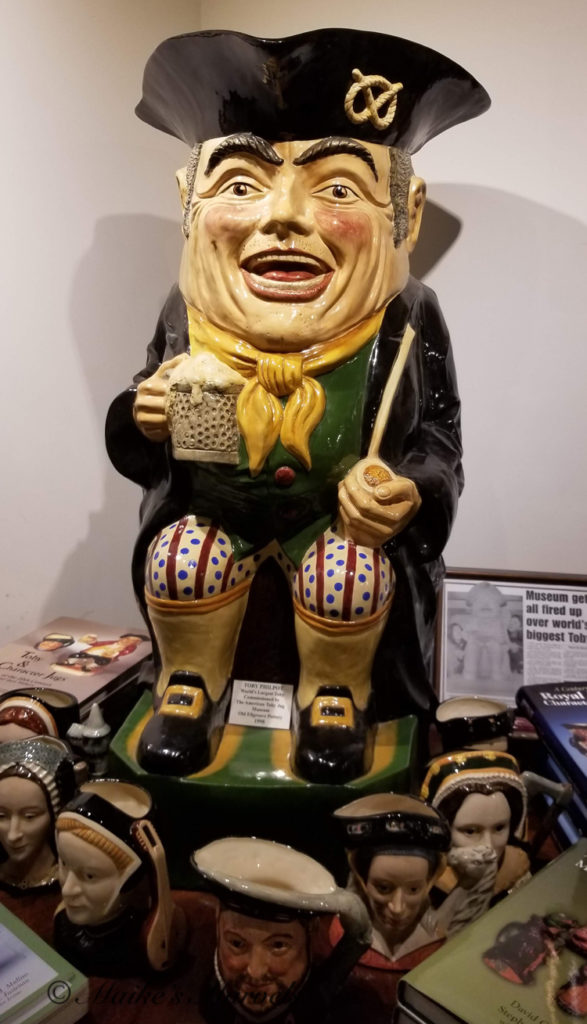 And it also has the tiniest ones. 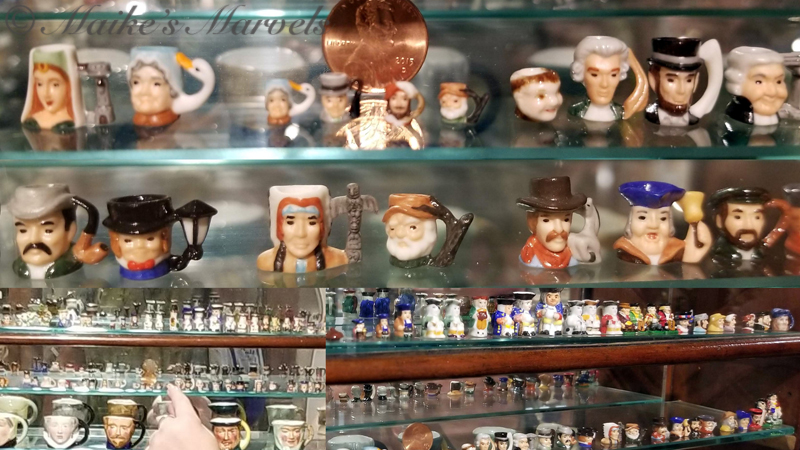 Toby Jugs are different from Beer Steins, but a few cabinets show pieces made in Germany. I found some made in Belgium and the Netherlands. 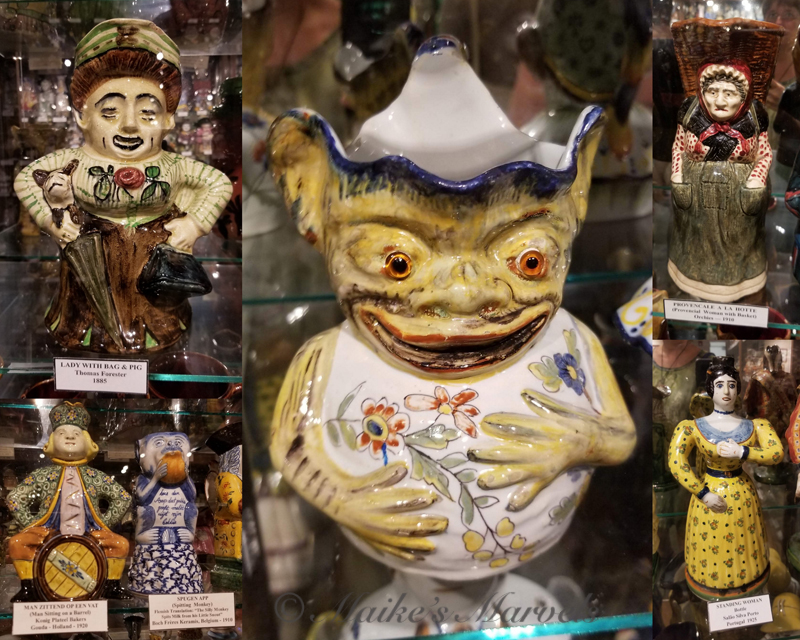 A toby jug (Fillpot or Philpot) is a pottery jug in the form of a seated person. The original or ‘ordinary’ Toby is a seated figure of a heavy-set, jovial man holding a mug of beer in one hand and a pipe of tobacco in the other and wearing 18th-century attire. 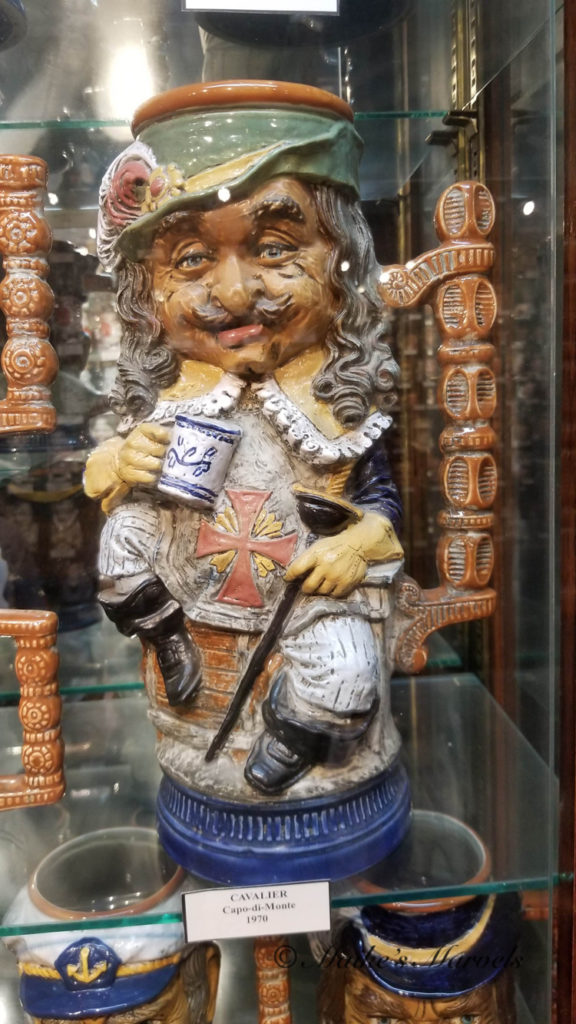 Its origin story diverges, attributing the name of the Toby Jug to either Sir Toby Belch in Twelfth Night, or Yorkshire drinker Henry Elwes, who was known as Toby Fillpot. From that prototype the shape took on a life of its own. 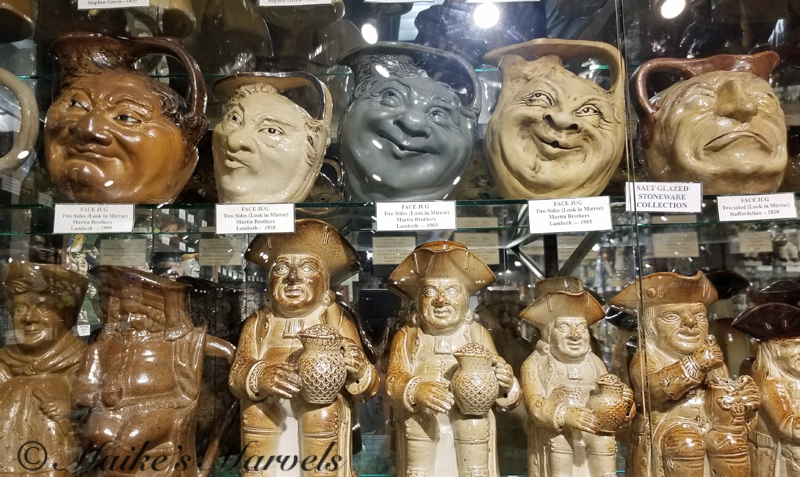 The pots take aim at political figures throughout history, represent professions, and poke fun at the original makers of beer. 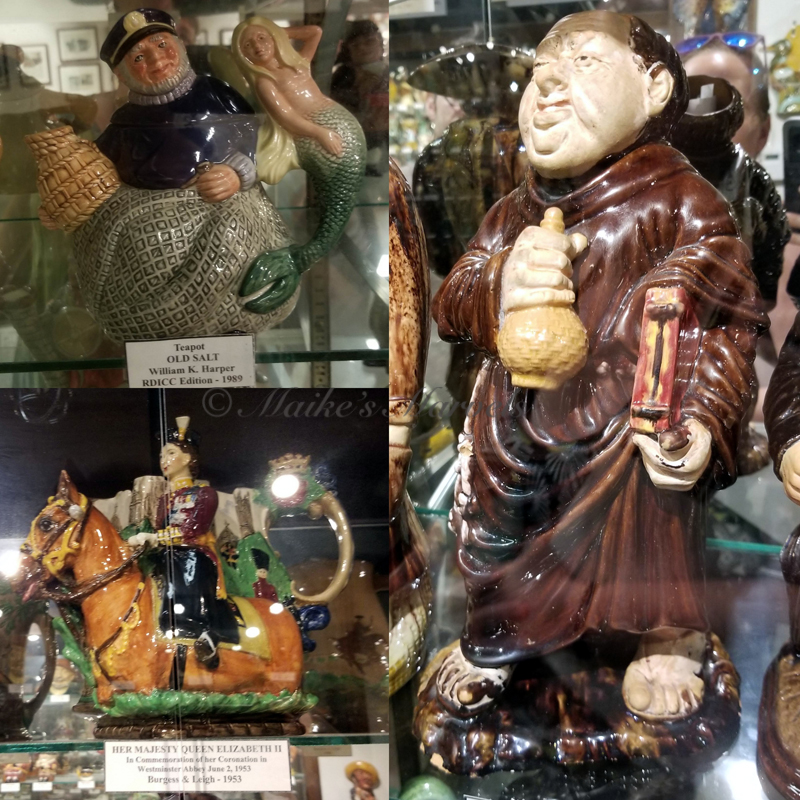 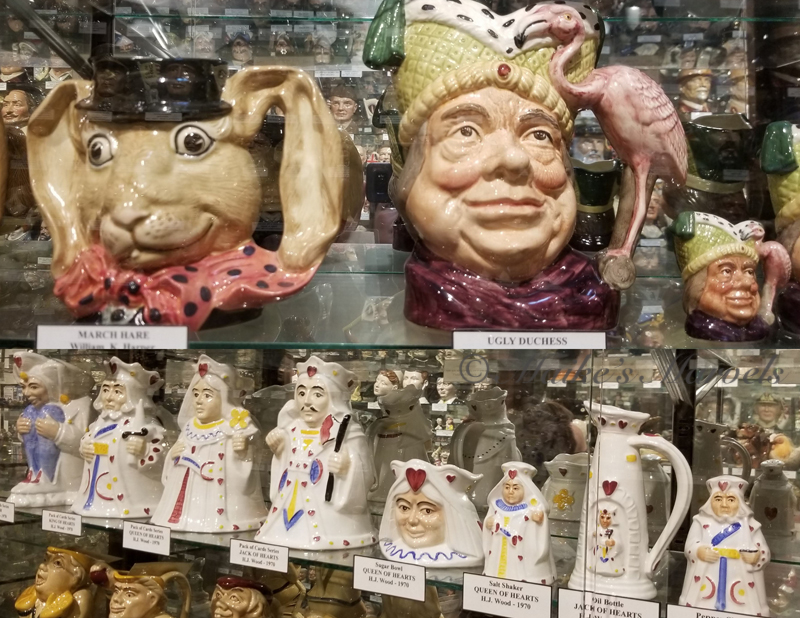 A sign of the times, numerous mugs are politically incorrect now, but show the fascination with different cultures and stereotypes that took hold. Of course I run around in my hat and striped apron!

Exotic subjects continued through the 1990s. 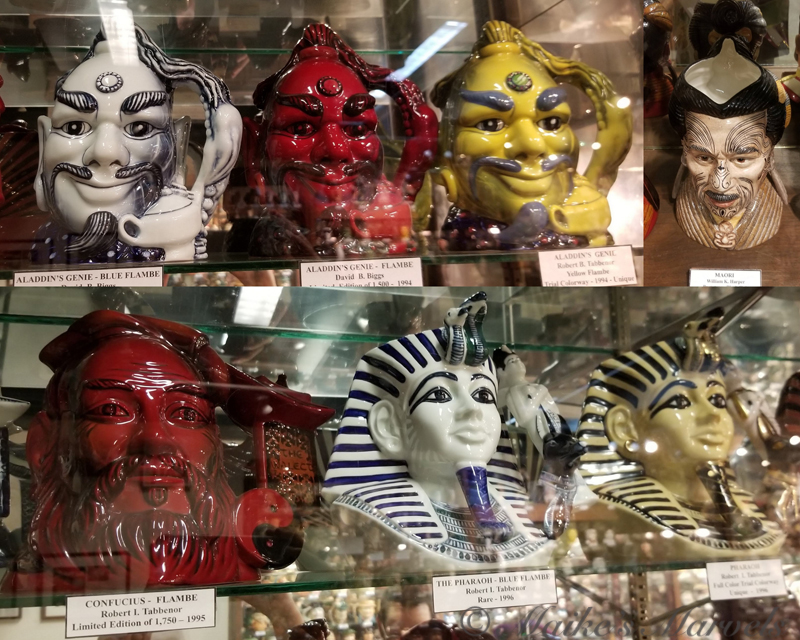 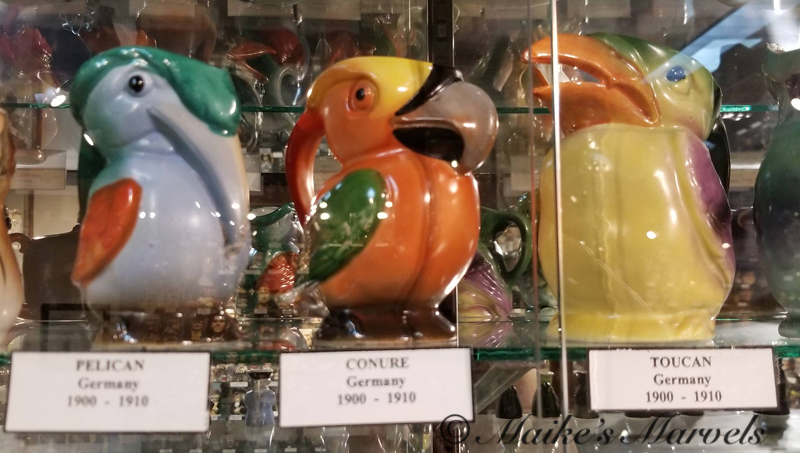 The craftmanship is amazing. 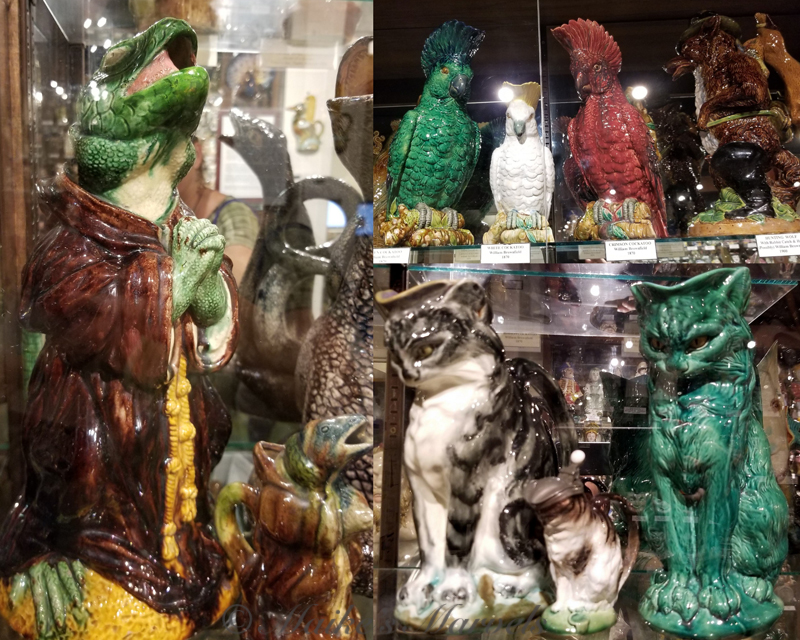 I love the butterflies.

When we got overwhelmed by the number of cabinets to view we were led to the most prized part of the collection by expert Kevin Pearson, who had numerous tales to tell about the quest for these artifacts. 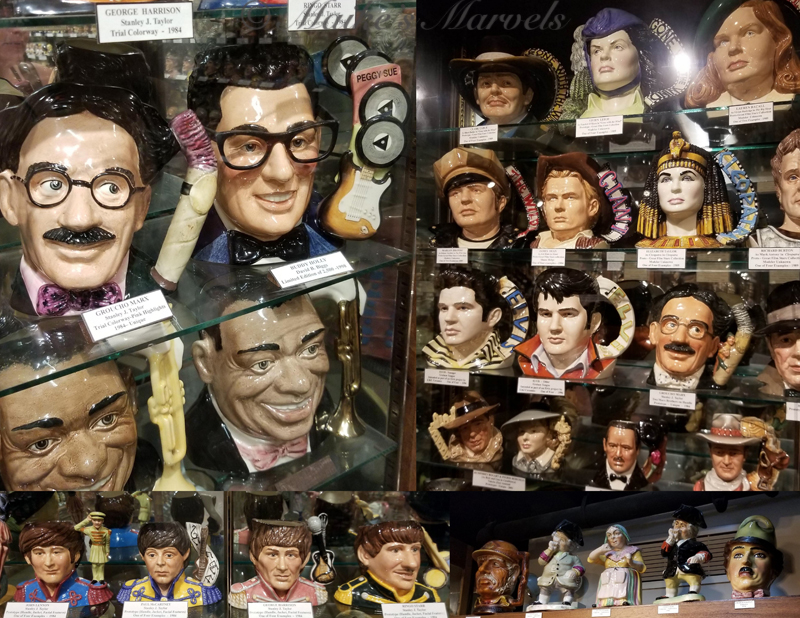 We didn’t peruse every single display, but enjoyed the ones that were more familiar to us.

Not all the pop culture Toby Jugs were put into production, and prototypes needed signoff from the actors portrayed. 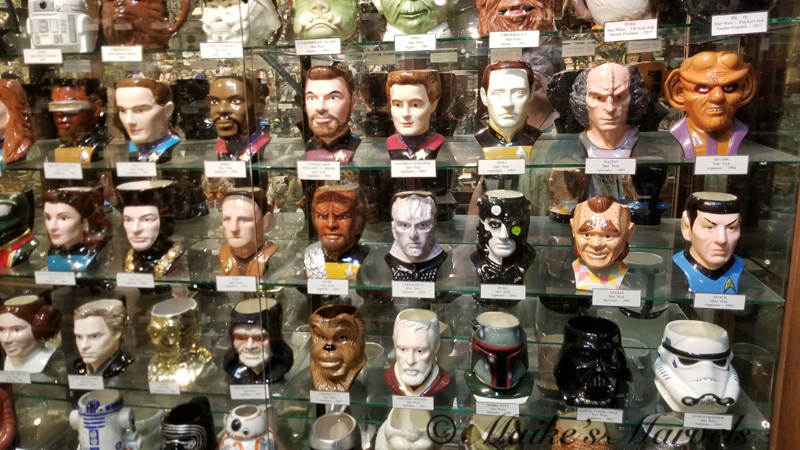 I’m sure Disney kept close tabs on their characters. 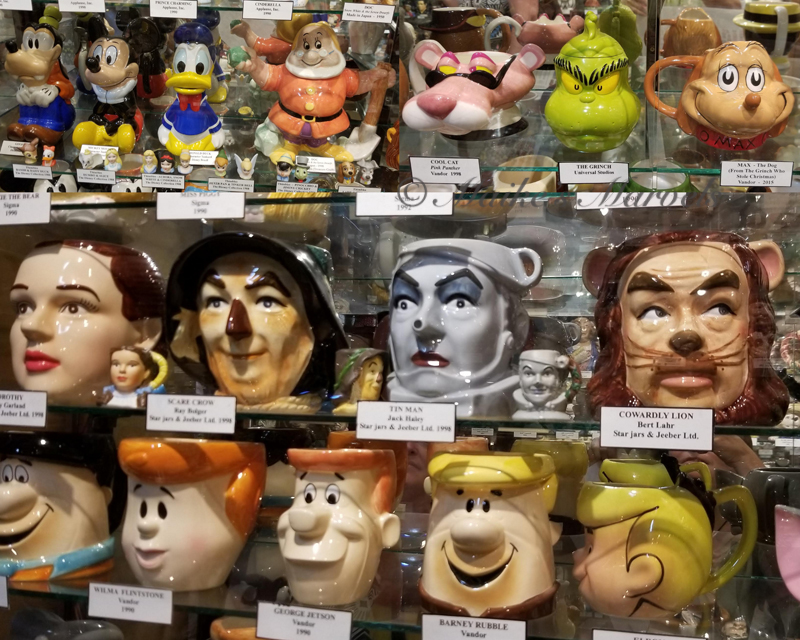 Minnie is a family favorite.

I loved these ethereal characters. 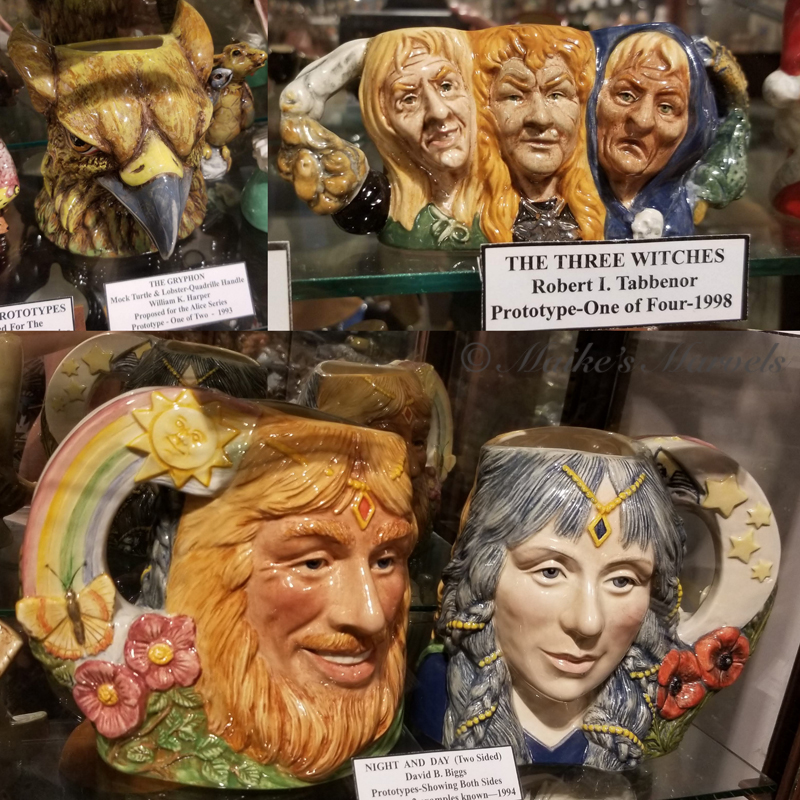 These French characters are stunning. 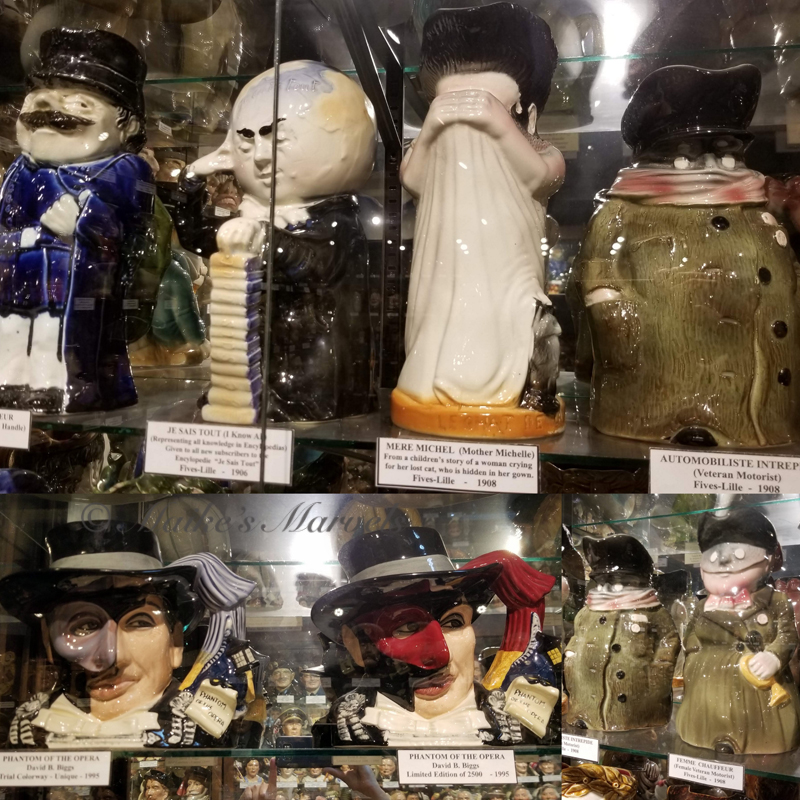 There are also Toby Jug related artifacts like tins and storybooks.

When Steve had amassed all the Toby Jugs he could find, he expanded his collection to French majolica pitchers, Royal Bayreuth German jugs, complete collections of 150+ 20th Century makers, and “the World’s largest collection of more than 1500 Royal Doulton Character and Toby Jugs and Derivatives”. 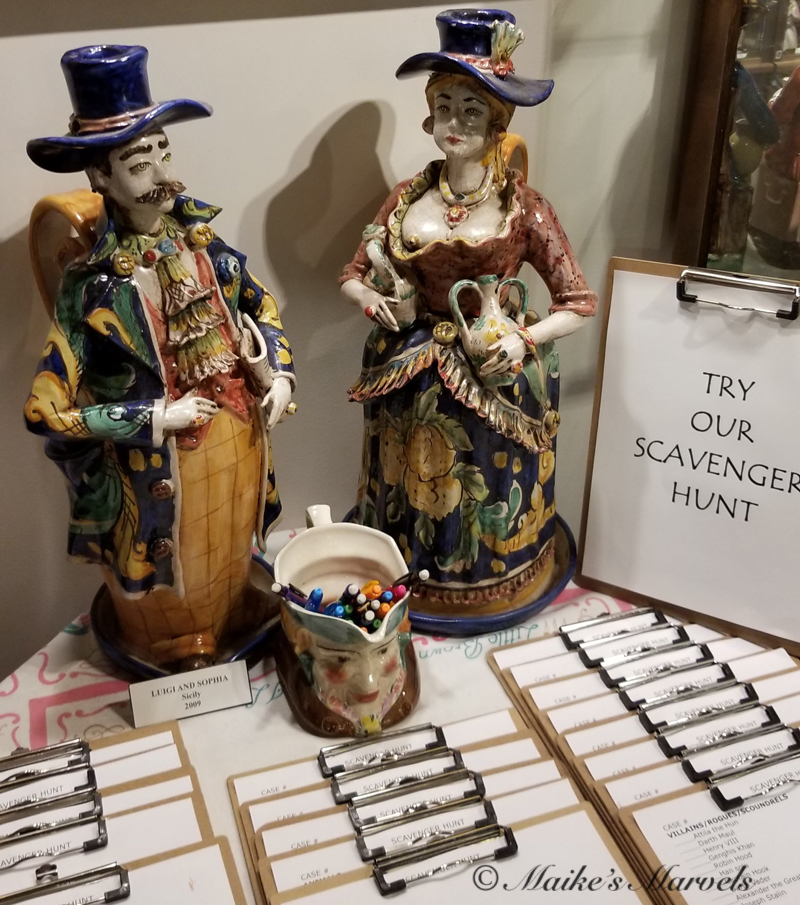 Steve Mullins wrote numerous books on his collection that are available in the museum, and of course was an expert on the catalog. 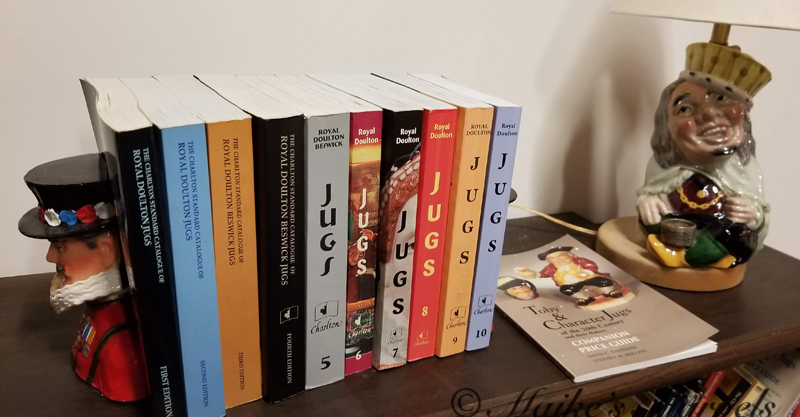 Sadly, Steve Mullins passed away in June 2019, but his board is determined to keep the museum open to the public. The Museum is open to persons of all ages, from school groups to seniors, as well as individuals interested in seeing the collection. 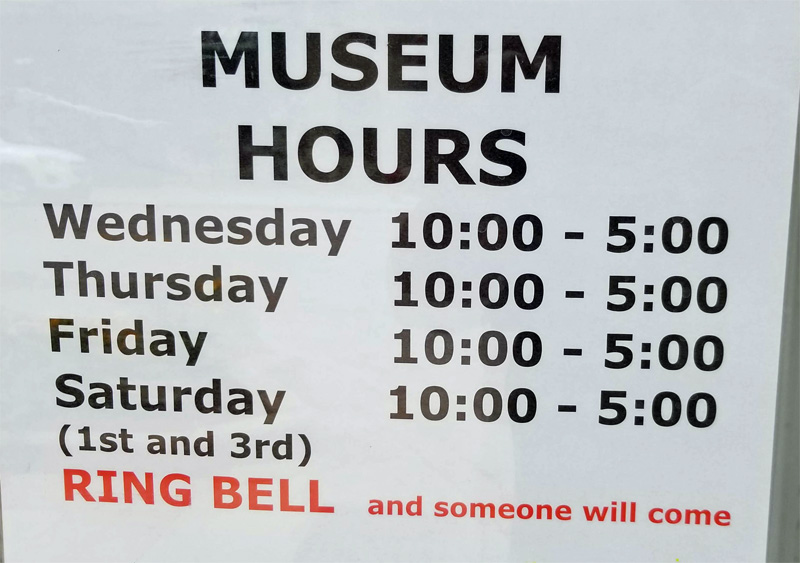 The American Toby Jug Museum is located at 910 Chicago Avenue in Evanston, Illinois 60202 and admission is free. Hours are 10 a.m. – 5 p.m. Wednesday, Thursday and Friday, and 10 a.m. – 5 p.m. on the first and third Saturday of the month. Check the website for current hours. 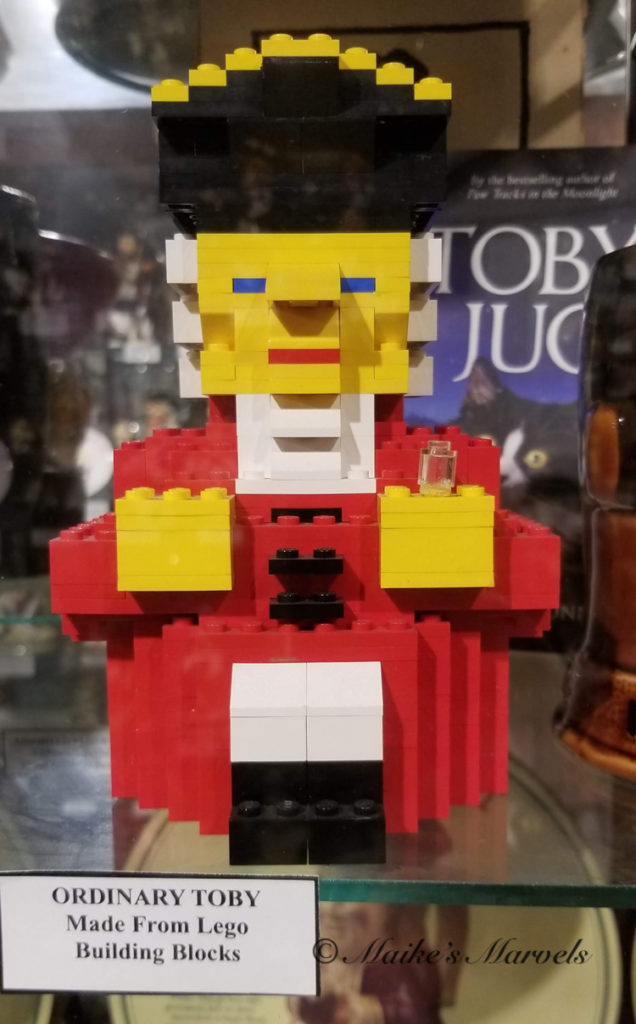 I definitely plan to return, and also want to read up on how they differ from Beer Steins that also came to have character depictions. 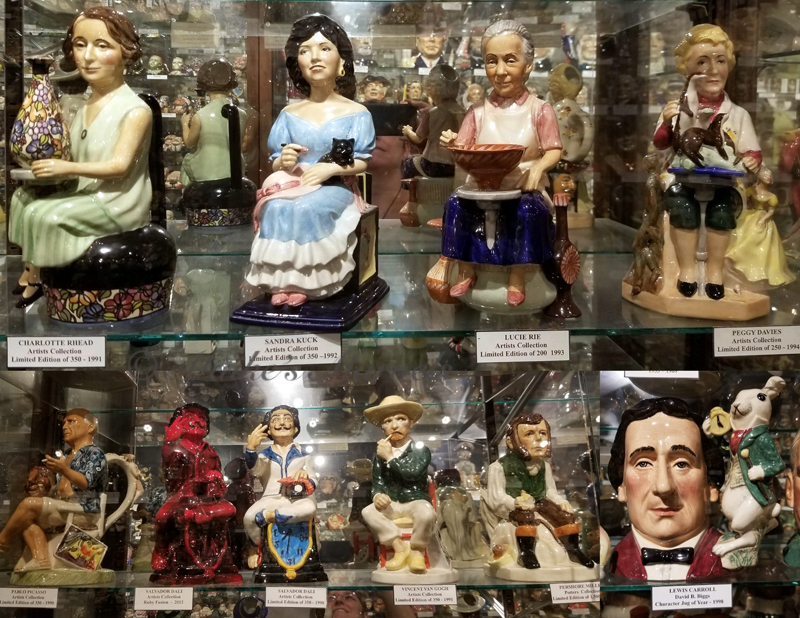 There is a small gift shop where you can peruse Toby Jugs for sale. 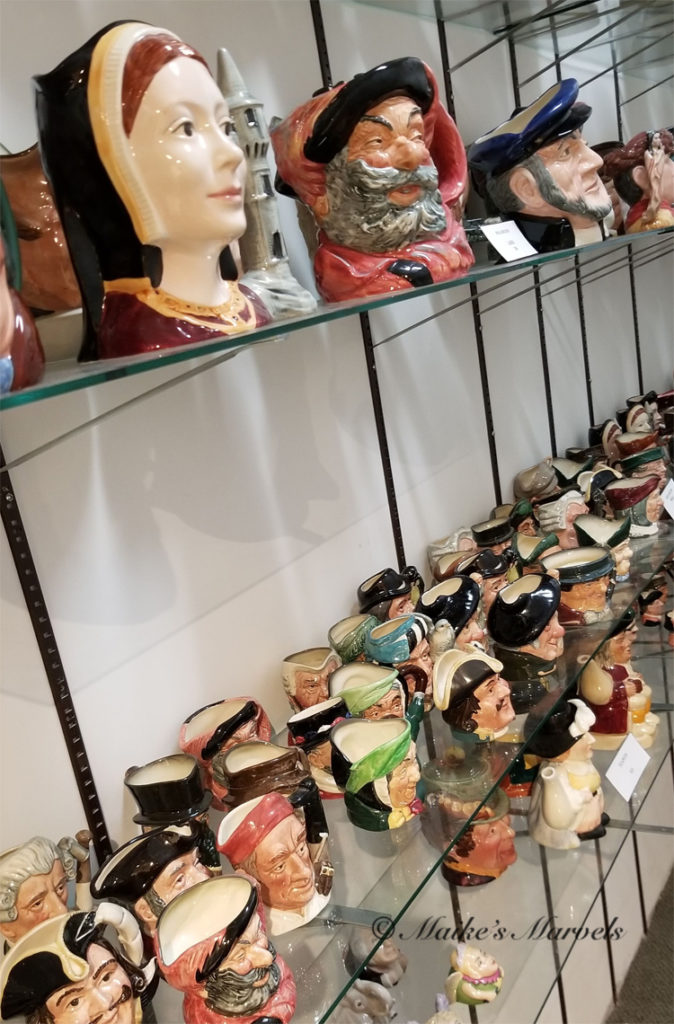 I took a memento home. 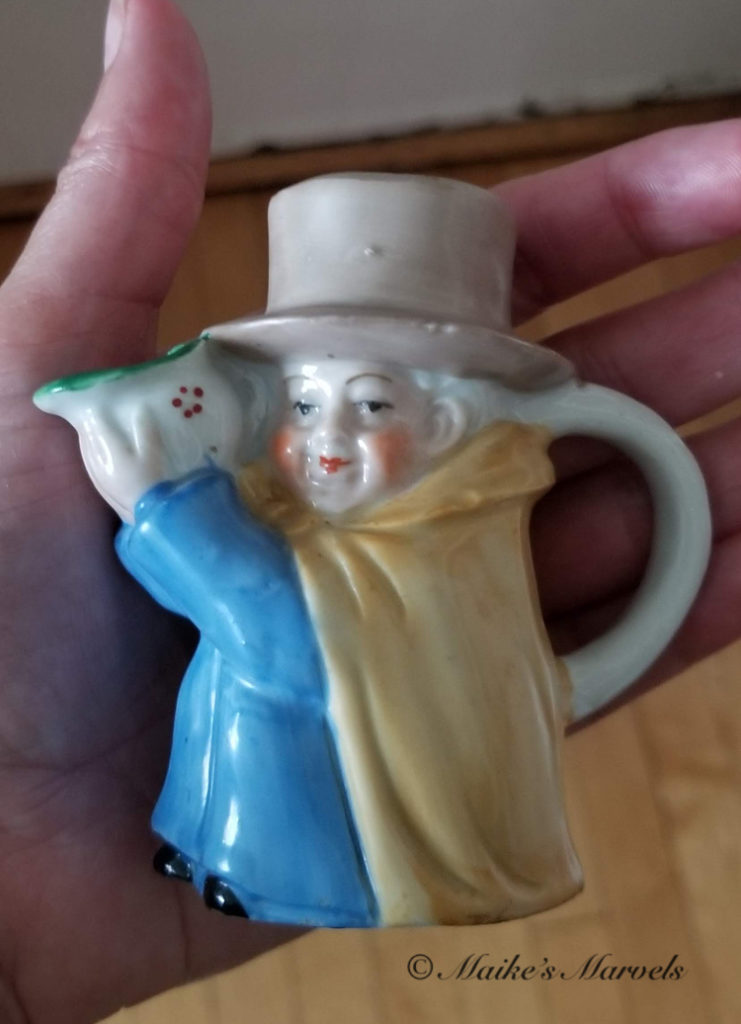 After that we were thirsty, and swung by Sketchbook Brewery to have a half-pint. 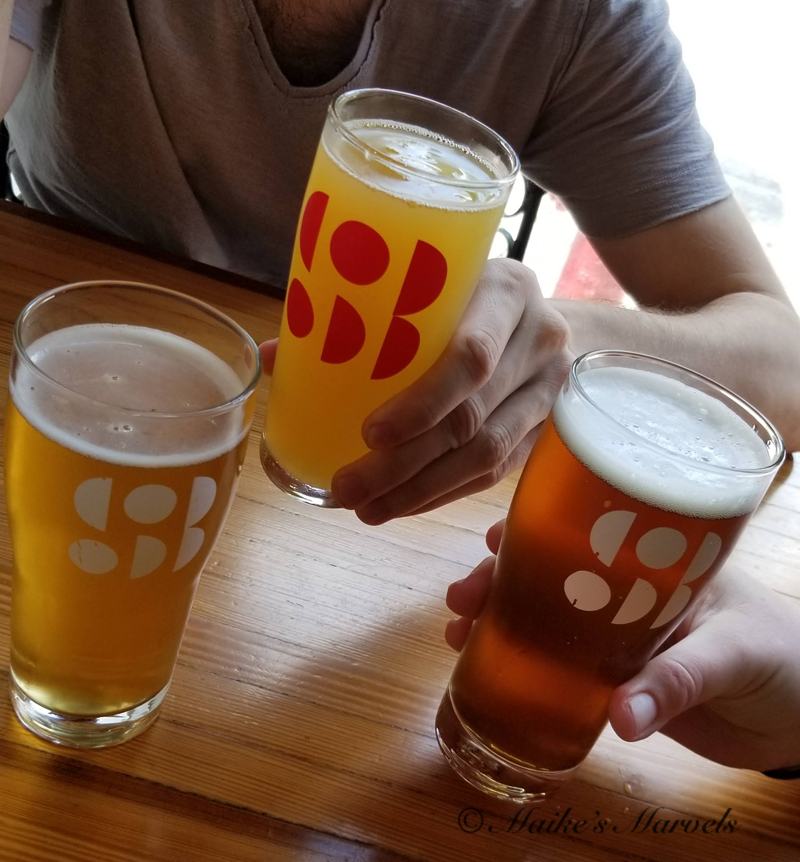 It’s easy to not leave Evanston in the summer!