Lately printmaking has been a theme in my life. Iâ€™ve become more aware of local print shops, there is a pop-up downtown I need to visit, and I am thinking more about impressions and linocutting in my own work. So when I saw that the Mary and Leigh Block Museum of Art had an exhibit called Prints and the Pursuit of Knowledge, I had to go and see it.

The exhibit features original and reproduced prints made from etchings done between the 1400s and 1600s.

I was impressed by the amount of detail involved in each, and the painstaking research done into making some of the sundial-contraptions work. Even though astronomical and medical ideas of the time have been superseded, it is obvious that accuracy blended with artistry was important to these engravers.

You can peruse old astrological maps, such as one excerpt from Astronomicum Caesareum. Visitors are allowed to touch a reconstructed globe based on old etchings and sundial samples. I also learned of JoannesÂ Stradanusâ€™ Nova Reperta.

Apparently the Netherlands became a hotbed of research and science during the 16th century, so I was introduced to lovely etchings of flowers and animals by artists from my homeland. Botanist Carolus Cusius created one of the first European botanical gardens at the University of LeydenÂ in the 1590s. 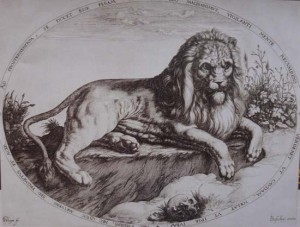 That university also boasted an anatomical theater, and a lively print promoting the public dissection is also in the exhibit. My favorite were the â€œpop-upâ€ books by Heinrich Vogtherr. He created anatomical drawings that were layered over each other, so you could flip from the skin to a flap with the muscular system, to internal organs etc.

Another lovely display was the Seven Liberal Arts.

You can see videos of the exhibit here. The Block Museum will host this exhibit until April 8, and admission is free. 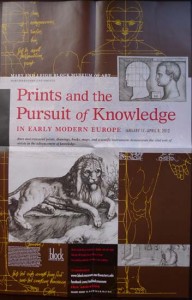