Juneâ€™s Wine Women and Wellness will involve some canine therapy, of the visual kind. We will gather at Sidetracked Studio, a brand-new Evanston-based gallery co-owned by artists Lauren Levato Coyne and Rory Coyne in partnership with collector Michele Mahon Jahelka.
Good Dog, BetterÂ Art is a Group Exhibition to Benefit Trio Animal Foundation, featuring the work of 16 canine loving artists. 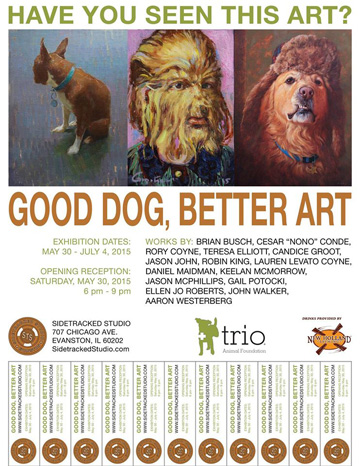 If we were to bring along our furry friends, they might be more inclined to look at portraits of their counterparts than their humans, according to a study by Helsingin yliopisto (University of Helsinki) and referenced in Science Daily.

Conversely, numerous studies attempt to validate the attribution of human behavior to dogs, and continuous to keep scientists engaged: â€œThis search for common psychological processes in humans and dogs has been motivated by the fact that humans and domestic dogs have shared a common environment and similar selective pressures for tens of thousands of years.â€ 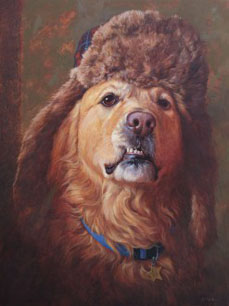 Anthropomorphism-the attribution of human characteristics to animals, deities and objects has been around since ancient Greece: â€œhumans are predisposed to perceive shapes, sounds, and other things and events in terms of human form or action, both in unconscious thought and in the conscious thought to which it gives rise.â€

â€œOver the last 100,000â€…years, the social environments
of domestic dog pups and human children
have become more and more similar to each other,
and less like those of either species’ closer genetic kin.
It is as a consequence of this intense cohabitation
that dogs have come to emulate some behaviors
that are commonly viewed as uniquely human,
such as the recognition of another’s attentional state.â€
~ A Review of Domestic Dogs’ (Canis Familiaris) Human-Like Behaviors

A study of domestic dogs identified several traits that are quite indicative of a small business owner as well. These include: â€˜Playfulnessâ€™, â€˜Curiosity/Fearlessnessâ€™, â€˜Chase-pronenessâ€™, â€˜Sociabilityâ€™ and â€˜Aggressivenessâ€™. Like small business owners, all traits were found in all dogs, though to differing degrees and with differences between different groups of dog breeds.

On Thursday, June 25 we will gather from 6 to 8 pm at 707 Chicago Ave. in Evanston to discuss the merit of these traits as business owners and for our canine companions.

NEW Co-Founder Karen McCormack owns a Belgian Malinois, a German Shepherd breed. â€œIâ€™ve always had rescue dogs, usually the breed is a guess,â€ Karen said. â€œIâ€™ve also had a couple of golden retrievers when my kids were small because they are well known to be gentle and tolerant.â€

Our hosts own a Husky and a Great Dane, both rescue dogs, who inspire and support our resident artists at the studio on a regular basis. NEW Co-Founder Maike spent her teenage years with Labradors, and is the aunt of 2 mixed breed rescues (a shepherd chow and a pitbull-bordercollie mix). 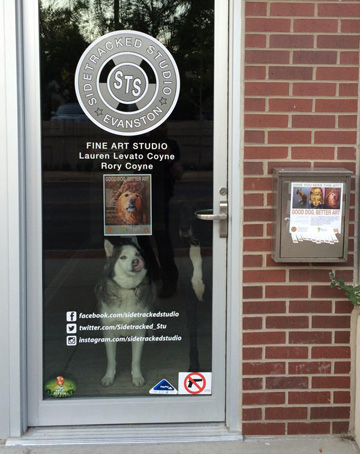 Good Dog, Better Art is a benefit exhibit for Trio Animal Foundation with up to 25% of all sales going directly to the Foundation. Matching funds will be provided by Apple, thereby doubling all donations.

Trio Animal Foundation is a woman-managed 501(c)(3) charitable organization that assists shelters, rescues and individuals by paying the medical bills of homeless pets. Trio specializes in taking in severely abused animals, and is responsible for numerous happy endings of animals that had essentially been fated to suffer agonizing deaths.Â  TAF also promotes adoption and responsible pet ownership, including spay and neuter. 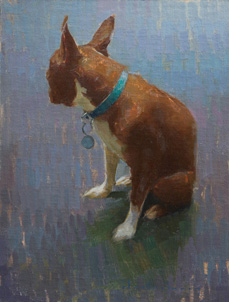 In addition to the works for sale, Sidetracked Studio will also accept donations on behalf of Trio Animal Foundation for the duration of Good Dog, Better Art. Sidetracked Studio is located on 707 Chicago Ave. Evanston and open Wednesdays through Saturdays from noon to 6 p.m. All other hours by chance or appointment. 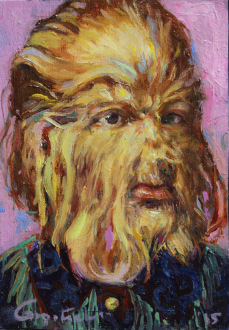 NEW â€“ The Network of Entrepreneurial Women is a group of Chicagoland business women who are upgrading business networking with fun and creative events that inspire attendees to work together, refer each other and most of all cheer each other on as the membership succeeds. Events rotate around various suburbs on a semimonthly basis, usually the 2nd Wednesday and 4th Thursday of the month. RSVP for our upcoming events at Meetup, or like us on Facebook and check up on the calendar there.