When I first moved in 2007, I knew I wanted to get a new bedframe and do a little jazzing up of the room. I splurged on a faux finish when I got the home painted, and then installed the necessities for sleeping and adorning, thinking I would at some point make a Morroccan themed boudoir out of the room. 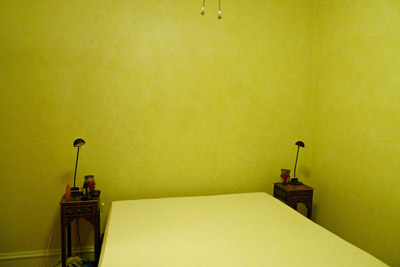 A few years passed, my life was too busy with deadlines, so I got new curtains and new sheets for the time being. I canâ€™t even find a picture of my â€˜originalâ€™ bedroom setup. It was that â€˜temporaryâ€™ to me. My metal bedframe gave out in 2009, so I moved the headboard and footboard into storage, and made do with a box spring on the floor. 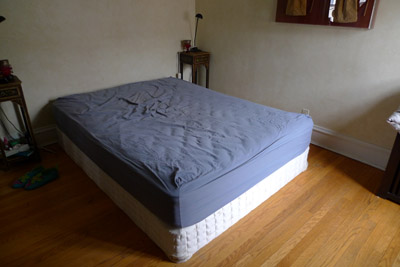 Three years later it was time to get a new mattress, but when I laid down on the Tempurpedic I realized I had some saving up to do. So another year passed during which I got recommendations about the mattress from those I knew, and in February I set foot into a mattress store again to splurge.

Then came the fun part, furniture shopping! Nadeau had just gotten a shipment from India in, and I swooned over two handpainted nightstands. I wanted to get a side-board of sorts too, but couldnâ€™t resist a corner cabinet. It passed the lift and load test, and I found myself hauling three pieces up the stairs that afternoon. My old nightstands sold on Craigslist the next weekend. My wall decor includes inherited Wayang dolls, a fiber arts art collage gifted from Egypt, and an Eastern-looking mirror. 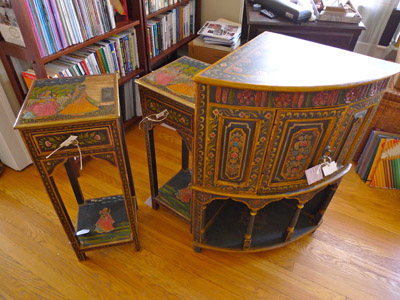 The bedframe was a bit more challenging, as American Mattress didnâ€™t have a platform bed option. The store manager called around and apparently my idea was â€˜out of styleâ€™ with her vendors. 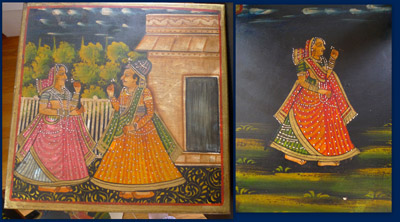 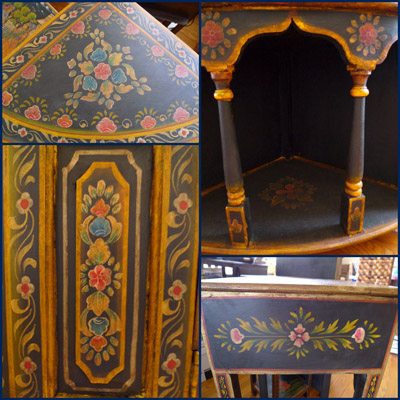 So on to the Internet I went, where a variety of platform beds were available, but I wasnâ€™t sure of their quality. Fortunately, World Market had an option, and luckily the Evanston store had a floor model I could look at and knock on to check its sturdiness. It passed the test, but Evanston had no frame in stock, so a suburban round-robin call ensued, and the South Loop still had 2 available. Into the car I hopped to place my order there, and arrange for delivery with the recommended contracted company. 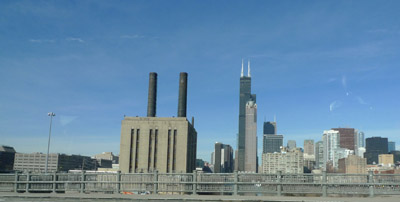 I ordered delivery and assembly, but the allotted time came and went, without a bed. So I had to reschedule for the next day. The next day two guys took the bed upstairs, and then set out to leave. No one had passed on the memo about assembly. So, the next morning, the assemblers came, and saw that one of the drawers was broken. Fortunately everything else was intact. 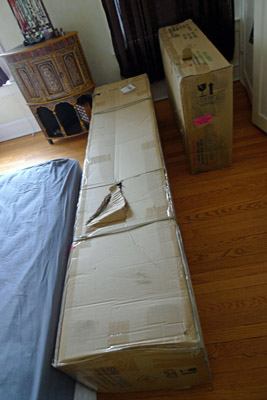 World Market was fantastic in offering me a replacement drawer, which it turns out took the South Loop store manager to St. Charles because this bed is no longer being carried in the stores.Â  I got one of the last ones in Chicagoland, with it now being an internet-only order. With the drawers complete, I could finally have the mattress delivered. 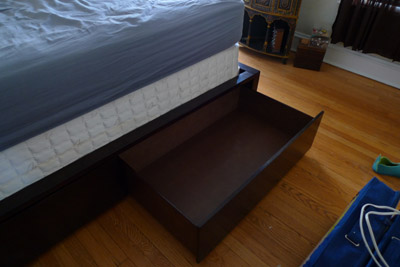 During the wait I had perused all the horror stories of how horrible the mattress smells, how for some it never went away, and I braced myself for sleeping on the futon for some time. It wasnâ€™t that bad, even for a sensitive nose like mine. To me, it smelled mildewy–in spite of it coming out of a new box and plastic casing. 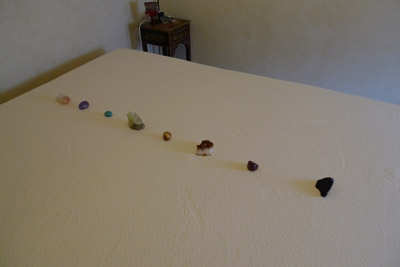 Of course the makeover called for a new duvet cover, which I found at World Market, and then some sheet sets to match from Target. After some contemplation I steered away from other fabric canopy designs floating in my head, since all the dust would likely aggravate my allergies, and it would crowd the room. Pinning ideas and inspiration was fun though. 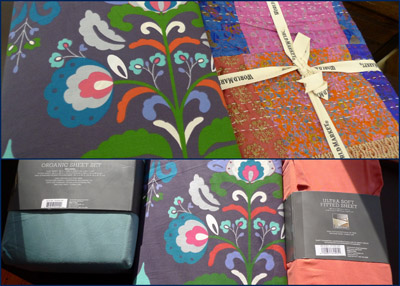 I aired out the room for a few weeks, burned incense, and gradually the smell got fainter. I could still smell it a couple of weeks after coming in from outside. 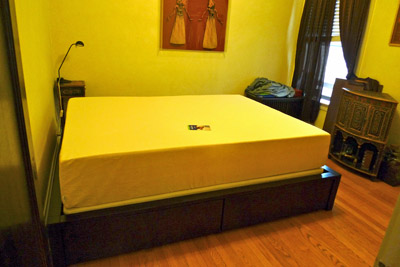 However, I decided to be kind to my back and sleep on the bed after 7 days. Spine trumped lungs in my case, or I might have given it an extra week. 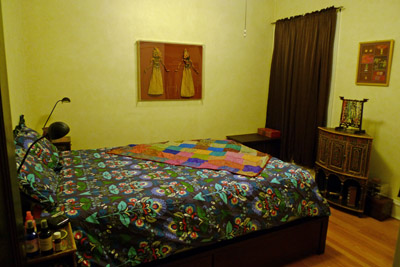 Then came the headboard design. Iâ€™d known Shelley from Single Stone Studios for a few years, and I always wanted one of her decals for my room. I sent her photos of my new furniture and the existing art work, and I knew I wanted butterflies incorporated. She sent me a gorgeous design that immediately spoke to me. She sent me some swatches to help me decide on color, and the chocolate brown matched my espresso wood perfectly. 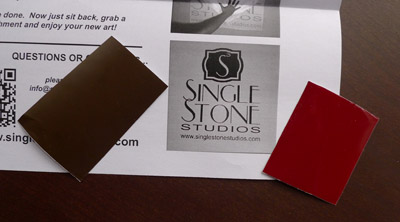 I received the decal quickly after placing the order, and it was a lot bigger than I envisioned (which has nothing to do with the measurements Shelley and I agreed on, I just pictured it smaller in my head even though I approved her dimensions and had measured it out that way before). So I needed to recruit help, and my helper arrived Sunday to assist in putting it up. 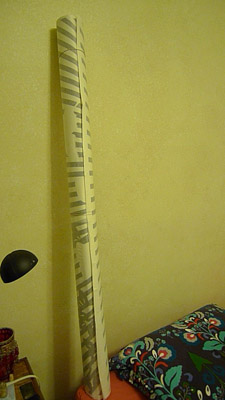 This gave my butterfly lady plenty of time to unfurl on my dining room floor. 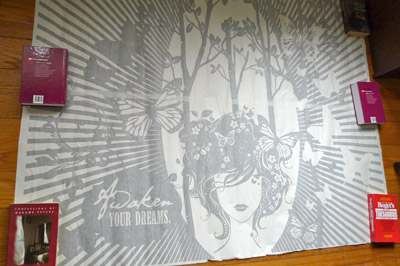 For something this size and intricate, I would recommend a professional installation. However, as much as I wouldâ€™ve loved to fund a girly weekend with Shelley in Chicago, that just wasnâ€™t in the budget this year. 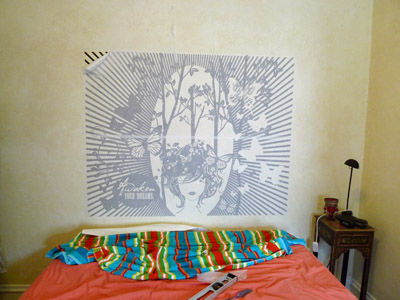 So Lauren and I worked our way through the installation, fixing mistakes here and there, but incredibly happy with the end result. My arms are still a bit sore from all the burnishing, but I slept oh so well Sunday night, and waking up to butterflies the next morning was a thrill. 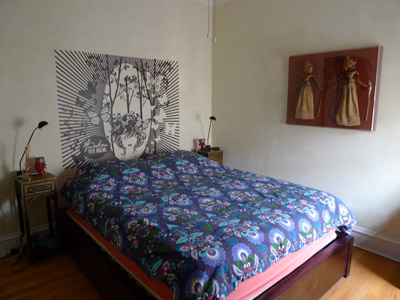 I may add some paper cut-out butterflies over time as I have seen on Pinterest, but for now, I am content with my new boudoir. 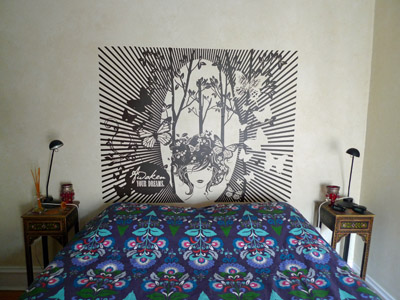 Hereâ€™s to awakening your dreams! 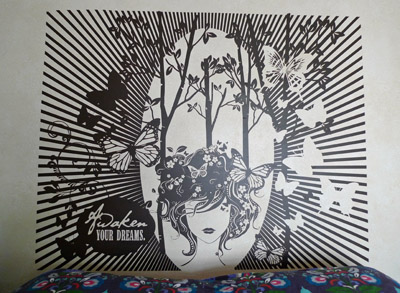