A month ago I was asked if I wanted to participate in an Alice in Wonderland themed project. How could I possibly say no? So I set about creating a piece for the current Alice production happening on the Main-Dempster Mile.

Alice is an ambulatory, multi-disciplinary theatrical experience. The audience, traveling in groups of 15, follows a white rabbit to various locations throughout the Main-Dempster Mile in Evanston. Ducking into storerooms and back patios, traipsing through stores and taverns and galleries, the audience IS Alice and the Main-Dempster Mile shopping district becomes a wonderland. 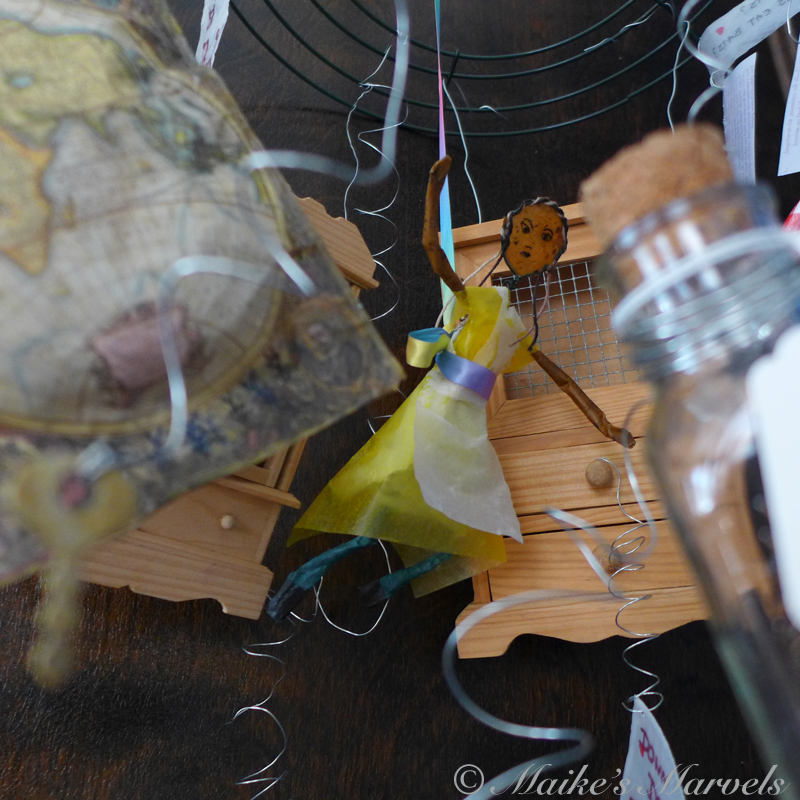 Chapters of the book are divided amongst Evanston and Chicago theater companies, visual artists, and filmmakers, and performed in the various locations throughout the neighborhood. You can get tickets here. 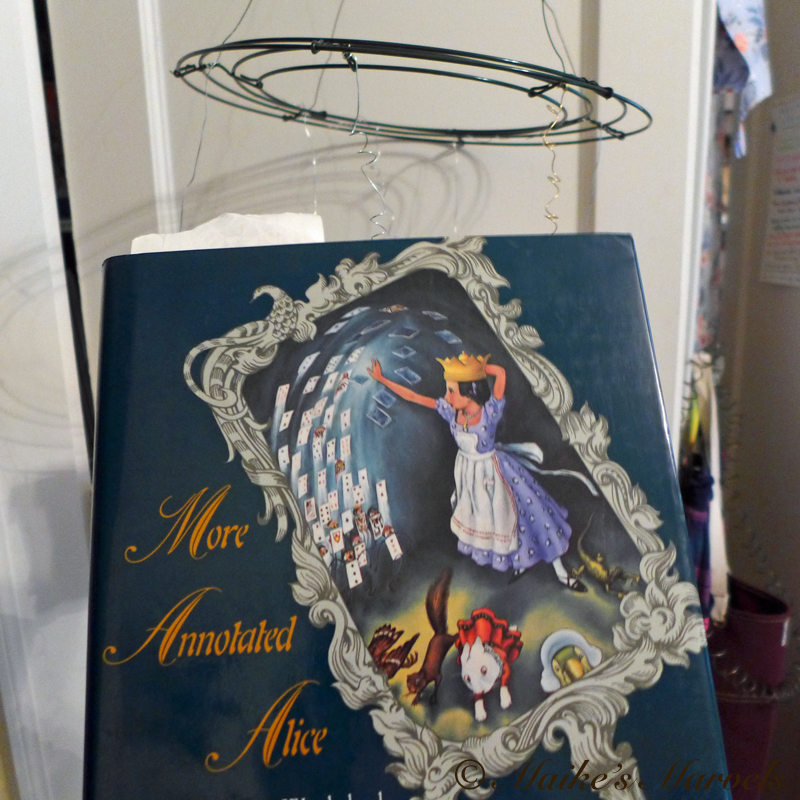 Regular performances are from September 22 – October 21, 2018 Saturdays and Sundays beginning at 1:00pm (tours leave in 15-minute intervals). All tours leave from August LaCapra State Farm, 829 Chicago Avenue, which is where my rabbit hole is located. Regular tickets are: $25 / $17 for students with ID. 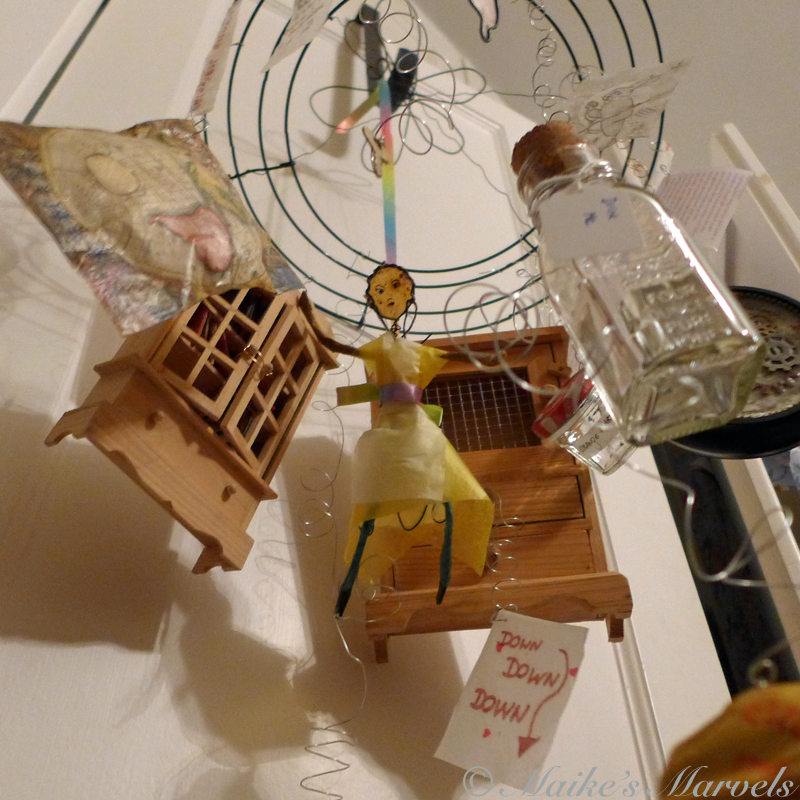 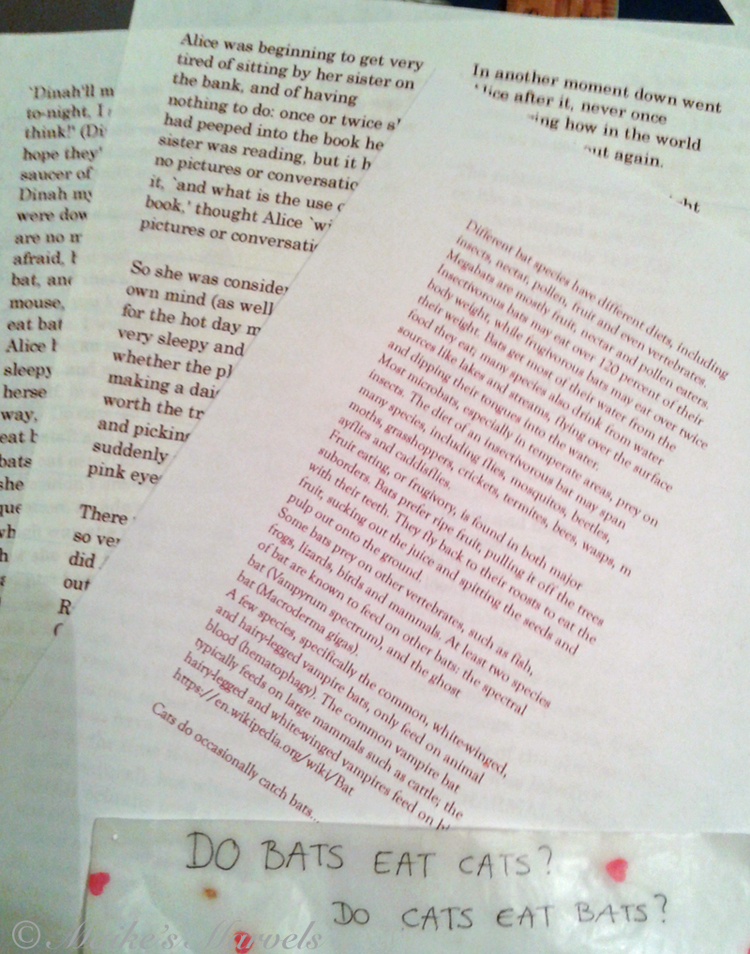 Numerous artists were tasked with perusing Chapter 1 of the story and creating art in response to it. I decided to go with a literal rabbit hole. I had the wreath ring leftover from my DOT show project and have been eager to experiment with a mobile installation. 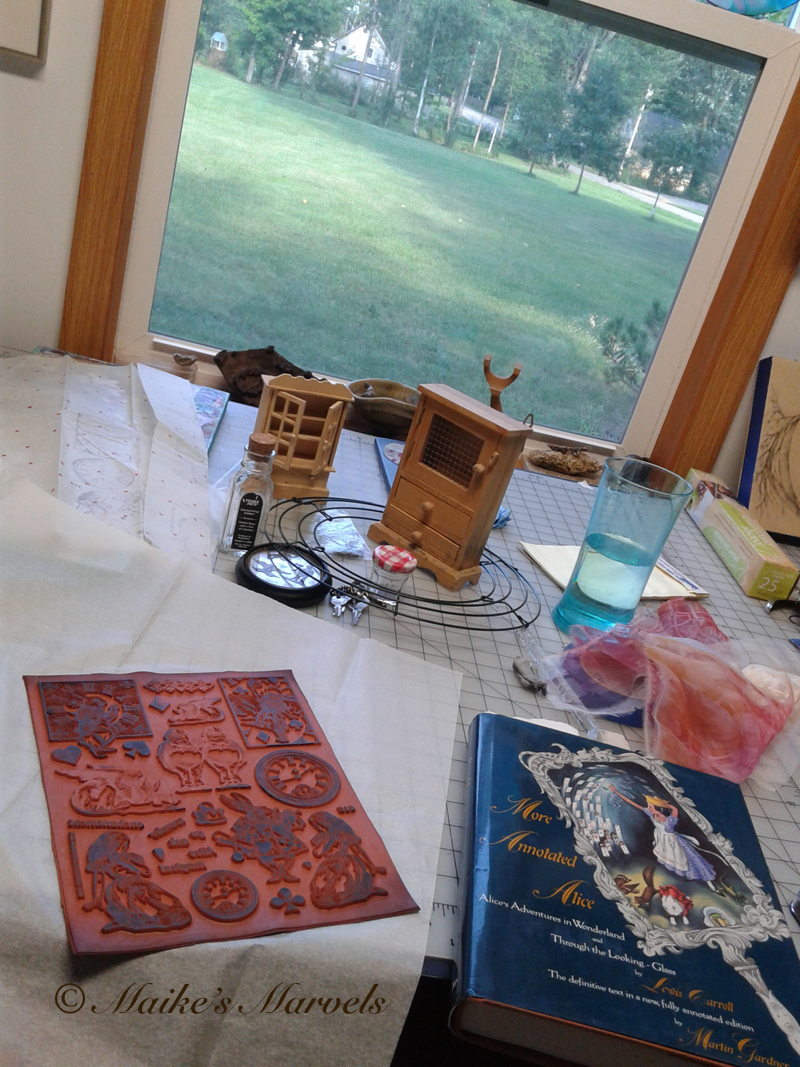 Unfortunately a trip to craft stores did not turn up dollhouse furniture, but my friend Carol had some stashed away in her cottage. When I mentioned my rabbit hole project, she immediately dug up her Alice In Wonderland stamp sheet. 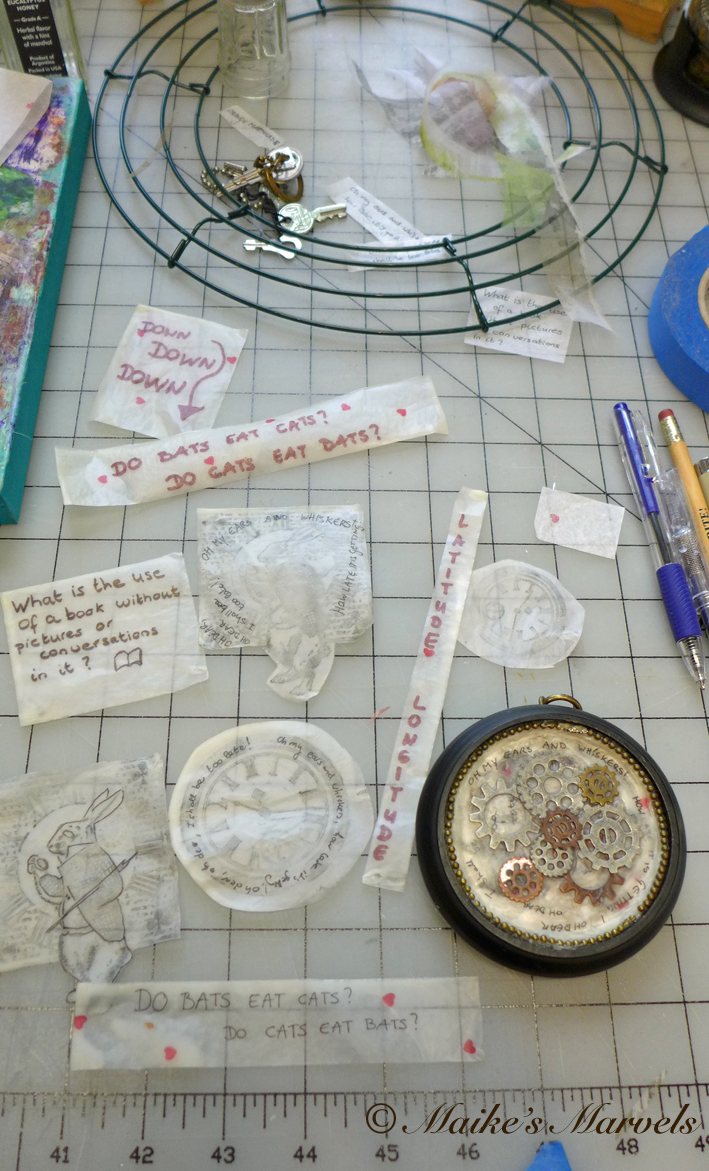 As I said out loud that I need a globe, Carol produced a globe stamp as well as globe paper! I took quotes from the chapter and hand-wrote them onto tissue paper.

I attached the globe to Alice’s musings about longitude and latitude. 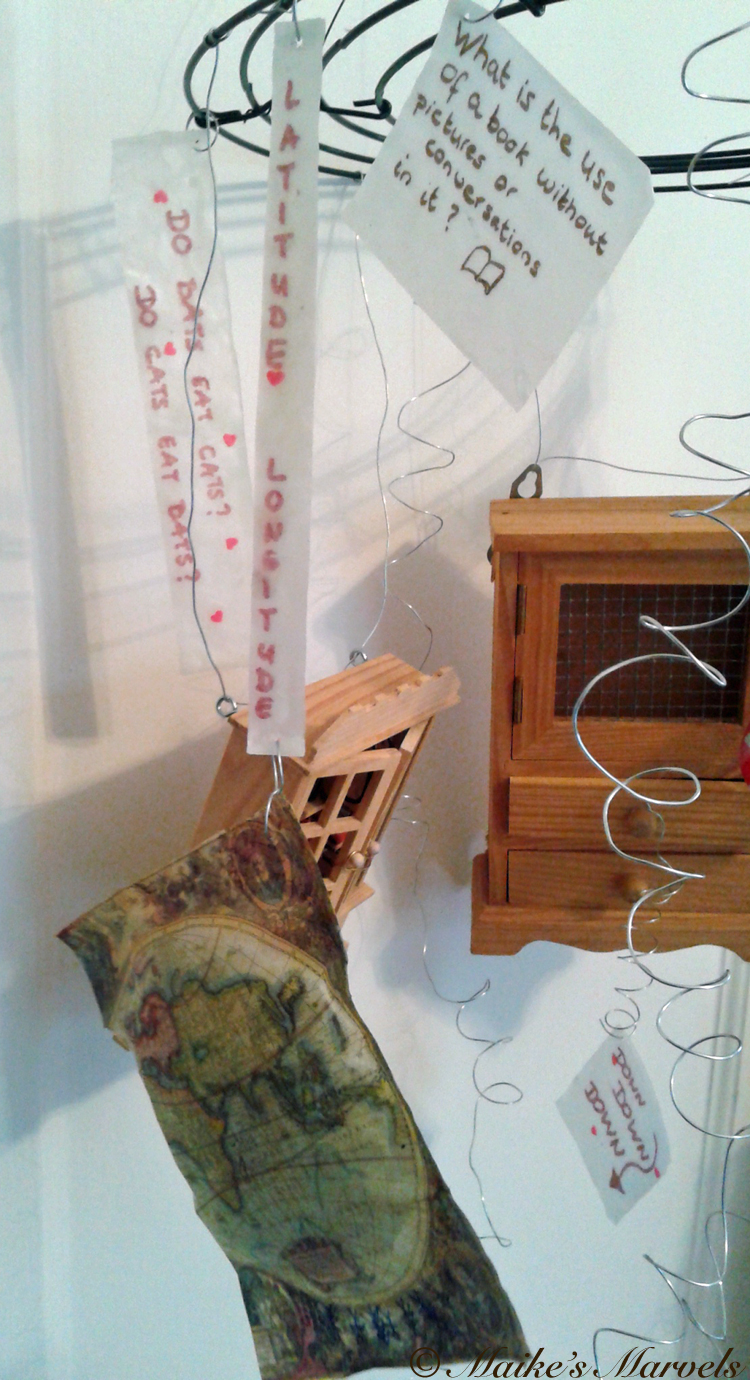 There are so many elements mentioned in the rabbit hole. I was happy to have a tiny jam jar for the empty Orange Marmalade Alice grabs on her way down. The drink me bottle was from a Honey Set Trader Joe’s marketed during the Christmas season.

I made an eat me cake out of paper. 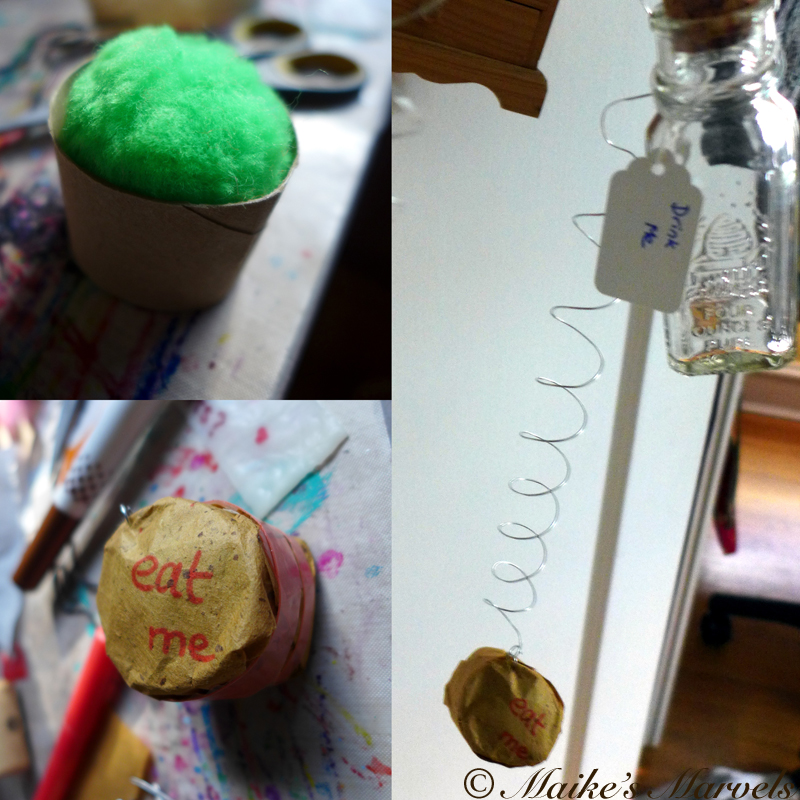 During my beading session with my friend, I scored some gears for the White Rabbit’s watch. I had found the watch base in a local thrift shop for 50 cents. With some watch face stamps, the rabbit’s panic over being late, and some encaustic pouring, I soon had the Rabbit’s watch. 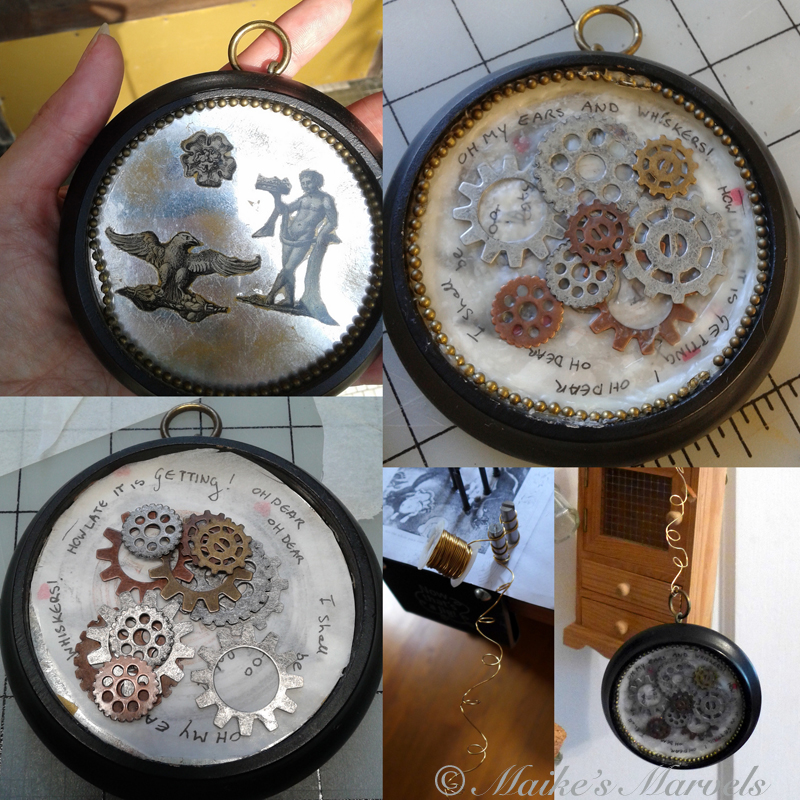 At home I sanded and vinegared the lovely bookshelf and pantry and gave them a sunbath after years in a dusty basement. Then I origami-d some mini books for the book case. This felt reminiscent of my Boudoir project a few years ago. I couldn’t resist making some wax and wire books as well. 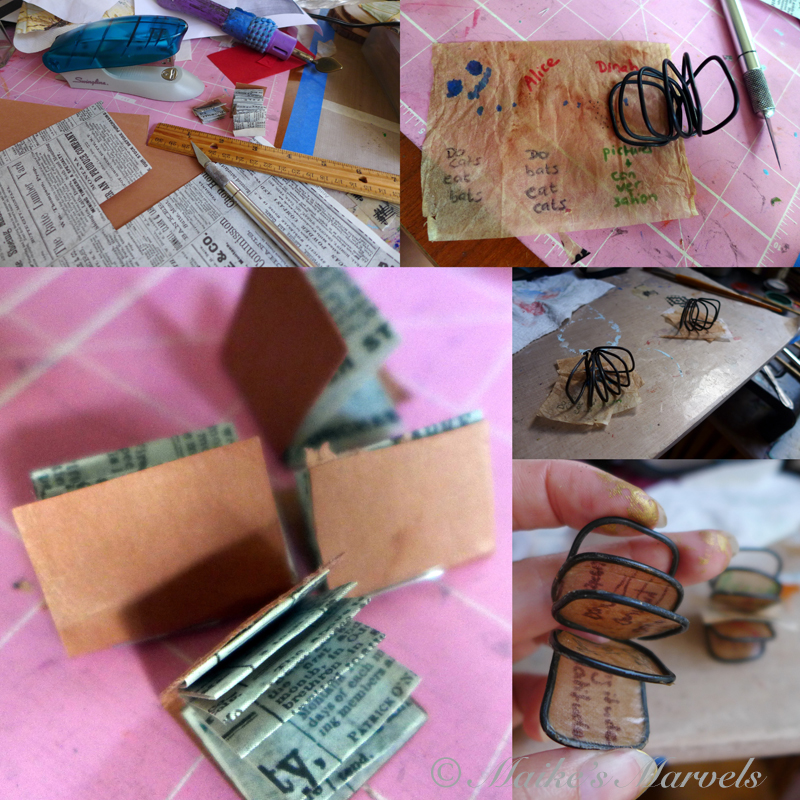 Now Alice has plenty to read, with illustration and conversation!

Alice herself was a multi-week thought process. I wanted to make a telescope Alice and a 3-inch Alice, but didn’t quite know what shape she would take. 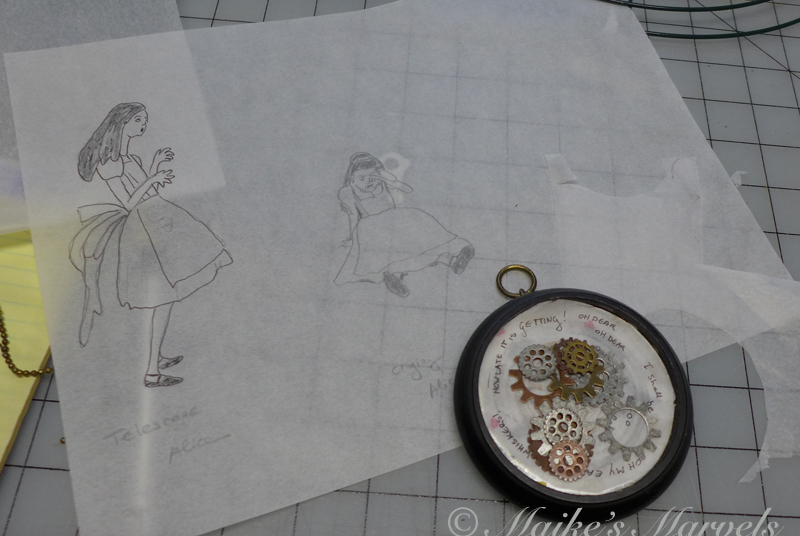 From the book we shrunk down a 4-inch alice to three inches to be the smaller version. Then I placed that image on my Now That’s A Jig! to outline the little Alice. It took a few tries to get her to fit. I like the Alice shape on its own too! 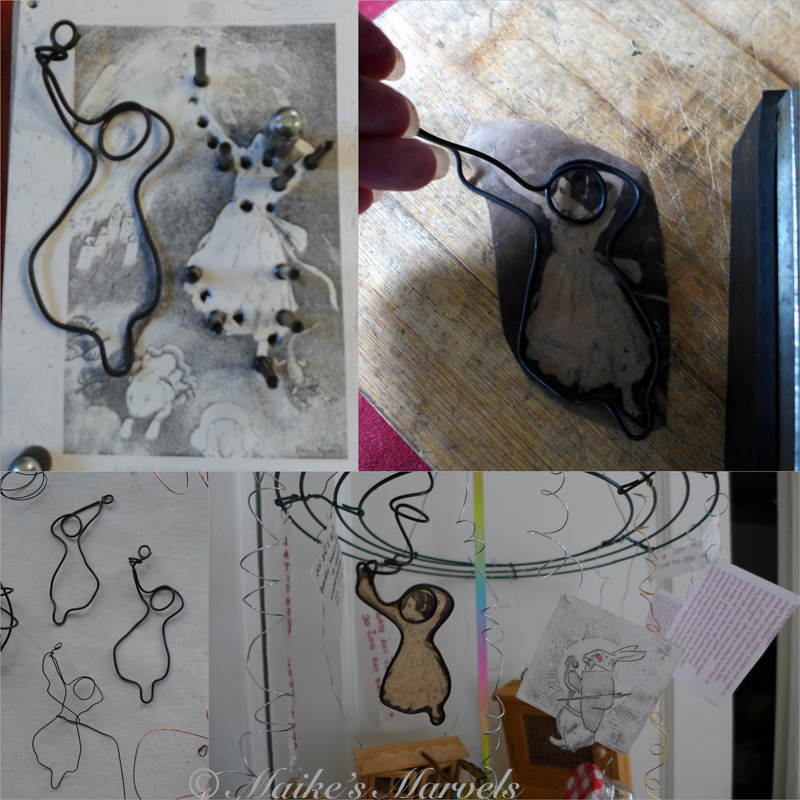 I traced the telescope Alice, and later also pulled her image from the internet to print it (easier to manipulate in photoshop than the book version of the same). 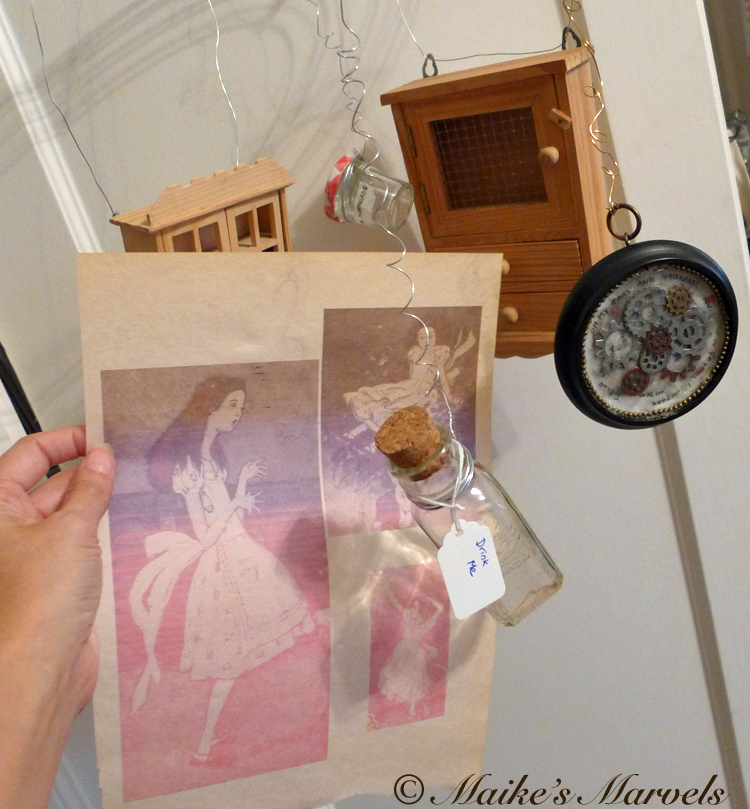 Soon I had Telescope Alice dipped in wax. My book uses the Peter Newell illustrations. 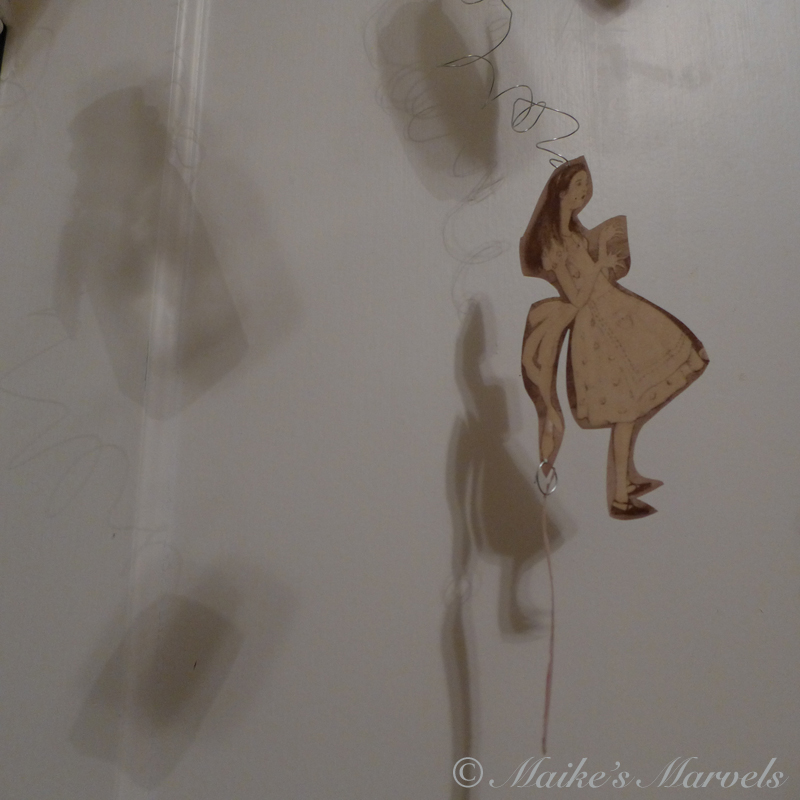 I verified that bats do not eat cats, but am sad to say that sometimes cats do catch bats. 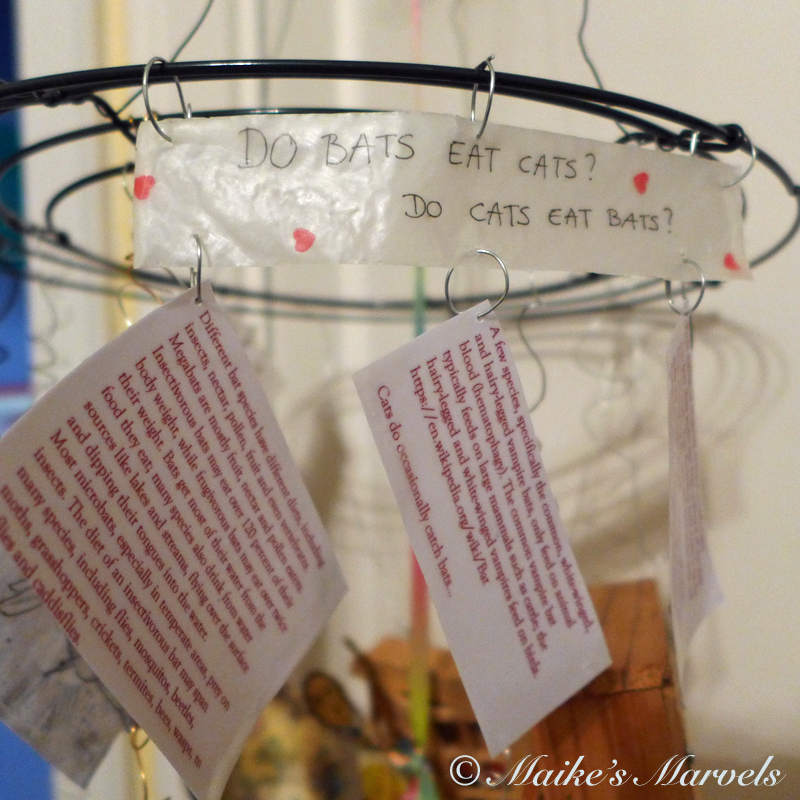 A few days later the major components of the rabbit hole were finished. 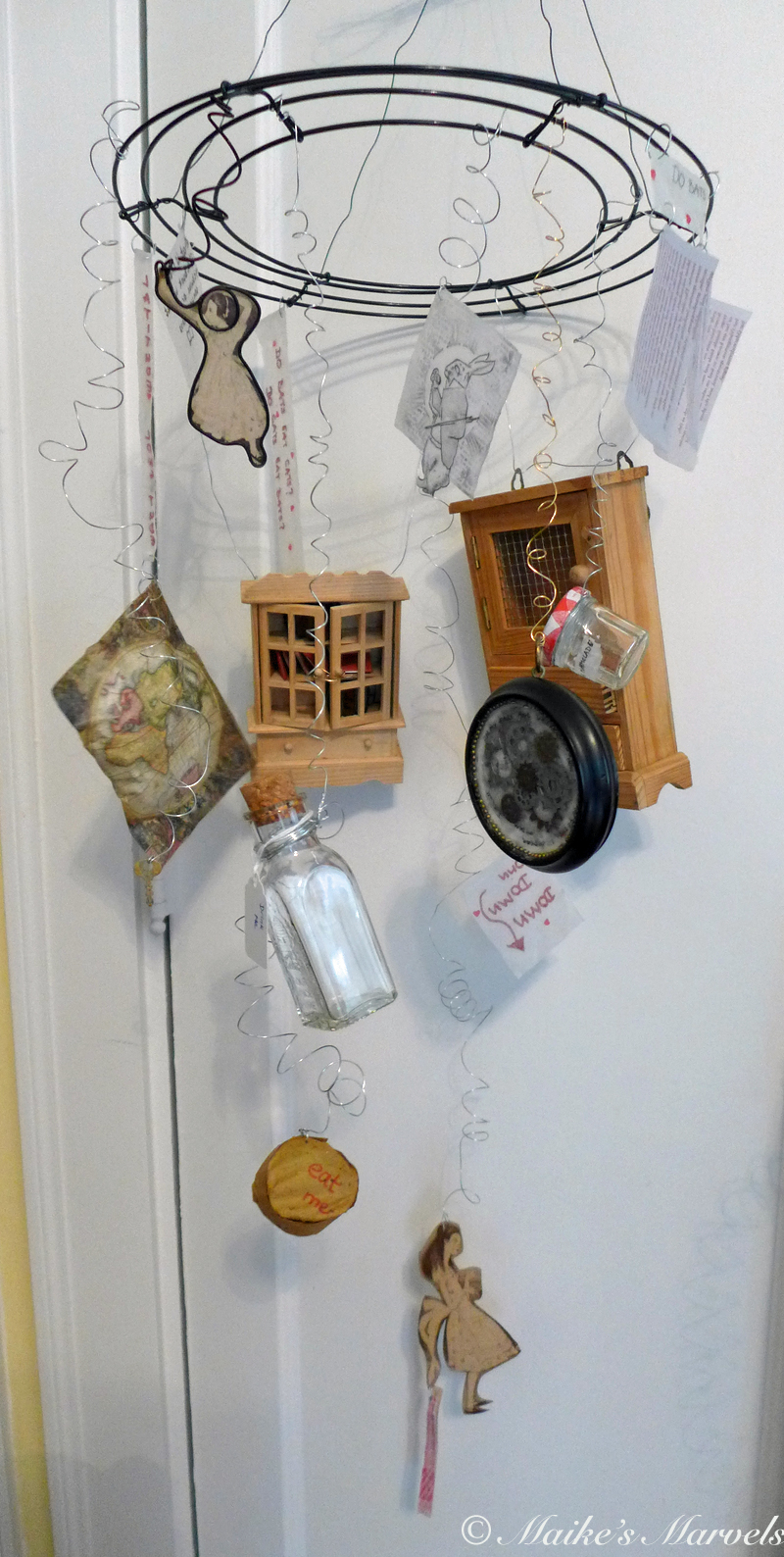 Then I took up Carol’s suggestion of making a 3-D Alice. YouTube tutorials helped me create her wire frame. 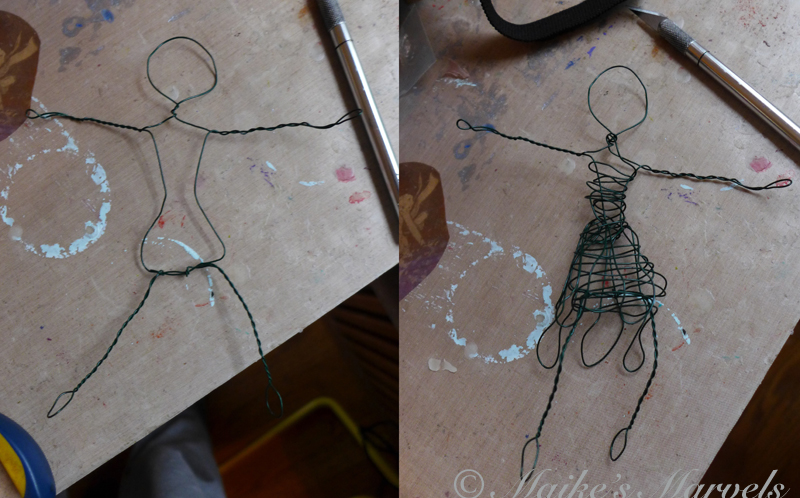 I researched her dress, since I don’t take Disney at face value for their tales. I found out the original first color edition of Alice by John Tenniel featured her in a yellow dress. In some of these she even looked like a redhead! 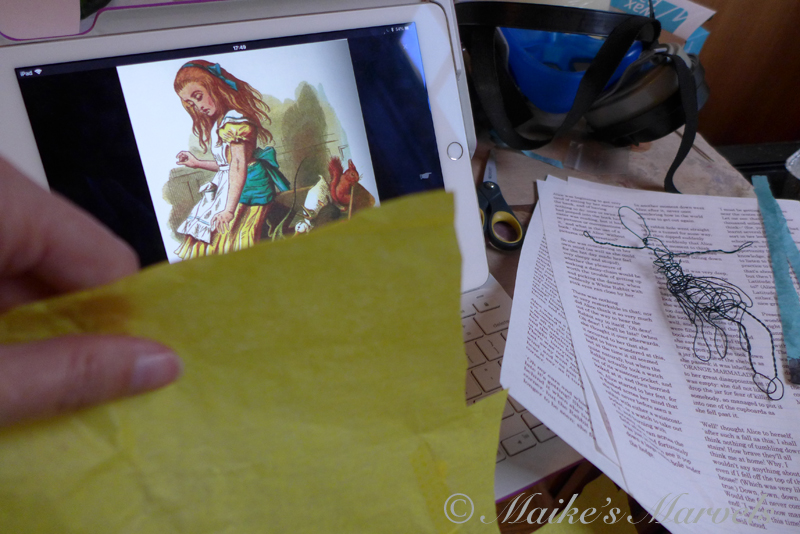 I gave her green stockings like the picture. Of course a proper Alice wears a petticoat, especially when flying through the air! 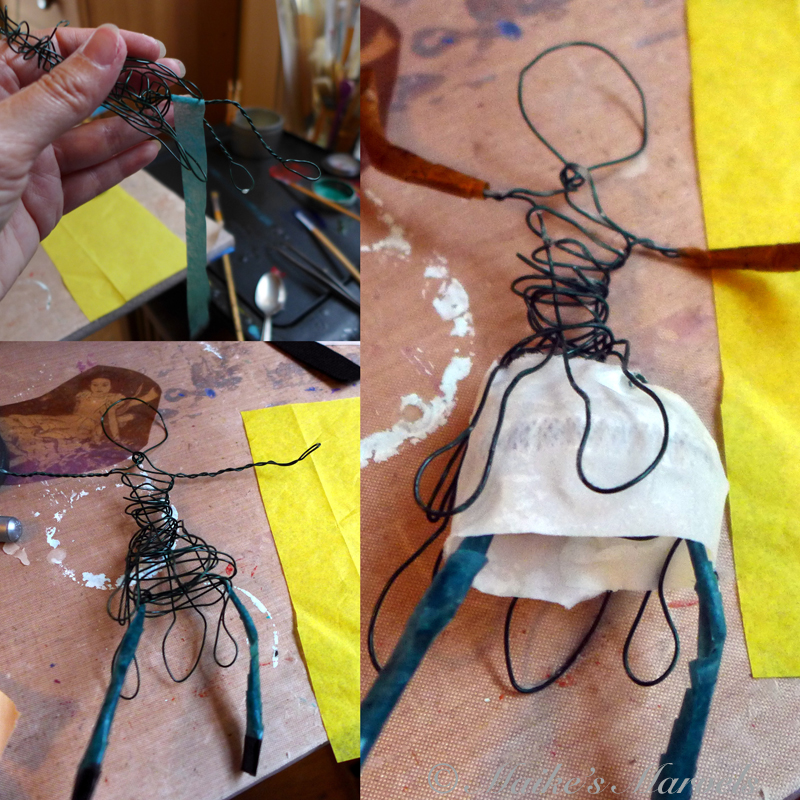 I also tried to give Alice hair, but the full head of hair wouldn’t have worked with the waxed-on face, so I will have to practice that technique for later. 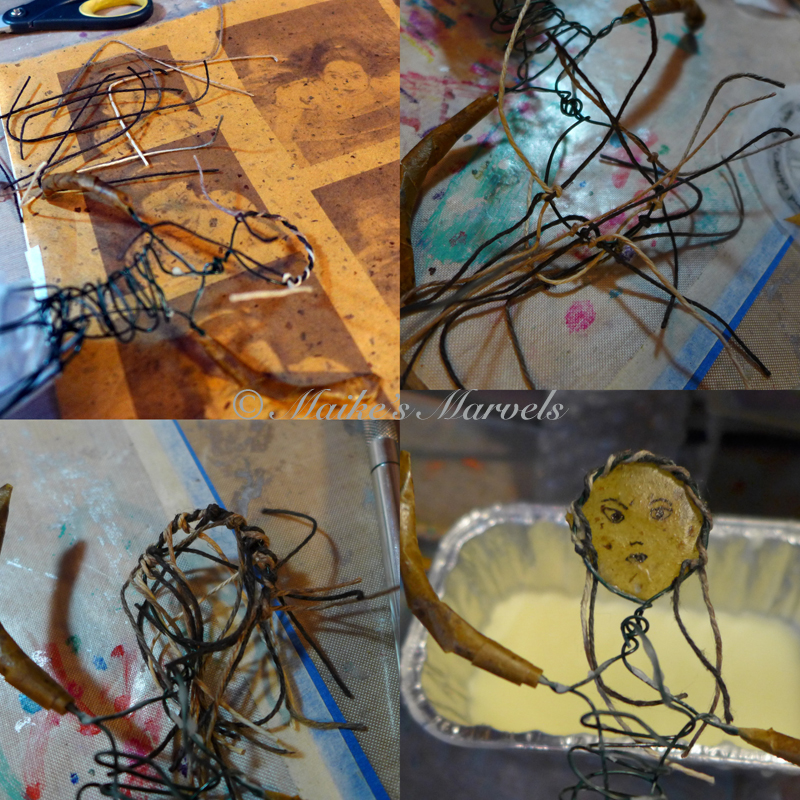 After her dress came the pinafore, which took some sizing. 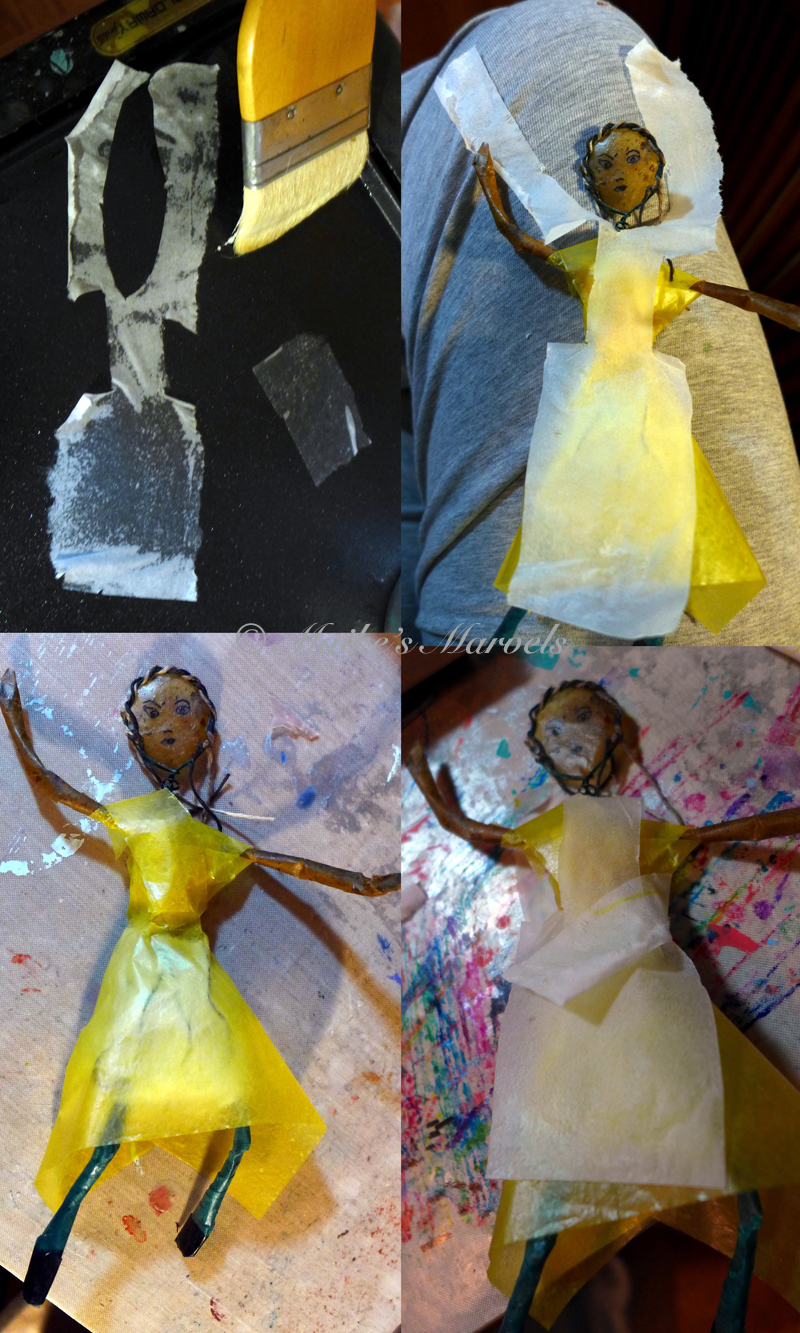 It was such fun to make this mobile, and I hope the audience gets a spark of joy out of it too. I got a peek at the other artists’ works during my delivery, and the variety of interpretation and skill level is amazing. 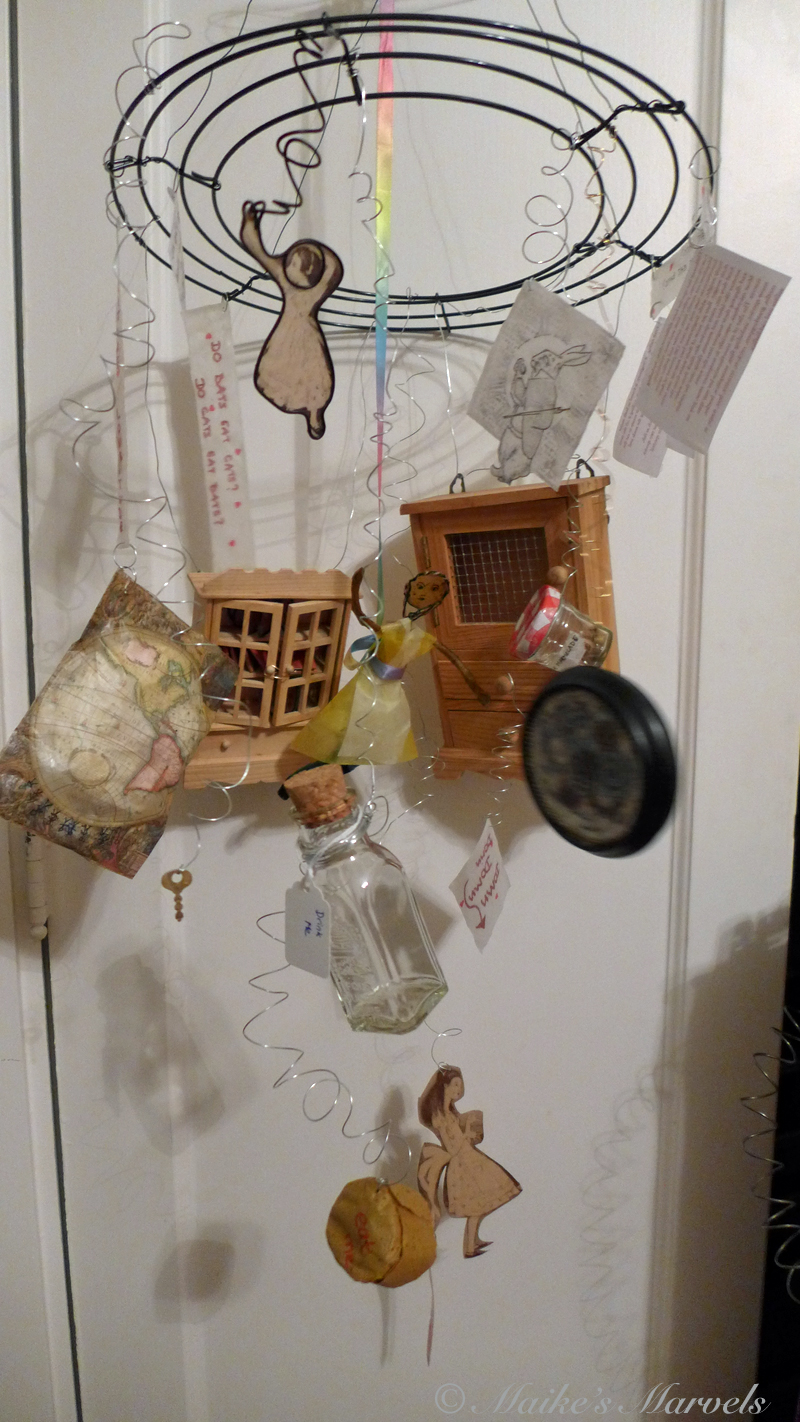 This show takes place both indoors and out and will commence rain or shine.  There are no refunds unless the show is officially cancelled—because Alice isn’t scared of a little water. This performance of Alice is supported in part by the Evanston Arts Council and lots of generous help from the Main-Dempster Mile SSA. 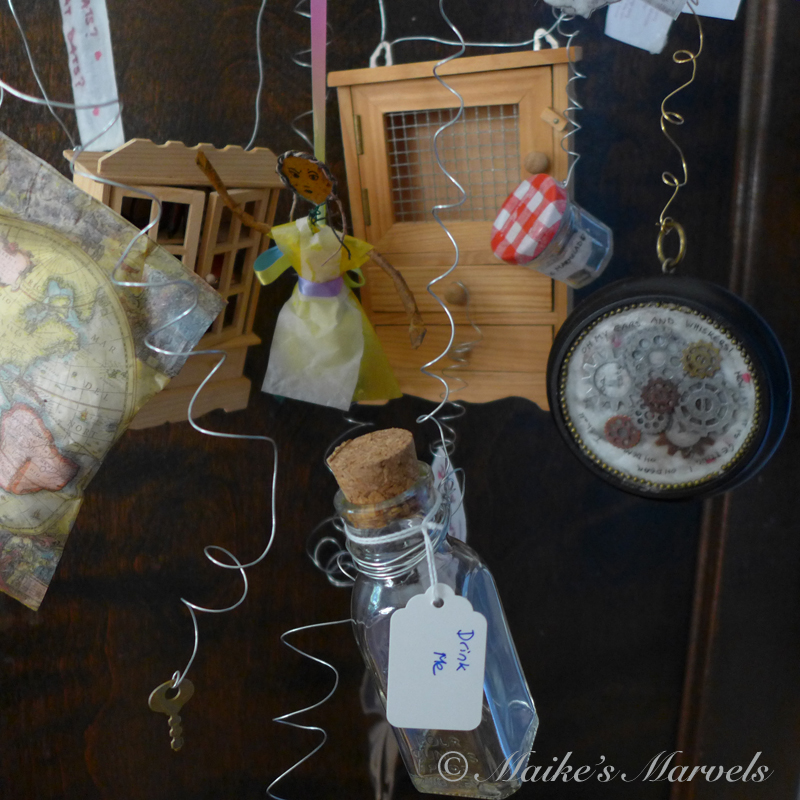