On Tuesday I attended the Black History Month Innovation Panel hosted by WIN. The panelistsâ€™ credentials were impressive, and it felt like quite the scoop to be among such celebrities.

What I did not expect was how down-to-earth these amazing entrepreneurs are. Press releases and online bios show a lot of glitz and glam (especially for the ladies in the entertainment industry), but from the get-go the atmosphere was warm and inviting.

Four fourth grade children of Turner Drew Chicago Public School had created posters about our panelists for their Black History Month project, and other posters lined the walls. 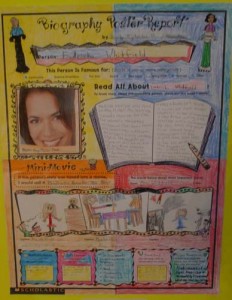 What they learned during their research, and moderator LeeAnn Trotter pointed out:

Growing up loving Barbie dollâ€™s clothing, Barbara BatesÂ always knew she wanted to be involved in fashion. As a sophomore she got pregnant and was sent to a â€˜specialâ€™ school. When she transferred back to her regular school after her son was born, she had enough extra credit to graduate a year early at 17, with honors. While her mother took care of the baby Barbara worked at a bank.

She would wear her self-designed clothes to work, where coworkers would ask to buy them. In 1986, a partner invested in her business and she hired four sewers. She designed for Michael Jordan, which led to designing for other celebrities such as Whitney Houston and Oprah Winfrey. She is part of the upcoming TV Show Fashion Star. 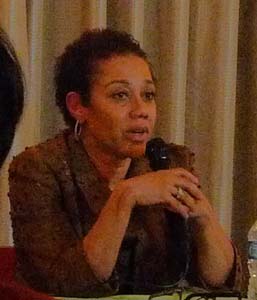 â€œI didnâ€™t have a business plan but I had a passion.â€
~ Barbara Bates

Stating that she isnâ€™t the most talented, Barbara quipped â€œMy grandmother would always say, â€˜youâ€™re not the cutest of my grandkids but youâ€™ve got a nice personality.â€™ You sell yourself first and then you sell your product.â€

Regina TaylorÂ always wanted to be a writer.

â€œThe ability to write your own imagination down
to create worlds within worlds with little girls that looked like me
was the way I could begin to create my world.â€
~Â Regina Taylor

Through a journalism class Regina was asked to audition for a movie with Joanne Woodward. From there she went to New York. After â€˜doing the struggling bitâ€™ she became the first black woman to play Juliet on Broadway in Shakespeare’s Romeo and Juliet.

â€œIt was a good time to be in New York.
Seeing all these worlds within blocks and being inundated with arts.
You could walk down the streets and see entertaining things.â€
~Â Regina Taylor

She later played the role of Lilly Harper on the TV show I’ll Fly Away. In addition to acting, she is also a playwright. She is currently working on the Goodman Theaterâ€™s summer 2012 production of Crowns the Gospel Musical. 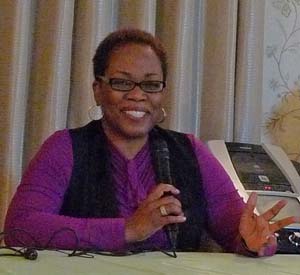 â€œIt is interesting to be able to cross different mediums
and fulfill dreams.
You first have to be able to dream
and then to fulfill them.â€
~ Regina Taylor

Brenda Palms Barber wasnâ€™t as clear as Barbara and Regina on her dreams as a child. â€œI didnâ€™t know what I wanted to be at all when I grew up,â€ Brenda said. She remembers listening to her peers in the playground discussing what their parents wanted them to be. When she asked her mom that day: â€œMom, what do you want me to be when I grow up?â€ her mom responded: â€œI just want you to be a good citizen.â€

â€œI was really disappointed. â€¦
But then I saw the blessing.
My mother didnâ€™t frame an expectation (of who I should be).â€
~ Brenda Palms Barber

Brenda embarked on a career in nonprofit organizations, starting as â€œthe girl who buzzes you in at the YMCA.â€ She identified a passion in workforce development. When a person finds work â€œthe person begins to restore a sense of who they are,â€ Brenda said.

Then she was asked to find jobs for a community on the West Side of Chicago and encountered what has been termed â€œThe new Jim Crowâ€ when 60 percent of the population of North Lawndale had been incarcerated. Her task was to find jobs for these ex-offenders, which proved virtually impossible. She realized that if no one was going to provide her with job openings for her charges, she would have to create jobs herself, and founded Sweet Beginnings, LLC. 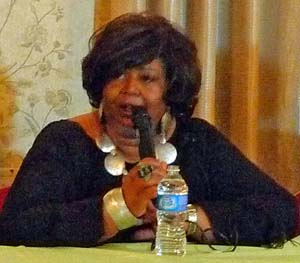 â€œI hope we will no longer be #1 in the world when
it comes to incarceration.
There are 2.3 million people behind bars in this country.
90% of men and women will return
to communities after incarceration.
We have to recognize it isnâ€™t going away.â€
~ Brenda Palms Barber

This statement has particular relevance for Barbara, whose second son is in prison. Days after she learned of his 19-year sentence she found out that she had breast cancer. 17 rounds of chemo and 35 radiation treatments later, Barbara was in remission and began advocating for the release of her son and for lower prison terms for non-violent drug-related crimes. Her story about her son reminded me of this New Yorker article.

Challenges have only made each woman stronger, however.

â€œIâ€™ve been challenged from age 16 until now.
It was not an option to fold up. â€¦
I came to work after (undergoing) chemo because
I had people depending on me.
I had to go to work.
I didnâ€™t have a 401(k) fund, I didnâ€™t have AFLAC. â€¦
You do it just because you have to do it.â€
~ Barbara Bates

Brenda is inspired by Maya Angelouâ€™s writings, and in particular quoted a passage from â€œNew Directions.â€

“I looked up the road I was going and back the way I come,
and since I wasn’t satisfied,
I decided to step off the road and cut me a new path.”
~ Annie in Maya Angelouâ€™s New Directions

Facing pressure about how she would expand, Brenda wasnâ€™t always sure of the â€˜how.â€™ Listening to her customers and staying true to her vision, along with holding fast to her faith led her to solutions. When customers told her that they wanted to see her product in Whole Foods, Brenda approached the company, which started carrying Beelove in 2007. The product is now distributed in five more states.

â€œPeople love to tell you what canâ€™t be done.
It bothers me and it hurts my feelings.
But then Iâ€™m like: Are you kidding me? â€¦
I took their criticisms and turned them into strengths.â€
~ Brenda Palms Barber

Another goal was to have a beehive at an airport and sell the Beelove line to tourists as souvenir gifts from Chicago. This will now be the case at Oâ€™Hare. The vision continues on a broader scale: â€œI want to help people rethink what green looks like. The bee and nature is a beautiful thing and we have to connect with it in the way we are.â€ (not necessarily wearing Birkenstocks and shunning make-up) â€œI like my make-up. That doesnâ€™t mean I canâ€™t connect and be a good steward of this planet,â€ Brenda said. 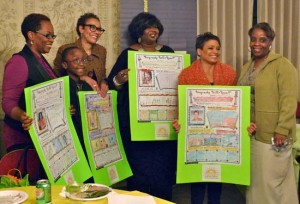 And while these women are proven success stories, they continue to face challenges, like anyone else.

â€œI have learned to believe more in myself.
I often give power away to others. I needed others to believe in me.â€œ
~ Brenda Palms Barber

Regina concurs that we often are the biggest culprits in not moving forward.

â€œWe have obstacles in our lives and a lot of times
our biggest obstacle is ourselves.
Sometimes we get focused on the cannot
and we canâ€™t see beyond that.â€
~ Regina Taylor

Regina is inspired by her grandmother who one day packed up everything and moved to Dallas with her 9 children in tow. Her husband believed she would come back, but she never did.

â€œThere is always a way, we just have to commit to that.
There is hope. Iâ€™m here because of their prayers.
You find that way.
If there is no door that you can knock on,
then you go and make that door.
There are people who are angels among men.â€
~ Regina Taylor

Barbara stated that sometimes oneâ€™s own community can be the most condescending. She often faces criticism for her high-end products.

â€œA lot of work I do is with African Americans and
we are the ones that pull ourselves down.
Iâ€™ve not noticed it from other groups.
I hear it from people just like me.â€
~ Barbara Bates

Knowing exactly how ridicule and exclusion felt as a pregnant teen, Barbara ensures others learn that they are not alone. When she was asked to speak to a group of teen moms years ago she promised each of them a prom dress if they graduated from high school. Although she didnâ€™t think of herself as a speaker she agreed to additional engagements for the next six years because â€œsometimes you donâ€™t know where your help will come from.â€ She made prom dresses â€˜under coverâ€™ for 10 years.

After being asked about a dress for full-figured girls, the Barbara Bates Foundation was established (in 1999), which has provided 1,000 prom dresses and tuxedos to students. â€œI just want to reach out and make them feel special as they should on prom night,â€ Barbara said. 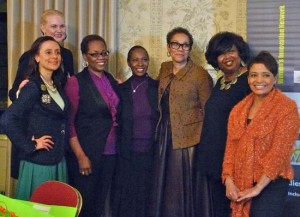 While each of these women are making a difference in their communities, advocating for those who do not have a voice, and becoming the role models they didnâ€™t have while growing up, they each see a need to keep moving (and paying it) forward.

â€œThere are still opportunities for us to pioneer.â€œ
~ Brenda Palms Barber 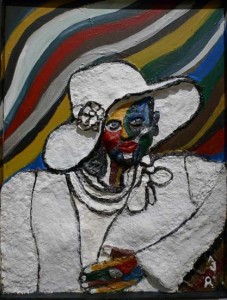 Dinner was served by Chef Aleta of Loquacious Catering and Chicago Chocolate Tours provided dessert via Toni Patisserie. More photos can be viewed here and video of the event (by Final Draft) will soon be posted on the WIN YouTube channel.

ADDENDUM: As of March 10, 2013, I no longer support the WIN Board and its actions. However, I do support small business, women-owned businesses, and the gracious hosts of past WIN events.